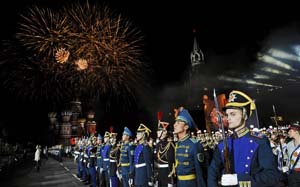 The festival opened on Sept. 4 with a display by the Special Guard Company of the Presidential Regiment of the Russian Federation and the Cavalry Escort of Honor, accompanied by the brass section of the Presidential Orchestra of the Russian Federation. The delighted spectators were able to see displays of posting foot guards and mounted guards, as well as expert formation and rifle drills.

The festival has also featured foreign participants performing music the theme of their own homelands. The military band of the Northwest Military District of France played the famous melody “Les Champs-Elysées.” The U.S. Army Europe Band and Chorus, under the command of Lt. Col. Beth Steele, took the capital by storm from the first minute, as soon as notes from the hits from the king of pop, Michael Jackson, rang out across Red Square. Artists from the U.S. also showed off some dance moves during their performance of Jackson’s biggest hits.

A combined pipe band from the European Union, which included 40 members ranging in age from 14 to 87, played “Amazing Grace” and completed its performance to applause from the stands with the famous old Russian song “Smuglyanka.” The spectators were also delighted by the Kingdom of Bahrain Police Band, making its first appearance at the event. The band played “Katyusha” in Arabic style.

The National Presidential Orchestra of the Ministry of Defence of Ukraine staged a “hopak” Cossack dance in the center of Moscow to fiery Transcarpathian melodies; the “Kabardinka” folk dancing ensemble presented real Caucasian horse riding stunts, and the military brass band of the Commandant’s Regiment from Tajikistan formed the Star of the East on the paving blocks of Red Square during its drill. The main surprise Tajik performance was the drill performed by musicians playing ancient surna and karnay instruments and accompanied by a women’s dance group.

Classics were also played at the festival. The military band of the Bundeswehr, for example, played works by Richard Wagner and Dmitri Shostakovich with a platoon of drummers and trumpeters from the staff band of the armed forces of Germany.

The Spassky Tower international military music festival will continue on Red Square until Sept. 9, and a surprise awaits the guests on the final day. Mireille Mathieu will perform at the closing of the festival, singing several songs, including the famous composition “Le temps des lilas” [“The time of lilacs”] to the tune of “Moscow Nights.” This song will be performed in the French and Russian languages, to the joint accompaniment of a band from France and two Russian ensembles.

“Our festival will show the national color and energy of the participating countries, including Russia,” said Lt. Gen. Sergei Khlebnikov, Superintendent of the Moscow Kremlin commandant's office of the Russian Federal Protection Service. “Inherent in the festival is a huge focus on integration, which I like very much. Military music ensembles from Kazakhstan, who are traditional participants in our event, will also march onto Red Square. I should note that they are half a step ahead of us, and this year we’ll try to catch up with them. Completely new ensembles, not yet known to our spectators, have come from France, Israel, the USA and Bahrain. I think this expansion of the boundaries of military music culture is a mark of recognition towards us.”

Before the main presentation began, there were striking displays by the Cavalry Escort of Honor of the Presidential Regiment of the Russian Federation, together with students from the Kremlin Riding School.

“I anticipate people asking why a modern army should need cavalry,” said Khlebnikov. “Of course, we’re not going to go to war on horses, but even now, the special forces work on horseback in difficult mountain conditions.”

Lt. Gen. Valery Khalilov, head of the military band service of the Armed Forces of the Russian Federation and chief military conductor, said that the horn band has an unusual approach—it plays one main note, but at the same time its repertoire includes classical works of music. Khalilov said that bands have no difficulty combining military discipline and creativity when performing military marches.

“Discipline is an essential concept for performing any music. The conductor in a military music band is a dictator. That’s the only way to get the right result. I have a conductor’s baton, but for such a large-scale event as the Spassky Tower festival I work in white gloves—just because the ranks at the back won’t be able to see a baton,” said Khalilov

Musicians from the Israel Police Band shared their impressions since arriving in the Russian capital.

“I served in the Soviet Army and at one time played on Palace Square in Leningrad, standing shoulder to shoulder with Valery Khalilov,” said Mikhail Gurevich, the band’s second conductor. “I’m very pleased that we’ve met again. Many of our musicians speak Russian well and grew up in this remarkable land: We’re pleased to be back here again.”

There was also talk about another important factor in the event—the weather. Sergei Khlebnikov expressed particular gratitude to the partners and guests of the festival:

“I take this as a sign of solidarity with Moscow, because people could have declined to come, blaming the difficult conditions. Guests of the festival simply need to dress warmly, and we’ve had our own thoughts about rain: There won’t be any.”

Incidentally, this year the Spassky Tower festival has a mascot, which makes an excellent souvenir. It’s a statuette of a grenadier drummer. It was designed by the artist Mikhail Shemyakin, who is planning to visit the festival himself:

“I’m the son of a soldier, and my mom fought in the war; I really love military music,” said Shemyakin.