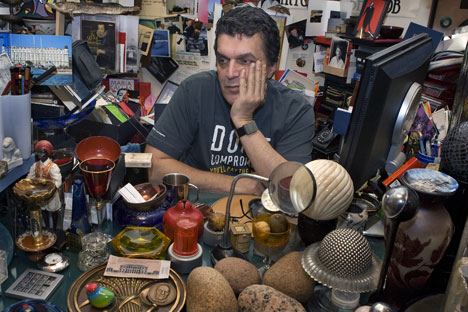 David Sarkisyan left his office last December, before Christmas, and never returned to his workplace again. On January 7, 2010, he died suddenly of lymphoma.

During the decade he spent in his office as director, the Museum of Architecture staged hundreds of exhibitions and became the center not just of Moscow’s architectural life but also its artistic life. David was neither a builder nor an architect – a biologist by training, it was as if he found himself in the life of architecture museum director.

He was like a squatter who had taken up residence in an abandoned building and invited his friends in.

Since no one was protecting Moscow architecture from destruction and fake substitutes, the public movement Archnadzor organized its exhibitions in the museum. The Moscow Architecture Preservation Society, or MAPS had its birthplace in the museum, petitions to the Moscow authorities were signed here, and journalists hurried here to hear the first reaction of cultured people to the latest initiative by unintelligent developers.

Meanwhile the museum’s yard filled up with sculptures that were brought here from the Donskoy Monastery, where at one time the museum had a depository and restoration workshops – there was nowhere else to take them. The museum also took in paintings removed from the Hotel Moskva, which was being demolished; elderly architects brought David their precious archives, and the formerly dull management office began to gradually fill up with brightly covered books, photos of country estates outside Moscow, travel souvenirs, multi-coloured stones, table-top sculptures, Chinese umbrellas and a metronome, becoming increasingly reminiscent of Wells’ Magic Shop. For the last few years there was only enough free space left in the office for three chairs – two for visitors and one for the director. David was a human omnivore, accepting young and old, respecting fame and loving those just starting in art, not dividing into high and low but trusting his own taste for talents, wherever they might come from.

The Office: Living Art or Sarcophagus

Thousands of friends and acquaintances came to say farewell to David Sarkisyan, which is highly unusual for the funeral of a museum director, and obituaries were published not just by Moscow newspapers and magazines but also by Western publications. While the Ministry of Culture was looking for a new director to fill the vacancy, David’s close friends thought about how to preserve the memory of the legendary director – and as it happened they didn’t have to go far to find their tribute. David’s office, wonderfully made into an artistic installation, is a memorial in itself. This obvious idea unexpectedly encountered opposition from the newly appointed director, an architect by profession, who thought he would free up the office by moving all David’s things into a glass sarcophagus in a suite in the main block of the museum.

A letter to protect the office, addressed to the Minister of Culture, was signed by dozens of distinguished Moscow museum curators, art historians and architects. The ministry supported the request that the office be preserved as a memorial. Archive experts are now at work in it, compiling a so-called collection inventory so that all the exhibits can be handed over to the museum for permanent preservation.

The installation in memory of the last director of the architecture museum in Moscow is currently being shown in Venice, in the ancient Palazzo Zenobio, which was decorated by Tiepolo. Since the second half of the nineteenth century it has been the home of the Armenian College, and in recent times artistic exhibitions have often been staged here. David loved this palazzo, with its luxurious garden, a rarity in Venice. In 2002 he was curator of the Russian pavilion in the Giardini for the Architecture Biennale.

Venice, with its unique aura—bewildering to any supporter of orthodox city-plans—is a lot like his office. Everyone knows the story about the first deputy mayor of Moscow, head of the capital’s construction complex, who, when he found himself in Venice for the first time, looked round the ramshackle little houses and declared that the city needed urgent repairs. One has to assume he meant Moscow-style, with demolition and consequent “restoration” in reinforced concrete.

An exhibition entitled “The Director’s Office” opened to the public together with the latest Architecture Biennale, the theme of which this year is “People meet each other in architecture”. Many of David’s friends from various cities around the world gathered at the opening in late August in the cool and spacious courtyard of the palazzo. The installation occupied two dark halls in the left wing of the building: in one there was a memorial film full of interviews with those who knew David well when he was alive.

Back in Moscow, his office has become a kind of lesson, or homework, left by Sarkisyan to Moscow’s architects and to the city’s authorities. It is something organic in the museum that belongs to living people, not to workshops, guilds, trade unions or ministries. The first duty of the architect is to preserve the “natural” beauty of the city, which often grows without his involvement, and only then to add his professional skill to what exists. David believed passionately that architects should be more like gardeners, otherwise our city will turn from a garden into a morgue.