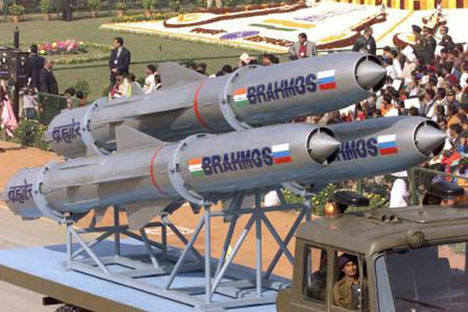 The missile was launched from the Integrated Test Range at Chandipur, off Orissa, on Sunday. After reaching a flat trajectory, it dived vertically at three times the speed of sound.

This was BrahMos' 23rd flight.

"It was an important mission. For the first time, a cruise missile was tested at a supersonic speed in a steep-dive mode," A. Sivathanu Pillai, CEO of BrahMos Aerospace Private Limited, said.

"When you launch a missile, it goes up and reaches a flat trajectory. In this case, the BrahMos dove straight down from its flat trajectory while cruising at a supersonic speed," he said.

BrahMos Aerospace Ltd. is a Russian-Indian joint venture manufacturing supersonic cruise missiles.
The BrahMos missile has a range of 290 km (180 miles) and can carry a conventional warhead of up to 300 kg (660 lbs). It can effectively engage targets from an altitude as low as 10 meters (30 feet) and has a top speed of Mach 2.8, which is about three times faster than the U.S.-made subsonic Tomahawk cruise missile.

Established in 1998, BrahMos Aerospace manufactures and markets BrahMos supersonic missiles. Sea- and ground-launched versions have been successfully tested and put into service with the Indian Army and Navy.