Kremlin Critics Get a Voice at "Russian Davos" 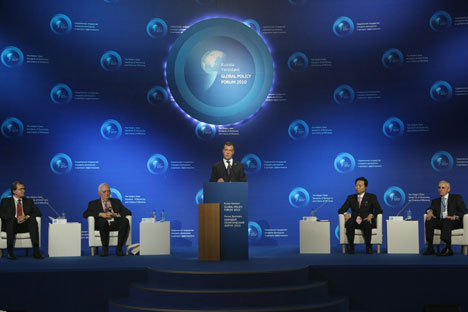 YAROSLAVL — In a rare show of openness, the Kremlin allowed outspoken Russian critics a voice at a state-sponsored two-day modernization conference that opened Thursday.

High-profile foreign guests and Kremlin advisers mixed with political leaders and businessmen at the event, dubbed the “Russian Davos” by George Robertson, a former NATO secretary-general and a board member at TNK-BP, who was in attendance.

Yabloko party leader Sergei Mitrokhin called on President Dmitry Medvedev to fight against the rule of Prime Minister Vladimir Putin. “Putin has started an oligarch’s revolution. Now it is time for Medvedev to accomplish an anti-oligarch revolution," Mitrokhin said.

Vyacheslav Surkov, the Kremlin's first deputy chief of staff, missed Mitrokhin's speech but arrived in time to hear Leonid Gozman, a leader of the Right Cause party, deriding Russian democracy as an "imitation.” Surkov, widely seen as the Kremlin's chief ideologist, smiled at Gozman's words.

Surkov later told reporters that Russia has its own democracy. “I don’t know if I am a democrat, but I am a free person,” he said.

Some forum attendees noted that political discussions were conducted in a much freer manner than during the inaugural conference in July 2009.

“It is an important forum for Medvedev to show his position and openness for discussion,” said Kirill Tanayev, general director of the Fund of Effective Policy, a government-leaning think tank.

Robertson said the forum allowed Russia "to show its positive role in the world and not to be afraid of constructive criticism."

"Russia enjoys a very large influence in Europe and the whole world and has a right to speak out and show itself," he said, Interfax reported.

In line with the show of goodwill, Medvedev adviser Igor Yurgens said Russia should aim to join NATO first as a political member and later as a military member.

He said the international fight against naval piracy gave Russia a good chance to improve ties with NATO and suggested that a joint public council be created to negotiate Russia's entry into the alliance.

But not everyone supported this position. Nikolai Bordyuzha, head of the Collective Security Treaty Organization, which is considered to be Moscow's response to NATO, said Russia should focus on issues closer to home, such as fighting terrorism in the North Caucasus and dealing with the conflict in Azerbaijan's breakaway region of Nagorno-Karabakh. But he acknowledged that Russia and NATO needed each other's help in dealing with issues such as the conflict in Afghanistan, drug trafficking and organized crime. “If we achieve that, we will find more issues for cooperation,” Bordyuzha said.

Yurgens said in an interview that Western guests at the forum did not express much concern about Russia's presidential election in 2012.

“They don’t really care who among the two will achieve presidency, because they know that neither of them is fervently anti-Western," Yurgens said, referring to Medvedev and Putin.

Medvedev will address the forum Friday and hold talks with South Korean President Lee Myung-bak about regional security on the Korean Peninsula and strengthening the strategic partnership between Russia and South Korea, Vesti state television reported.

The forum, titled “The Modern State: Standards of Democracy and Criteria of Efficiency,” was organized by two Kremlin-connected think tanks and Yaroslavl University in Yaroslavl, about 300 kilometers north of Moscow.