The real roots of terror 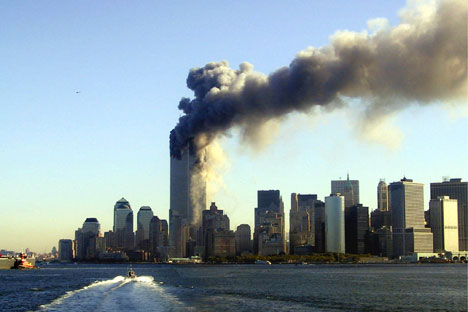 Nine years ago, on Sept. 11, 2001, we started living in “The Age of Terror.” This idea was accepted as the received wisdom. On Sept. 11, 2010, the concept of the 21st century as the “Century of Terror” will doubtless crop up thousands of times in the speeches of politicians, academics and journalists.

“There is an incalculable amount of work on the subject of terrorism, and it would seem this phenomenon has already been studied to the point of exhaustion, however there is still something sinister and enigmatic about it, something irrational which has not been fully understood,” wrote Russian orientalist Georgy Mirsky. It is hard not to agree with Mirsky’s words, but the fact that terrorism can be characterized as “sinister” and “enigmatic” is a result of incorrect—or inadequate—interpretations of the phenomenon.

Over the past nine years the numerous studies of the “Terrorist Threat” have generated many clichés and stereotypes, and these have supplanted a more pertinent understanding of terrorism; in the 21st century it is seen as part of politics. The time has come to revise the lexicon that political scientists use to describe terrorism. This will definitely not lead to a clarification of the terms and concepts and is not an exclusively academic undertaking. We need a more satisfactory study of “21st Century Terror” so as to put a full stop to politically correct prattle and to try to understand what this “global threat” actually is.

After 9/11, terrorism was accepted as the greatest threat facing the world. Terror, along with rogue states and the propagation of weapons of mass destruction began to be seen as the principle challenge to national and global security. But, if terror is the principle new threat of today, what caused the deaths of John-Paul Marat, the Russian Emperor Alexander II, the US Presidents Abraham Lincoln, James Garfield (who, like the Russian “Tsar- Emancipator,” was killed in 1881), William McKinley, John Kennedy, the Indian Prime Ministers Indira and Rajiv Gandhi, and the Italian politician Aldo Moro? In 1892 there were around 1,000 murders organized in Europe and about 500 in America. So the idea of terrorism as a novel phenomenon is fundamentally flawed.

Those who see the terrorist threat as a recent development argue that in the 21st century, terrorism is happening on a much greater scale than in previous centuries. However, even before 9/11, the scale of terrorist activity was impressive. In the Russian Empire from 1901 to1911 about 17,000 people were killed by terrorists (half of them worked for the state). From 1970-1980 the Japanese “Red Army” numbered about 30,000, the Italian “Red Brigade” was up to 70,000 strong, and the Irish Republican Army numbered 400,000 people. By the 1990s, there were about 500,000 active terrorist groups in the world.

What is global terrorism?

Proponents of the idea that post-9/11 terrorism is different than what came before also argue that this modern terrorism is global (or worldwide or international). But this distinction is still somewhat misleading. In 1990, citizens of 73 countries were the victims of terrorist attacks; in 1995, terrorist victims hailed from 51 countries. International networks were in existence in the 1990s, and terrorists were working in cooperation with both other terrorists and with “state sponsors of terrorism. In Iran, Ayatollah Khomeini generously remunerated terrorist activity in Libya and Algeria. Libyan leader Muammar Gadhafi shared the common enemy of “British Imperialism” with the IRA and collaborated with them despite his devotion to the ideals of Islamic socialism. So if we understand “global terrorism” as international contacts between terrorists of different countries, it existed long before 2001.

And what does “global terrorism” actually mean? What is a worldwide terrorist network and to what extent are terrorists from different corners of the world interested in cooperating with each other? While collaboration between terrorist groups of different traditions is possible, it is hard to imagine terrorists representing radical Hinduism collaborating with Muslims who organized the attack on Mumbai in Summer 2006. It is unlikely Hezbollah would work in conjunction with radical Israeli organizations; and it would be impossible for the Turkish terrorists from the Grey Wolves organization to unite with terrorists from the Workers’ Party of Kurdistan. Is there anything that unites terrorists from religious and ethno-nationalistic groups with terrorists who are struggling for a social revolution, for whom ethnicity and religious conflicts are only distractions from the real issue of the class war? It seems that, apart from a penchant for explosives, terrorists from different factions do not have anything in common.

The term “global terrorism,” which contributes nothing to our understanding of terror, is a coinage born of the dogma of political correctness. It is this dependence on the new ideological and political totalitarianism, taken to its extreme in political correctness, which forces even serious academics to speak of terrorism outside the context of national or religious allegiance, although these allegiances most often provide the roots of terrorist activities. Take, for example, the “Armenian avenger,” Solomon Teilirian, who annihilated Talat Pasha for his part in the Armenian genocide in the Ottoman Empire; he considered his act of terrorism a justified act of revenge on behalf of the Armenian people. For him terrorism was wholly national. And terrorism was just as national for the soldiers of the Internal Macedonian Revolutionary Organisation (IMRO), the IRA and the Basque ETA.

Terrorism has roots in religion as well as ethnicity. As Andrei Kuraev pointed out, “perhaps terrorism is a result of a distorted interpretation of the Koran. But this is the Koran we’re talking about, and not just Winnie-the-Pooh books. And the most erudite Muslim men stand by the sources of this distortion.” But religious terrorism is not necessarily limited to Islam. Shoko Asahara, the head of the totalitarian sect Aum Shinrikyo, had nothing to do with Islam, and David Koresh’s Branch Davidians had their roots in Christianity. What is clear is that, depending on the circumstances, terrorism as a historical phenomenon will always be tainted by ethnic or religious concerns. In reaction to a definite stimulus, terrorism cannot be without national, ethnic or religious motivation.

Who is a terrorist?

What constitutes a terrorist is also important for any understanding of terrorism. Who can we call a terrorist? Often terrorists achieve heroic status. Vera Zasulich, Carl Zand and Solomon Teilirian were considered role models in their time, whereas now they are akin to Osama Bin Laden or Shamil Basayev. Is it possible to define words such as terrorist, revolutionary and rebel? Many discussions of terrorism include deliberately juxtaposed dichotomies (terrorist – freedom fighter, terrorist – defender of an oppressed people). In one case we talk about the methods of the struggle (terrorism) and in another we mention the ethical basis (a champion of the people or a mastermind of “great crimes”). But the logic of the comparison is flawed. In reality, the words revolutionary, freedom fighter, dangerous criminal, and terrorist refer to one and the same thing. If a defender of the rights of a minority ethnic group uses explosives, a gun or a guided missile, he is a terrorist. According to Georgy Mirsky, it is the political motivation of terrorists that “allows us to separate them from mafia shoot-outs and gang warfare, even if their fighting methods are no different from political actions.”

Then how is 21st century terrorism” different? Terrorism itself is undoubtedly nothing new, and modern terrorism grew from historical roots. We cannot view today’s terrorism as a “clash of civilizations.” In the fight against radical Islam, Protestant America, Jewish Israel and much of the Muslim Middle Easter are on the same side. In the secular states of the Islamic East (Jordan, Azerbaijan and Egypt) the fight against Islamic extremism is being carried out much more rigorously than in democratic countries of the EU. The latest war on terror is a war of the postmodern age, a war where there is no good and no evil and no definite or fixed system of values. Those who fight terrorism today are neither sure of the values they are defending nor of the moral inferiority of their opponents. Nevertheless it is possible to roughly interpret 21st century terrorism as a war against the modern state and against modernization itself, which is sometimes, somewhat erroneously, associated with globalization

According to David von Drehle, we are experiencing a “series of wars without frontiers, armies or rules, happening on a vast scale and lasting a long time.” What has challenged the United States, Israel, Russia and the countries of the EU is a network of terrorist organizations that spans many different countries and regions across the world, organizations that, on their own, pose absolutely no threat to the leading countries in terms of military or economic prowess. But countries with super-efficient military structures and powerful governmental institutions are not in a position to prevail over a terrorist network unaffected by significant political confines, and the problem will not be solved until governments realize the extent of the danger posed by terrorist networks that threaten not just individual countries, but the entire state system by which we live. The most important task of today is to determine what is really important for the global community, to return to a definite set of values. And to do this, we must first overcome the intellectual legacy of postmodernism with its philosophy of moral permissiveness. If today’s political challenge stems from Islamic extremism, authoritarian sects or nationalist groups, then we ought to talk about this openly, without dwelling on our own political culpability. A neat definition, a moral evaluation and an understanding of the motivation and character of the current war on terror and its varied manifestations could make the 21st century a much less dangerous place.

Sergei Markedonov is a Visiting Fellow at the Russia and Eurasia program of the Center for Strategic and International Studies (CSIS) in Washington, DC.