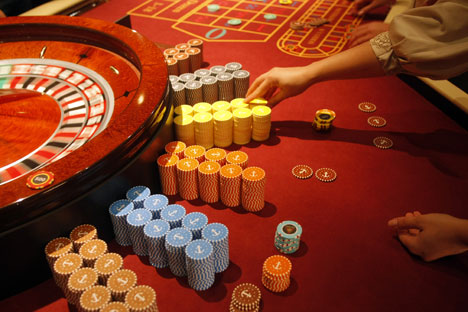 Russians have become used to the fact that there is no longer a profusion of gambling parlors and casinos on the streets, nor slot machines in supermarkets. More than a year after it became illegal to run gambling establishments in most of Russia, some firms have gone deep underground while others have started calling themselves lottery clubs.

Legally, games of chance are allowed in four designated gambling zones. One of these is Azov City, where two casinos, the Orakul and the Shambala, are already in operation. But at the same time, industry leaders are pinning their hopes on the chance that law will be repealed, or at least modified. The Russian Association for the Development of the Gambling Business (RARIB) has come forward with an initiative to relocate gambling zones closer to the big cities, while the Russian Union of Industrialists and Entrepreneurs (RSPP) is advocating for casinos in five-star hotels.

One of the first important voices for a change in the licensing of gambling zones was Alexander Tkachev, governor of the Krasnodar region. According to reports in the business daily Vedomosti, a few weeks ago Tkachev sent a letter to Russian President Dmitry Medvedev asking that the Azov City gambling zone be relocated to Anapa from its current position on the border between the Krasnodar and Rostov regions. He argued that both gamblers and investors were being put off by the remoteness of the zone. Regional businessmen supported the governor’s initiative. Dmitry Slobodkin, the vice-chairman of the RSPP Commission for Hospitality and Entertainment Industries and Tourism, said that if the gambling business in the country is to operate legally, then the gambling zones must be relocated as close to Russia’s biggest cities as possible.

Those who support the reintroduction of gambling establishments use the following arguments: Gambling zones in the middle of nowhere are unattractive to investors as so much capital outlay would be required to construct a communal infrastructure, roads, airports and hotels. The distance from the big cities reduces the number of potential customers significantly since there are not many who are willing to spend money on the journey as well as the gambling itself. The problem would be solved if the zones were closer to the 13 Russian cities with a population of over a million.

In accordance with a federal law passed Dec 29, 2006, all gambling in Russia was to be restricted to the four gambling zones as of July 1, 2009. However, more than a year later, all these zones are not yet up and running. Only Azov City has casinos that are operational. In Siberskaya Moneta and Primorye, investors have been chosen but construction has not begun. In Kaliningrad, tenders have not even been held for development rights.

Gambling industry executives were meant to fund the construction of these “new Las Vegases” themselves, and they weren’t short of money. According to estimates from PricewaterhouseCoopers, the turnover of Russian gambling operations in 2008 reached $3.6 billion dollars, excluding the profit of the bookmakers. Bookmakers’ profits reached $1.7 – 1.9 billion in the same year, according to data from the National Bookmakers’ Association. However, since July 1, 2009, the gambling zones have not made any money. RARIB council chairman Valery Ivanov says this is for one simple reason: Entrepreneurs from the business did not want to risk investing money in the development of the gambling zones.

Businessmen suggest that the payback period for investment in gambling zones will be hard to calculate. According to Dmitry Slobodnik, if regional calculations given to the Ministry of Finances are a guide, the most optimistic estimate of the recoup on investment in the gambling zone could be 30-35 years, although the usual payback period for gambling industry investments is five to seven years. Investors complain of all-pervading corruption, unstable legislation and the absence of various advantages. Tradition also plays an important role. “There will not be any investment into the Altai gambling zone, because, until 2009, there were only 200 slot-machines in the whole region, and not a single casino,” explained Dmitry Slobodkin.

Businessmen think the gambling industry could be saved if the gambling zones were located more prudently. For example, they endorse the idea of moving Azov City near Anapa. Although the city usually has a fairly small population, the holiday period there are about 4.5 million vacationers who are willing to spend money. Businessmen are prepared to make this move even considering the loss of their investment in the first gambling zone, and the fact they will have to invest more money in another new infrastructure.

More promising, perhaps, is the proposal to put casinos in five-star hotels irrespective of location. These hotels are already situated in the center of Russia’s biggest cities, there is already an infrastructure in place, and the number of potential customers is huge. Valery Ivanov sees benefits in this idea for the state as well as the gambling business. “In this location it will be easier for law-enforcement agencies to keep control over gambling establishments and it will be much simpler to administer taxation,” Ivanov said.

Of course, if the businessmen’s plans are approved, the question will again surface as to why the law moving the casinos out was ever passed at all. Ostensibly, the law was conceived to rid cities of gambling addicts. According to the American Association for Problems of the Gambling Business, 14 percent of Russians have tried their luck on a gambling machine at least once. A tenth of this number fall into the category of pathological gambling addicts. According to rough estimates, they spend 40 percent of their income at gambling establishments. It is thought that in towns with a well-developed gambling infrastructure, up to 1.5 percent of the population suffer from gambling addiction, however the true number of gambling addicts in Russia remains unknown.