Race for the Arctic, and for FDI (+infographics) 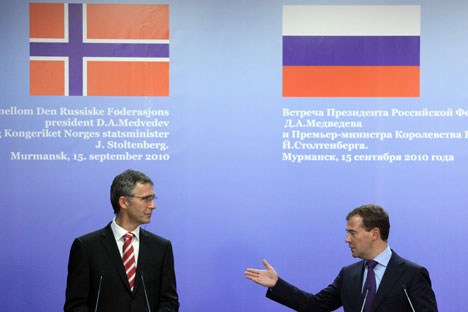 On Sept. 15, Russia and Norway signed an agreement to end a 40-year-long dispute over sovereignty of a 175,000 sq km block that straddles the Barents Sea and the Arctic Ocean.

The agreement was signed in Murmansk in a ceremony attended by both Russian President Dmitry Medvedev and Norwegian Prime Minister Jens Stoltenberg. The details of the deal are not yet fully clear, but media reports suggest that each country will get roughly half of the territory.

The disputed territory of around 175,000 square kilometers will be divided into two equal parts

Improving Russia's image and investment credentials
On a geopolitical level, this deal is yet another example of Russia resolving long-standing disputes as it pursues a new and softer foreign policy. The draft of the country's proposed new foreign policy approach was leaked to Newsweek earlier this year. In the document, the government's proposal is that Russia should no longer have enemies or friends, but only interests. Moscow is of course very keen to project this new softer and pragmatic approach as it looks to improve Russia's image and investment credentials internationally. The government needs to attract a significantly larger volume of foreign direct investment (FDI) into the economy, especially into industries that will represent economic diversification, such as technology and manufacturing. FDI, especially outside of extractive industries, has been running at far too low a level both relative to the FDI in other major developing economies and relative to what the country needs to create a more diverse economic base. Previous disputes with neighbors, such as the gas disruptions across Ukraine and the war with Georgia, have been cited as reasons why strategic investors have remained wary of Russia risk along with corruption, uncooperative bureaucrats and poor legal enforcement.

Earlier this year, Russia finally improved relations with Poland, albeit following the tragedy at Smolensk. Relations with the EU and the United States are also much improved over the past two years. Now that there is also a better relationship with the Ukrainian government, the threat of further disputes over energy has been greatly reduced. The two major outstanding issues on the geopolitical stage involve Georgia and the dispute with Japan over the Kuril Islands. Georgia recently said that it would block Russia's entry into the WTO but given that momentum has again picked up for Russia to join the global trade group, the dispute with Georgia may also be at least eased over the next year, most likely with pressure for a softer line coming from Brussels and Washington. The Kuril Islands dispute seems likely to remain a total impasse but, equally, is unlikely to cause any major issues.

Energy factor
The other reason for the new agreement with Norway is energy. Most people believe that the Arctic region is the next, if not final, energy frontier and, below the seabed lies untold energy and mineral riches. How much is there? The short answer is that nobody knows, but that of course does not stop lots of speculation about recoverable resources and that, in turn, has led to both this agreement and Moscow's further attempt to persuade the UN to recognize its sovereignty over a much greater section of the Arctic based on the Lomonosov Ridge. Norway is now more likely to support Moscow's claim at the UN.

Russia estimates that the recoverable resources in the block that is to be carved up may equal the equivalent of 39 billion barrels of oil or 6.6 trillion cubic meters of gas or a combination of both. Others say it is less, while some speculate it is greater, but proper exploration work was not possible until the agreement was reached. Now it is expected that Norway and Russia will cooperate, possibly in the form of a joint venture between StatoilHydro and Gazprom, on an exploration program to answer the question of available resources. The results of that exploration will also be very important for what happens elsewhere in the Arctic region. Disappointing results will cool enthusiasm for exploration in the Arctic and give the environmentalist lobby a breathing space; results that confirm the existence of a large volume of energy riches will trigger an energy race.