Do they even play cricket in Russia? (+multimedia) 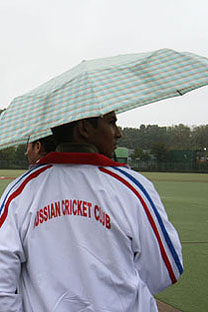 All photos by Anisia.

Imagine a Russian team playing in T20 cricket match? Well, it sounds exotic, but if the soaring enthusiasm of a small band of cricket enthusiasts is anything to go by, the game which remains exotic for a majority of Russians is headed for better times in a country where most people can’t distinguish between cricket and crocket.

A few months later, Russia’s cricket team took part in the European Twenty20 cricket tournament, where it made it to the finals before losing to Hungary. It should comes as a pleasant surprise to cricket-crazy Indians that Russia, too, has a national cricket team!

Cricket in Russia goes back to 1995, when a group of Indian students began to organize friendly matches using tennis balls and bats. Chopra, who came to Moscow in 1989 to study at State Technical University, and later went to Moscow Aviation Institute, came up with the idea to get the group together. “I was considered to be a good player in India, and I kept thinking about cricket when I came to Russia. It is like my first love, as essential as air,” Chopra told Russia & India Report (RIR).

This passion bore fruit in 2000, when the United Cricket League of Russia was founded. It initially had just four teams: India, Australia, Britain and the world team for players from other countries. Fast-forward to the present, and you have eight teams in the league, with the strongest one, Friends 11, a seven-time league champion.

Along with the regular season, now there are also Twenty20 tournaments, a shorter, glamorous TV-friendly version of the sport, which was introduced in 2003 to attract more fans. The Russian team began to participate in Euro Twenty20 competitions two years ago. Their first appearance did not go as planned, but a year later the Russians fared handsomely by taking silver.

“We are seeing progress. I hope that we will be recognised by the International Cricket Council before the end of the year, which by then will put Russian cricket on the map,” said an upbeat Chopra. “We have recently teamed up with the Russian Baseball Federation. They are helping us a lot, and we are very grateful for that,” he added.

Unfortunately, Team Russia does not have the money to participate in the Cricket World Cup, but as soon as it gets the financing, the team will take part in qualifying matches.

Almost all of the Russian team’s players are those from India and Pakistan. “We all play under the Russian flag. If we have to play against India or Pakistan, we will not see this as if we are playing against ourselves," he said. " We already have four Russian players, and our hope is that this number will climb.
Chopra speaks like a cricket evangelist whose mission is to popularize the game in his adopted country.
“Our main goal is to involve more local players on the team at the expense of foreigners. We also want children to start practicing cricket. It has a bright future in Russia and is becoming a fashionable and glamorous sport,” said the man who regards cricket as a sort of religion.

Iconic cricketer Ajay Jadeja, former skipper of the Indian team, had a tryst with Russian cricket recently. Jadeja was invited by the United Cricket League of Russia to watch the final match of the annual summer cricket championship last month. “I found out for the first time ever about cricket in Russia in June from one of my friends. My reaction was: “Do they even play cricket in Russia?” Well, now I am here and the players play with a lot of passion,” Jadeja said.

It was a voyage of discovery. "It is a different world. Unless you have been here, you are not able to understand what the place is like,” said Jadeja, who spent a week in Moscow and St. Petersburg. He was struck by camaraderie between Indians and Pakistanis on the cricket field. “Indians and Pakistanis play together and spend weekends hanging out. This is how they keep in touch with their homeland. It is wonderful to see how, of the roughly 3,000-4,000 Indians living in Moscow, 200-300 of them are out playing cricket. Cricket brings them together.”