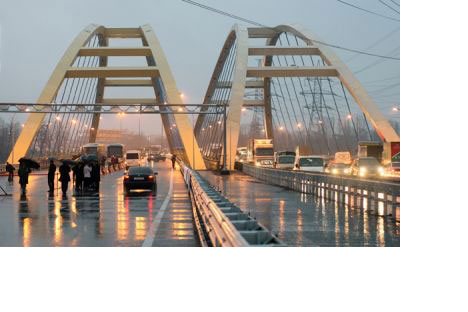 Renowned for their long lines of passengers and kilometer-long queues of trucks, Russian border crossings may soon shed some of their poor reputation, as a new bill grants private transportation companies the right to equip and maintain the country’s border checkpoints. As part of wide-ranging reforms meant to liberalize border crossings and boost efficiency, the Federal Agency for the State Border Development (Rosgranitsa) has also announced plans to introduce an automated system for border control at some of the country's major transportation hubs.

A new bill “On State Border Crossings” proposed by the agency will accelerate a complete overhaul of all of the country’s domestic border checkpoints and give them a European appearance, Yuri Borodin, the deputy head of Russia’s Federal Agency for State Border Development told Russia Profile. The new bill will also regulate the relationship between the government and private owners of buildings and facilities at ports and airports, he said.

Rosgranitsa plans to kick off next year by introducing an automated system for border control, which the agency says would be a sea change in the way the country's border checkpoints operate. The new system, which includes biometric screening, will enable visitors going in and out of Russia to go independently through all immigration procedures – including filling out migration cards – with the help of electronic terminals. Rosgranitsa intends to equip 25 airport checkpoints, out of the existing 80, with the new technologies by 2017, Vladimir Goncharov, the deputy head at Rosgranitsa, told state-owned Rossiiskaya Gazeta on Tuesday.The federal agency, which regulates the quality and volume of traffic through the border checkpoints across the country, also exercises decisive influence over such key economic areas as foreign trade and tourism. It is also a quasi-security structure that works closely with the Federal Security Service (FSB). In addition to controlling the traffic of people and goods, Russian border checkpoints are at the forefront in the nation’s battle against terrorism, drug and human trafficking, smuggling and illegal migration.

But the difficult balancing act Rosgranitsa faces is how to make the border open and secure at the same time, experts say. Russia currently operates more than 400 border checkpoints, dozens more than the United States, which has 327 checkpoints. However, the majority of these are equipped with obsolete infrastructure and “a few do not meet up-to-date international equipment requirements,” the Head of Rosgranitsa Dmitry Bezdelov told European Union colleagues early this year. “This is why Rosgranitsa puts such emphasis on the international practices of border checkpoints development,” Bezdelov said.

The need to introduce cost effective and labor-saving technology, already existent in many industrialized countries, appeared to be putting added pressure on the agency. “In addition to fast-track procedures for monitoring passengers, the new technology will lead to a significant reduction in the numbers of checkpoints,” Rossiiskaya Gazeta quoted Goncharov as saying. “This will be especially evident at sea and river ports, where the seasonal work lasts only four months in a year while the number of port employees remains the same throughout the year.”

Another new challenge, Goncharov said, is how to leverage an automated border control system to reduce the huge workload at the country’s border checkpoints. Introducing a biometric screening system, he said, would facilitate the border checks, reduce the queues, and release the staff earlier engaged in screening the people crossing the border and their papers. He said that while border guards and immigration officials presently spend a few minutes checking a passenger, the new biometric control system is expected to do the job in ten to 15 seconds.

Using the technology also means that the passenger does not have to meet face to face with the border guard. However, CCTV cameras operated from staffed control rooms will keep starry eyes on potential violators, including making sure that divorcees blacklisted for failing to pay upkeep allowances to their ex-wives do not cross the borders. Rosgranitsa recently completed a pilot test of the system at Moscow’s Vnukovo airport. The test, however, revealed a significant loophole: the technology cannot yet stamp the passports of people crossing the border. The agency said this revelation is making it consider abandoning putting stamps in passports altogether.

In addition to modernizing infrastructure, the new bill will empower the agency to reconstruct and improve privately owned cross-border checkpoints. “The bill provides a mechanism requiring owners to provide suitable accommodation for the organization of border and other controls at ports and airports,” Borodin said. “The state is obliged to bear the costs of maintaining such facilities. Additional costs for special equipment and equipping of such facilities will also be borne by the state.” In most EU countries management companies of airports and sea ports provide facilities for border control in similar conditions, he said. However, unlike in EU countries, ports and airports in Russia will be required to enter into agreements with the state overseer, Rosgranitsa, which will create the necessary conditions for the operation of private bodies, as well as the functioning of the check points. As part of the reforms, road checkpoints will remain under the control of the federal government.

The proposed bill will also curb illegal practices at a number of checkpoints, which sprang up in the chaotic early 1990s. In the chaos that followed the collapse of the Soviet Union, many entrepreneurs took hold of checkpoints in efforts to subject border guards to the whims of business interests. There were reported instances of businessmen letting out office spaces to border guards – sometimes free of charge – to encourage them to look the other way. “If the bill is passed, it will make it impossible for business enterprises of any hue to be directly involved with the activities of border authorities, Borodin said. “In addition, the bill will have specific provisions prohibiting any interference in the activities of border and other supervisory bodies at seaports and airports by the private owners of the premises. In this regard, the implementation of the bill would not entail any additional risk in matters of national security.”

Regardless of the new bill, measures have been introduced under the existing legislation that will guarantee non-interference of private property owners in the affairs of citizens crossing state borders at about ten checkpoints that still remain under the control of private entities, Borodin said. Border crossings acquired by individual businessmen in the early 1990s, he said, are gradually being placed under the control of the agency. Rosgranitsa has also taken the unusual step of compensating business entities for utility payments made for the premises occupied by employees of state control bodies at the checkpoints.

Every year, over 30 million people cross the Russian borders both ways, with the government raking in $500 billion in 2009 alone, figures from the agency show. Modernizing services at the border points is expected to bring in even more, while the need for visa-free movement has added urgency to the pace of reforms that would elevate Russian checkpoints to European standards. “In our work we are striving for the same [goals] as they are in the West,” Bezdelov said. “We have found out that we have one and the same purpose – that is linking security and thorough checks with ensuring people’s rights and liberties. Comfortable border crossing remains a priority issue, despite the significant strengthening of control following terrorist attacks.”