Moscow, I Love You

The Voice of Russia
RBTH 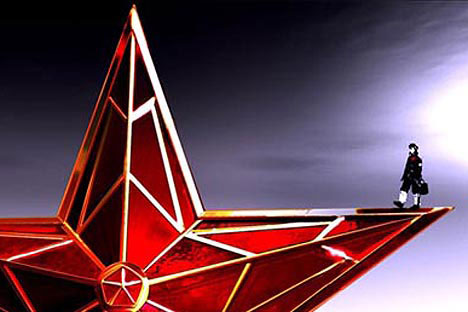 The film consists of 18 short films made by different Russian directors who tried to capture the Moscow of our days. In fact the film is a Russian alternative to a popular French movie "Paris, I love you" and a similar film about New York but according to the project's producer Yegor Konchalovsky this won't make it less interesting. Konchalovsky was offered to take part in the French project and that pushed him to make an alternative project about Moscow.

"In Paris they invited me to participate in the French and later their producer even went to Moscow to discuss it with me. This pushed me to the idea - why not to make a similar project about Moscow, our beautiful capital? The only disadvantage I saw is that Moscow was not such an influential city as Paris was for many great filmmakers," he said.

Well, it is likely that Polish filmmaker Kshishtof Zanussi who declared his love to Moscow many times would argue this statement as well as French director Claude Lelouch. It was in Moscow where he realized that he wanted to be a film director.

Anyway the new Russian film is worth seeing. It includes funny, romantic and touchy stories with love, betrayal, gangsters, hopes and disappointments.

According to Yegor Konchalovsky the most difficult thing was to select stories. "I thought my hair would turn grey on this project!" he says. "It was so difficult to unite so different stories made by different directors in one film".

One of the stories was filmed by Artyom Mikhalkov, the son of the world famous Russian filmmaker Nikita Mikhalkov. His story called "Job" is about a Russian guy who is trying to get a job in a US company. We hear from Artyom Mikhalkov:

"The spirit of Moscow is in this story. Modern Moscow is a megacity with the offices of many foreign companies which set their rules and surround us with brands."

Signs of the time - it cannot be denied. In 1963 Artyom's father Nikita Mikhalkov played his first role in the film "I walk through Moscow".

That film captured a different city - a little bit naïve, unpretentious but more sincere and friendly. That film has become the classics of the Soviet cinematograph. Time will tell what fate of "Moscow, I Love You" will be.