A post-perestroika catharsis, set to music 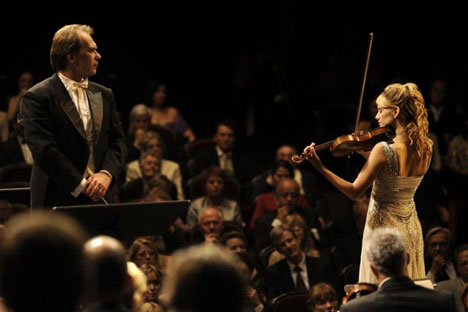 With its comedic take on post-perestroika Russia, the French movie “The Concert” offers a cathartic experience to Russians who lived through that time while giving non-Russian audiences a window into the complex era.

The film captures the sense of adventure and endless possibility that permeated the early 1990s, and sets it all to the music of Tchaikovsky. Although a work of fiction, the movie is based on two real events: the two-year ban of Bolshoi conductor Evgeny Fedorovich Svetlanov after his refusal to honor Soviet premier Leonid Brezhnev's request to rid the orchestra of Jewish musicians, and a performance in Shanghai in the early 1990s by a group of musicians masquerading as the Bolshoi orchestra.

In “The Concert,” Andrei Filipov (Alexei Guskov) is forced to work as a janitor after conducting an orchestra at the Bolshoi Theater that included Jewish performers. One day, he intercepts a fax inviting the Bolshoi Theater Orchestra to play at the Châtelet Theater in Paris. Filipov’s decision to seize the opportunity sends him and his old friends on a journey from Moscow to Paris where they eventually impersonate the Bolshoi orchestra and perform with famous violinist Anne-Marie Jacquet (Melanie Laurent).

To capture the spirit of the time—the Soviet bureaucracy, the melancholy that came with stagnation, and the reaction of formerly repressed people who don’t know how to handle freedom—French-Israeli director Radu Mihaileanu cast mostly unknown Russian actors. Aleksei Guskov, who stars as conductor Andrei Filipov, found his role particularly challenging: He knew nothing about conducting an orchestra and spoke no French whatsoever. Guskov said he mastered the French he needed with the help of the international movie crew and cast. He also praised conductors Igor Dronov and Alexander Grande for helping him find his character.