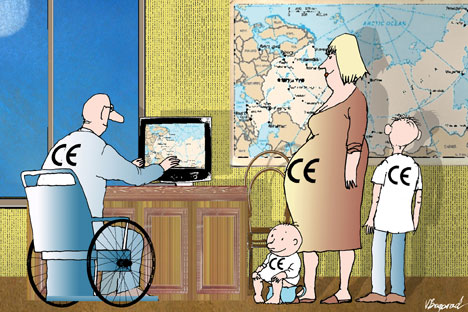 Some Russia observers never tire of repeating that Russia faces a “demographic crisis.” Recently, the Russian Service of the BBC warned ominously that “Russia is rapidly dying.” The author concluded that Russia’s falling population will significantly weaken its international position and, possibly, alter its borders.

With the U.S. Census Bureau estimating that the world’s population will hit between 8.5 and 10 billion by mid-century as natural resources diminish, I would suggest that countries with less, not more, mouths to feed, oil to consume and fresh water to drink will be in the stronger and healthier position.

Russia certainly has an abundance of natural resources: a sprawling territory, fresh water, including 20 percent of the world’s supply in Lake Baikal alone, endless forest, a booming agriculture business, oil and gas, an educated population and the nukes to defend itself.

Led by President Dmitry Medvedev, the state has pushed through measures designed to reverse startling demographic trends. Stricter traffic laws are designed to reduce highway mortality figures; the state has taken on the problem of alcohol abuse and increased its investment in health care. Last year, Russia’s population actually increased, a trend some academics paradoxically continue to ignore. And male life expectancy has risen by almost two years since 2005, according to Russia’s State Statistics Agency.

Despite these gains, the shrinking workforce and falling demand could impede economic growth in the coming decades. And more recent government initiatives, which seem to have succumbed to some of the hysteria surrounding the country’s dwindling population numbers, give cause for concern. Since 2007, the state has also been awarding vouchers worth approximately $12,000 to mothers who have more than one child.

I would suggest, however, that in addition to paying citizens to have more children, the government should focus on improving the productivity of Russia’s working population. This figure remains critically low: according to Capital Partners, the average Russian worker is only 16 percent as productive as his EU counterpart.

A few modest proposals the government should pursue - which would develop Russia’s economy, standard of living and global clout considerably more than additional babies - include:

- Reach out to the Diaspora abroad: Russians abroad have the critical skills, practical experience and enthusiasm in management that Russia desperately needs. But they can literally be snatched off the street and hauled off into the army. This leaves them with the choice of giving up Russian citizenship or avoiding the country altogether. The state should amend legislation on conscription and residency to attract skilled dual citizens. Anyone who doubts the significance of this untapped resource need look no further than the role China’s “sea turtles,” or repatriated Chinese, and the role they played in that country’s remarkable modernization over the last 30 years.

- Developing foster care so more of Russia’s 730,000 orphans are able to become healthy, productive members of society in their adult lives. Research shows that most fall into drugs, violence and suicide. Apart from the obvious humanitarian need to address this tragedy, better family planning and domestic adoption policies could allow them to become citizens with full lives.

- Educate and integrate the disabled into society: The “innovation” economy touted by Medvedev isn’t based on factories and combines. Making all of Russia’s cities fully accessible may, of necessity, be a medium-term goal, but there is no reason new centers of innovations and transport networks do not include accommodations for the disabled when built. Moreover, many jobs in R&D, IT and hi-tech startups can be done from home via the Internet; guaranteeing a free high-speed Internet connection for the physically disabled in major Russian cities, and providing them with vouchers for online college courses, can be done now.

Medvedev’s modernization drive is the best opportunity to finally switch the discussion of Russia’s demographics from quantity to quality.