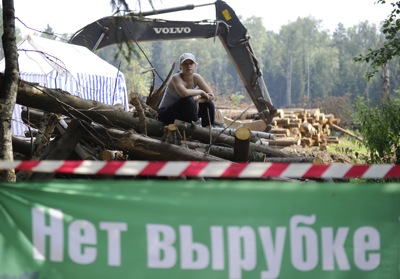 A protester sits behind a barricade that reads “No todeforestation” at the site of Khimki highway constructionSource: ITAR-TASS

In August, the country was on fire. In September, the president stopped a highway project in favor of a forest’s rebirth.

Flying into Moscow’s Sheremetyevo Airport, just south of the city before landing, one can see a large swath of green appear, a verdant oasis from urban blight. But cutting through the lush trees is a thin short scar, a two-mile-long logging path, which has been the subject of huge controversy on the ground. Today, seedlings are already replacing downed trees and the scar will soon be that much smaller.
What now looks like the end of the Khimki forest logging project and the beginning of the forest’s re-growth is the result of a powerful and unprecedented nexus of President Dmitry Medvedev, a country burning and an environmental campaign that has captured the support of everyone from the Russian public to international rock emissary Bono.

Work on the new Moscow-St. Petersburg highway, which was set to trundle through the forest, was halted by Medvedev, a stunning U-turn by the authorities after the largest demonstration in years in support of Khimki’s trees. Hardly anyone expected Medvedev to intervene, and the move has given renewed hope to some that the government can have a constructive dialogue with members of civil society—including opposition activists and environmentalists.

“It is clear that the protests about Khimki forest produced the decision,” Mikhail Kreyndlin, head of Greenpeace Russia, said.

The road, years in development, was slated to travel straight from St. Petersburg to Moscow, except at the end where it cut a dog leg past Sheremetyevo airport then into and out of the forest. But Khimki is perceived to be the precious heart of the green belt in Moscow, and more recently the lungs to one of the most polluted cities in Europe.

The green belt is made up of mainly pine and fir trees, but also contains one of Europe’s few remaining oak forests. After a summer in which forest and peat fires engulfed the country, the forest’s importance has been heightened for many.

“I think that [Medvedev] reacted to the people,” Yevgeniya Chirikova, the head of the campaign to save Khimki forest, said.

Veteran rocker Yuri Shevchuk performed at the protest on Aug. 22, when thousands gathered in the center of Moscow. Most worrisome for the government was the fact that the crowd was composed of mostly ordinary people, not simply the usual suspects of hard-core opposition activists.

Three days later, the singer was unexpectedly invited onstage at U2’s first-ever Moscow concert to sing “Knockin’ on Heaven’s Door” with Bono. Bono had met Medvedev the day before, and the invitation was taken as a deliberate gesture of support for the Khimki campaign from Bono.

Some in Moscow joked that the campaign actually managed to knock on heaven’s door.

However, experts warn that the sums involved in the road building mean that victory for environmentalists is far from guaranteed.

”One of the possibilities is that protests will quiet down for a month or two, then some discussions and then they will start with the original plan again,” Nikolai Petrov, a political analyst at Moscow’s Carnegie Center, said.

Other cases that pitted environmentalists against development projects have had initial success—such as the closing down in 2008 of a pulp paper factory that was polluting Lake Baikal, which reopened this year. The destruction of homes illegally built in the dacha settlement of Rechnik was halted after protests earlier this year, but local courts have just given permission for the demolition to resume.

”Maybe I am mistaken, but there is a fear that [stopping the highway] was done to ease tensions and then they will continue the construction,” Kreyndlin said.

There have already been signs that supporters of the road will fight dirty. The Khimki administration launched a petition in favor of the road. Workers at shops and institutes connected to the administration were ordered to sign and collect signatures, according to Yevgeniya Chirikova, the head of the campaign to save the forest. Within three days, 20,000 signatures were collected supporting the road through the forest, an impossible tally without serious pressure from the local government.

An emerging problem is where to build the road now. “Going though Khimki is bad; there will be ecological damage,” Mikhail Blinkin, an independent transport expert, said. But other routes will require huge compensation payments to displace residents, and a major planning effort, Blinkin said. “There is no decision that everyone is going to like.