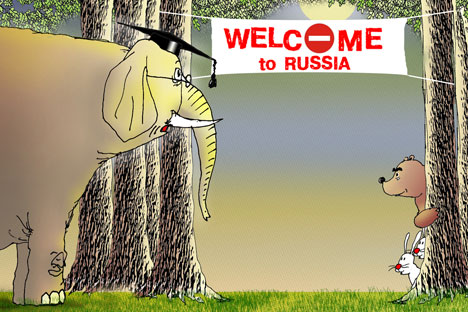 A few years ago our institution made a huge breakthrough: For the first time we hired a foreigner as a tenure-track professor. This was a really big deal since foreign-educated academics are extremely rare at Russian universities. For us in particular, it was a welcome sign that we are competitive enough on the global market for researchers. Having sealed the deal, however, we had one small problem to solve.

How could we bring our new colleague into the country?

This was a huge problem. Unlike most countries, Russia does not have a special category of “academic” visas to be issued to foreign researchers and professors. Until recently, there was a single, all-embracing category of visas for all those planning to work. As a result, highly skilled professionals frequently had to stay in Russia on short-term visas, and were forced to travel to a neighboring country at the end of each quarter to apply for a new permission to entry.

Indeed, as far as his visa status is concerned, I still prefer to follow the “don’t ask, don’t tell” policy with my new American colleague.

The cumbersome and restrictive visa regulations make it much harder to attract the best and the brightest from all over the world; they have long been a significant obstacle to academic exchanges of all sorts. A large segment of the Russian officialdom, especially those with a background in the security forces, naturally perceive any such potential relaxation as an invitation for other countries to send more spies into Russia. Others, often including those who might be generally quite liberal, are against any unilateral relaxation of the visa regulations, which might be construed as a sign of weakness and an invitation for other countries to demand similar unilateral concessions on other issues.

Yet the seriousness of the problem seems to have been recognized by the government. Amendments to the immigration laws in May offer preferential treatment to “highly qualified” (and highly paid) foreign professionals. These new visa regulations went into effect this summer—but curiously, they do not apply to researchers and professors, who might not necessarily qualify as “highly skilled professionals” since under the new law one must receive a salary of at least $67,000, or 2 million rubles, to fit the bill.

New measures being discussed for faculty and researchers will, hopefully, solve some of the most pressing problems. Among these measures are the proposals to include professors into the category of “highly skilled professionals”; to create an option of receiving an “academic visa” in as little as three days; to allow foreign scholars in Russia to move more freely around the country without having to register with the authorities at each point they visit; to allow their spouses to work in Russia without having to apply for separate work permits. While these amendments might seem less than revolutionary, they could help to attract more highly qualified foreign professionals to Russia.

A lot more needs to be done in this area to make Russia more competitive. Russian visa rules and regulations are still saddled with completely superfluous requirements. For example, foreigners planning a long-term stay in Russia must present together with their visa application a medical certificate showing that they are HIV-negative, whereas those coming for a short visit do not. This is not only an appalling act of discrimination but also a measure that makes no practical sense. Russia’s ability to attract academics from abroad requires changes in other rules: if we want to have a foreign Nobel Prize-winning professor to teach at our university, we should at the very least recognize his doctoral degree—currently in order to receive such recognition he would have to translate his dissertation in its entirety and submit it for what is in fact a new defense!

While visa regulations are important, there is also the issue of their implementation. It is one thing to mandate a relaxation of immigration laws and to create new categories of visas; it is quite another to actually make Russian consulates change their work habits and attitude toward visa applicants. Still, the very fact that President Medvedev in his address to the parliament last year openly said that “we need them” (i.e. skilled professionals from abroad), and not the other way around, gives some grounds for cautious optimism.

Igor Fedyukin is director for policy studies at the New Economic School.