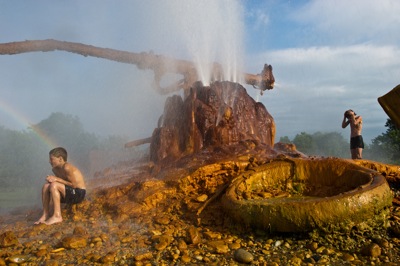 Children play in a natural spring surrounded by debris. Photo by Yury Kozyrev

Following the war, a strong Russian presence brings tourism and development to Abkhazia. Yet some locals worry about a loss of sovereignty.

The Novy Afon Monastery looks out over Russian high-speed military patrol boats guarding the Black Sea coast of Abkhazia, a mountainous enclave whose wild, subtropical nature and paradise-like beaches has attracted empires from the Romans to the Soviets. And it remains contested ground today.

After the Russian-Georgian war in 2008, when Russia recognized Abkhazia’s independence, people there felt relieved, and unperturbed by the fact that few other countries followed Moscow’s lead. The United States and the European Union continue to view Abkhazia as Georgian sovereign territory. And apart from Russia, only Nicaragua, Venezuela and the island nation of Nauri recognize Abkhazia independence.

Yet it has taken only two years for Russia to establish its military and business presence in Abkhazia. Thousands of Russian soldiers and Federal Security Bureau officers are moving into freshly painted, three-story housing in Gadauta base. Russia deployed its modern air defense system, the S-300 missiles, at its base in the Gali region. Day and night, trucks create clouds of dust as they supply sand and gravel for construction. On a recent afternoon, a train loaded with Russian armored vehicles and tanks was parked outside the town of Gadauta in Abkhazia. Yet for many Abkhaz, at least for now, Russia’s benevolence and protection is all they need.

“We used to be called a black hole, and now we are embraced by the biggest Russian investors and powerful figures,” Astamur Ketsba, the head of the Gagra regional administration in Abkhazia, said.

Until recently, Abkhazia was routinely called a post-Soviet “frozen conflict”—a breakaway region no longer really part of Georgia, which claimed sovereignty over it.

And it felt like a place in limbo. Since a short and bloody war with Georgian forces in 1993, the breakaway region, about half the size of Connecticut, had been isolated and decaying. Rain and snow fell through the roofs of the graceful 19th-century palaces of the Prince of Oldenburg; moss grew over the snowy white marble statues and round ponds in the tropical botanical garden along the Gagra seashore.

Today, local authorities are in a hurry to let Russian buyers grab and restore distressed real estate, ancient and modern. Abkhaz President Sergei Bagapsh confirmed in a recent interview that Russian citizens will soon be able to privatize real estate in Abkhazia.

Russian President Dmitry Medvedev, who recently visited Abkhazia, and Prime Minister Vladimir Putin have promised to channel billions of dollars to support Abkhaz independence by boosting its economy and building up its infrastructure and military.

Putin is overseeing the reconstruction of the Pitsunda resort, famous for its 100-year-old pines. Locals have dubbed it “Putin City.” Luzhkov is investing $70 million in new construction outside Gagra, and it, inevitably, has been called “Project Moscow.”

Yet not everyone in Abkhazia is enamored of all this investment and the growing Russian footprint. Tamara Lakrba, the chief architect of Gagra and Pitsunda towns and a fierce defender of their low skyline and provincial charm, fears Abkhazia is being overrun. She provocatively compared the last two years of independence to “living on the front line.” Lakrba is not talking about the fight with Georgians, but rather the tension with Russian businessmen who want to build a few stories above the height limits.

“The moment they cut down the first hundred-year-old cedar or build higher than the allowed three floors in Gagra, every single Abkhaz will be protesting in the streets,” she said.

Russia is developing much bigger interests than resorts. Rosneft, Russia’s state oil company, has opened an office in Sukhumi, the capital, and announced the investment of $32 million in geological research offshore.

Sergei Klemantovich, the Russian owner of El Petroleum, said the authorities in Moscow should ignore outside criticism about its growing involvement in Abkhazia. On a recent visit to Tbilisi, the Georgian capital, U.S. Secretary of State Hillary Clinton called Abkhazia “occupied ground.”

Klemantovich mines gravel in Abkhazia and ships scrap metal from the port of Sukhumi to Europe, ignoring Georgian protests. Last year, Georgian sea patrols confiscated a ship with 20 tons of his cargo, but the businessman has continued to ship this year.

“Russian military bases have arrived to stay and provide security for us,” he said.

Some in Abkhazia quietly bristle at any notion that they are becoming a vassal state of Russia. Abkhazia’s defense minister, General Mayor Mirab Kishmaria, said he and other Abkhaz officers spilled blood to win their independence.

“Russian deputies will never see the day, no matter how hard they push, when Abkhazia eliminates its own independent army,” he said.

Kishmaria said he welcomes the military hardware he has received from Russia, and Russia’s growing military presence, but he added that he will enlarge Abkhazia’s army at the same time. “Those who want to demilitarize Abkhazia were not here during the war; they do not know that the Abkhaz people are a brotherhood of warriors,” he said.

The arrival of so many Russian troops and security personnel has led to some tension. For many years, Col. Lavrenty Mikvabia patrolled the border with Georgia at Gali. But since thousands of F.S.B. troops arrived, some Abkhaz border guards have been fired. And Mikvabia said his officers are resentful and alarmed.

“They are making a huge, reckless mistake by removing the Abkhaz military from our own border,” Mikvabia said. “They show they have no respect for us. This is my home. I can defend it better than any Russian soldier if I have to.”

In Tbilisi, the authorities are also smarting, and Georgian President Mikheil Saakashvili told his government agencies to keep records of Georgian property sold to Russians by the Abkhaz. “I want to tell some imprudent Russians [they] are illegally buying houses in Abkhazia, in illegally occupied Georgian territory,” he said.

Georgia’s state minister for ethnic reintegration, Timuri Yakobashvili, told Russia Now that 500,000 displaced people from the 1993 conflict will one day claim their property in Abkhazia. “Putin, Luzhkov and Rosneft are breaking the Georgian law by working on our occupied territory,” Yakobashvili said.

An American in Abkhazia

Bruce Talley, 51, of Del Mar, California, was an investment banker whose wanderlust and business sense brought him to Russia's Krasnodar Region and, more recently, to Abkhazia. “Curiosity drives me a great deal,” said Talley, who appears to be Abkhazia's first American commercial real estate developer. Four years ago he had something like an epiphany: Abkhazia “is much more attractive than anywhere on the Black Sea coast. It is poised to be another Croatia/Montenegro.” Talley is making it his business to attract Western developers to both private and state projects. “I want to be ahead of the curve as this place develops," he said. "Costs are going to be much lower on the Abkhazia side.”