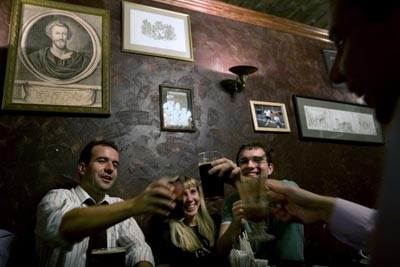 Immigration policy is relaxed for highly skilled workers as the Kremlin aims to harness scientists and managers from Europe and beyond.

In May, legislation was passed easing immigration rules for highly skilled workers. President Dmitry Medvedev has said that Russia must modernize or die, and importing experience from abroad will help in this mission. Medvedev also hopes to help attract more foreign investment by making it easier to bring over managers and specialists.

The development of high-tech industries has grabbed most of the headlines in the last few months. While Russia deserves its reputation for educating scientists, it falls down when it comes to offering them commercial opportunities and therefore loses many scientists to other countries.

Reversing that trend is the driving principle behind attracting companies such as Nokia and Intel to Skolkovo, “Russia’s Silicon Valley” just outside Moscow.

The country also needs to attract experienced managers across its corporate sector to improve efficiency, productivity and innovation. A report from IBM published last year points out that while the quality of Russia’s scientific research institutions is among the best in the world, management schools rate poorly. This means “skills are an obstacle for many Russian companies, with 59 percent reporting labor resources as a significant obstacle to development,” the report concluded.

Foreign managers will be key then, as Lilit Geovorgyan of consultancy IHS Global Insight put it, because they “bring relevant skills, since most of the companies envisaged to be the backbone of modernization are likely to be designed after Western prototypes specializing in cutting-edge high technologies.”

Gennady Odarich of PricewaterhouseCoopers added that foreign managers can also act as role models for the Russian staff under them, helping to mold future generations in skills and mindset.

The Russian government has essentially imported immigration programs for qualified people from countries such as the United Kingdom, Canada and Australia. The new legislation transforms a Byzantine immigration procedure into one of the easiest, for many skilled people at least.

Employees who qualify, and their families, receive a three-year visa rather than endure a yearly trek home to reapply. They also gain the additional benefit of bypassing emergency income tax (30 percent for the first six months) and go straight onto Russia’s flat 13 percent rate.

Perhaps the biggest bonus for companies is that highly skilled employees are now exempt from the Federal Migration Service’s annual quota on foreign employees. To contract foreigners who don’t qualify as highly skilled, companies must still apply for permission to employ from abroad in January, with no recourse to revise this through the rest of the year.

Headhunters such as Nikita Prokofiev of Odgers Berndtson said that Russian companies are now focused on importing only the most valuable professionals while filling most of their positions locally. “The market has evolved,” he said. “Fifteen years ago, someone bilingual with a basic command of finance was much in demand, but now companies are only looking for senior people with very specific skills.”

And what is the definition of a highly qualified employee? It is simply someone who makes more than $67,000 a year. In contrast, salaries in the local market are still recovering from the economic crisis.

Click on the picture to see more. Photos by: Anna Artemeva

Russia ranks second in the world, after the United States, for the total number of immigrants (12 million) living within its borders, according to the United Nations. The overwhelming majority of consists of inexperienced workers from post-Soviet republics, especially from Central Asia. More than 40 percent of newcomers do not have higher education. Another problem is their poor command of the Russian language, which impedes many of them from successfully competing in the higher-end labor market or defending their rights before employers.