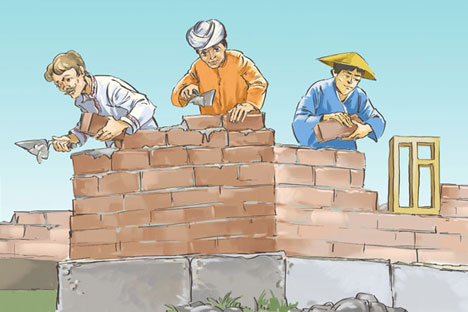 Two-thirds of Russian territory is in Asia, and yet opinion polls show that Russians see themselves as Europeans, even those living on the Pacific coast and near the Chinese border. And there is a good reason for that: Russians are indeed Europeans who were driven into Asia by fate and history. Now they have to take things as they are, building relations with Asian neighbours, on whom Russia’s future largely depends.

China is Russia’s most important neighbour, given its vast scale, the length of the common border, and China’s expected impact on Russia’s development, especially in eastern regions. The 400-year history of Russian-Chinese ties is unique: it knows no wars, though there were difficult times and minor skirmishes. This is a very rare case.

Today, Russian-Chinese relations are at their peak. The two nations have happily avoided problems that strain Russia’s ties with other countries in the region, such as territorial disputes with Japan or political problems with North Korea. Problems connected to the demarcation of the 4,209.3 km frontier, which soured relations for years, have now been completely settled based on international law. Hundreds of political, economic, cultural and other events were held in 2006, the Year of Russia in China, which was followed by the Year of China in Russia (2007). The countries’ heads of state meet 4-5 times a year. It is formally recognised that Russia and China are linked by strategic partnership and cooperation.

Of course, all this does not mean that there are no difficulties in Sino-Russian relations. At the same time, the ones that exist rarely become the subject of public debate.

Cooperation with China is extremely important for Russia in international terms. China shares Russia’s ideas on the future multi-polar world structure. These countries do not want to live in a world completely dominated by one nation that ignores their interests. At the same time, they are quite happy with the existing post-war world order and international legal system, with the UN Security Council as the highest authority. The status of permanent members of the Security Council puts them on equal footing with the United States, a country which is much more powerful in all other respects, and one that tries to change this system, which serves to restrict its opportunities.

Both Russia and China dismiss any advice on their internal political structure, seeing it as “interference in internal affairs”, and support each other in their fight against separatism (Russia supports China on Taiwan, and China backs Russia on Chechnya). It is for this reason that both countries have campaigned over the past few years to preserve the principles of international law and UN’s status, coordinating their voting in the UN on key global problems and acting as allies in talks on Iran, South Korea, Kosovo and other global political problems.

China is Russia’s important strategic partner, and it is thanks to its ties with China (as well with other Asian nations) that Russia’s policy can become more multifaceted, finding its own voice and making Russia an important centre of global influence.

Those who want to see Russia as a more independent and powerful nation should support its ties with China. There is absolutely no talk of a military alliance, something neither China nor Russia want.

In economic terms, China is one of Russia’s crucial partners, especially in the development of Russia’s Siberia and Far East. China is also Russia’s important regional partner. As a member of the Shanghai Cooperation Organisation, together with Russia it helps solve common problems in Central Asia – fighting religious extremism and terrorism, supporting secular regimes in the region’s countries, and fostering their economic and social development.

China is also interested in Russia as a geopolitical and economic partner, though Russia currently plays a much smaller role in China’s politics than China in Russia’s. Yet, for a number of reasons, China prefers to have a stable and strong (though, perhaps, not very strong) Russia. Beijing wants a stable Russia capable of becoming an independent centre of power, as a counterweight in China’s complex relations with the United States and Western Europe, as one of the guarantors of China’s independent foreign policy. Stability on the border with Russia, as well as those with other neighbours, is very important for China’s economic development and for achieving the main goal set by the country’s current leadership. Finally, Russia is an important provider of goods and raw materials that China cannot buy elsewhere (e.g. weapons) or which it has in insufficient quantities (e.g. oil, forest and other raw materials). It is for this reason that Beijing has been focusing on its border problems, migration and trade in recent years.

China wants Russia to be stable and economically developed, it is ready to help Russia develop its border areas, and does not comprehend Russia’s concerns about its intentions, combined with a failure to solve its own problems (such as boosting production, improving the investment climate, developing the Far East etc.).

Meanwhile, both Moscow and Beijing perfectly understand the importance of a constructive partnership with the West, which both countries need in order to strengthen their international standing, solve pressing global problems (including in the area of global non-proliferation of WMDs) and promote economic development. It is for this reason that China and Russia oppose the creation of an anti-Western military alliance.

Thus, maintaining their constructive cooperation and avoiding the extremes of either enmity or a close alliance is in the best interests of both Russia and China.

Economic ties between Russia and China are developing rapidly, with trade volume topping $56 billion in 2008, making China Russia’s third biggest trade partner, though this is below the level of China’s trade with a number of other partners. Trade declined in 2009, but is expected to rise above the 2008 level. If this happens, a long-term target of bringing Russian-Chinese trade to $60-80 billion by 2010, which was outlined back in the early 20th century, will be achieved.

All this does not mean that there are no problems in this sphere. Russia is concerned about its growing import/export ratio, declining equipment exports, and low levels of mutual investment. Some of these problems are already being actively addressed. Thus, the completion of a new oil pipeline from Russia to China, scheduled for this autumn, will allow Russia to double its oil exports to 30 million tonnes a year, becoming China’s largest provider of oil. During Vladimir Putin’s visit to China in October 2009, a programme of cooperation between the Far East and East Siberia in Russia and Northeast China in 2009-2018 was agreed upon and signed, involving significant investments in a number of projects in both countries. Nine of these are already being implemented in Russia.

There have been publications in China recently saying that the country must ensure its economic interests worldwide using its army and navy, even seeking to control global resources and their distribution. Officials and experts, however, dismiss this as private ideas expressed by certain citizens. At the same time, speaking informally, many admit that nationalist theories are indeed supported by certain parties in law enforcement.

Moscow is aware of this tendency, and, while not seeing it as Beijing’s official line, cannot ignore it. In this respect, Russia’s closer cooperation with other countries in Southeast Asia – Japan, South Korea and India, which share Russia’s concerns – takes on an added importance.

Russian-Chinese relations are also developing via multilateral groups and organisations, with the Shanghai Cooperation Organisation (in which India is an observer) and BRIC group as the main ones. For Russia and China, the Shanghai Cooperation Organisation is an important tool for coordinating their interests in Central Asia. This is one area in which their interests fully coincide. Both Moscow and Beijing want Central Asian countries to be stable, secular and economically developed nations. This is what India wants as well and, as an observer nation, it could take an active role in solving the region’s problems such as fighting terrorism and drug trafficking, and in contributing to the region’s development.

India could also be instrumental in promoting the democratisation of Central Asian countries, even if by simply sharing its own political experience with their public.

The BRIC group is an important forum for coordinating the interests of key non-western centres of a multipolar world, and thus has a good chance of becoming the most influential of all international organisations of which Russia is a member. The evolution of the BRIC group into a de facto alternative to the G8 would meet Russia’s interests, as well as those of India, China and other nations that are not part of western blocs.

Pressing global issues, such as the reform of international institutions and global security problems, including energy security and climate change, should be included in the BRIC agenda. Particularly important in this respect is the challenge of overcoming the financial crisis. The BRIC agenda could also include a comparative analysis of development models for its member states, along with other non-western models and their strengths and weaknesses, in light of the continuing crisis (for example, China’s export model and India’s model, primarily oriented towards internal consumption) and the sharing of anti-crisis experience.

The development of Russian-Chinese relations does not contradict the interests of other nations, nor does it hinder Russia’s ties with other partners. To modernise the Russian economy – a task set by President Dmitry Medvedev – it is necessary to cooperate with all leading nations and to make use of their experience. This in particular refers to such traditional friends of Russia as India.