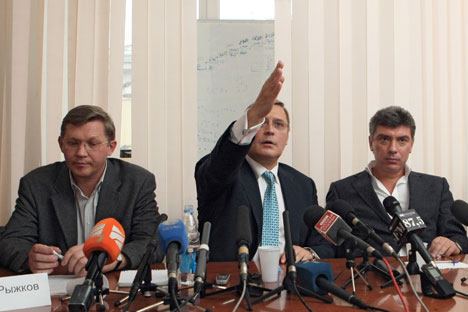 The leaders of Russia’s non-parliamentary opposition, Mikhail Kasyanov, Boris Nemtsov, Vladimir Ryzhkov and Vladimir Milov, announced the founding of a new coalition at a press conference that attracted an unusually large media crowd. The turnout attests to the media’s craving for any signs of life from any politician that claims to protect democratic principles in Russia. Mikhail Kasyanov, the leader of the Russian People’s Democratic Union (RNDS) and a former prime minister, said the new movement’s chief strategic objective is to “change national policy through the necessary transfer of power.”

The fact that this event took place at all allows for the conclusion that in today’s Russia, a press conference can be held in downtown Moscow to announce goals that push the envelope, and the press would not be afraid to attend it, and it would not be broken up by the police. This all represents enormous headway compared with, for example, the 1970s.

The press conference was initially to be held at the state news agency RIA Novosti, and although the organizers were not directly turned down, the conference was moved an hour before it started due to “technical difficulties.” Instead, the four leaders gathered at the Moscow headquarters of the opposition movement Solidarity. Based on this, we can come to a second conclusion: Russia does not have a tried-and-true system for suppressing dissidence. Each and every case of someone expressing opposition to the authorities requires a tailor-made approach and an idiosyncratic solution, although this by no means at all implies that there is no silver bullet available for putting the squeeze on nonconformists.

The so-called “non-systematic opposition” is going to establish a party that could participate in Russia’s parliamentary and presidential elections in 2011 and 2012. “We are not naïve. We realize that our political party will not be registered, but the constitution gives us right to establish a party, and we will fight for that right,” said Kasyanov.

One of Solidarity’s leaders, Boris Nemtsov, who was Boris Yeltsin’s deputy prime minister and at one time considered a potential Yeltsin successor, said that the coalition would put forth a single nominee for president. “We are not going to take part in any backdoor negotiations with the Kremlin. The regime has thrown us out on the streets, so mass protests will be our course of action,” said Nemtsov.

Vladimir Ryzhkov, the former deputy president of the State Duma and chair of Russia’s Choice, a main pro-Kremlin party under Yeltsin, said that in the near future, the coalition will start building up its regional structure, which, according to the law, is one of the requirements for registering a political party. Ryzhkov also said that the future party’s agenda would soon be released.

What are the coalition’s chances for success?

Not one opposition movement in Russia to this day can boast of any significant public support. Russians have always been suspicious of those who have had a falling out with the ruling elite. A benevolent person (and benevolence is perhaps the central, ubiquitous feature in Russian mentality) draws the conclusion that if a politician is not in power, he cannot help, cannot lobby in Moscow for a new gas pipeline, cannot hold local bureaucrats accountable and cannot allocate money to build a new school, kindergarten, road, housing, etc. The average Russian voter relies in the first place on the candidates to resolve their meat-and-potatoes problems. They generally treat discussions on democracy and human rights as being abstract, while democracy is seen as not having anything to do with increasing their living standards.

There is, of course, the protest vote factor—when people cast their votes for anyone who is at least overtly at odds with the authorities as a sign of general discontent with the government’s policies. Beneficiaries of such votes include Vladimir Zhirinovsky’s Liberal Democratic Party of Russia (LDPR), the Communist Party, or the relatively new party, A Just Russia. Voters usually do not read too much into pseudo-opposition parties’ agendas, but rather just vote against United Russia, the ruling party.

The new coalition, nevertheless, is hardly even able to win over like-minded supporters. The voters’ protest voice, for one thing, has to overcome a number of difficulties, such as the seven-percent barrier for State Duma elections. Doing so is extremely difficult for the opposition parties, given the scale of falsified election returns in Russia at all levels. Therefore, obtaining the minimum seven percent of officially recognized votes actually entails having to snatch up 20-25 percent of the vote. If voters are not confident that a party can clear this seven percent barrier, they are likely to reconsider voting for complete outsiders, bearing in mind that they would be throwing away their vote, and simultaneously, in essence, voting for United Russia.
The new coalition, however, will soon have to overcome yet an even higher administrative barrier: registering their organization. This will be an extremely tall task, if not impossible. Russian rules for registering parties and public organizations have became so tough over the past decade that the ruling bureaucracy can easily block any unwanted movement at any stage of the registration process, not to mention any candidate.

Kasyanov, Nemtsov, Ryzhkov and Milov might potentially have an ace up their sleeves: a mass protest movement using street demonstrations and omnipresent civil disobedience that could help overcome any bureaucratic challenges. In practice, however, Russians over the past 10-15 years have almost stopped taking part in any mass political rallies, and almost without exception have sunk into an bottomless pit of apathy and total indifference to politics and any form of civil activism. Keeping this all in mind, the new coalition so far has no chance of making any difference in the political landscape.

For another view on the Russian opposition, see United we stand, but what for?