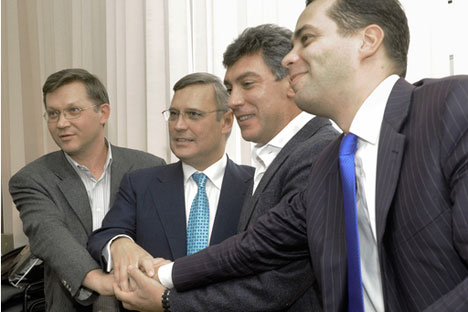 I know what former US President Ronald Reagan would have said had he learned that Russian liberals decided to unite: “There you go again.”

Indeed, anyone watching Russian politics couldn’t escape an acute sense of déjà vu upon learning that four Russian opposition leaders—Mikhail Kasyanov, Boris Nemtsov, Vladimir Ryzhkov, and Vladimir Milov—have signed an agreement to form a new coalition named “For Russia without Lawlessness and Corruption.” Other similar coalitions appeared and then rapidly disappeared in the past, loosely following Russia’s election cycles: Committee 2008 (2004), The Other Russia (2006), National Assembly (2008), and Solidarity (2008). Given that the faces of the four co-founders look all too familiar (perhaps, only Vladimir Milov, the leader of the “Russia’s Democratic Choice” movement, could be counted as a relative newcomer) there is little reason to expect that this time around, something will be different.

Suspiciously absent from the list of signatories was Garry Kasparov, a tireless coalition builder and the co-founder (along with Boris Nemtsov) of Solidarity. An official explanation was that Kasparov was “out of the country,” yet everyone knows that given his dictatorial impulses, Kasparov would be a death sentence to any coalition. (Milov reportedly threatened his partners: “Kasparov in, me out.”). On the other hand, Kasparov has name recognition and proven fundraising abilities. With him “out”, the new coalition might last longer, but achieve less.

A page-and-a-half agreement doesn’t tell much about the coalition’s ideology or long-term objectives. It however defines two major immediate goals: to nominate a single candidate for the 2012 presidential election and to form a “united democratic” political party (with the name yet to be chosen) to take part in the 2011 Duma election. Fulfilling the first goal looks doable if the spirit of cooperation will suddenly prevail—obviously not a sure thing, given that every coalition member will likely to fight for being the chosen nominee. This however doesn’t guarantee the presence of a “united democratic” presidential candidate in 2012 since any of the multiple “splinter” groups left out of the coalition may come up with their own, exotic, candidates like British citizen Vladimir Bukovsky or the Prisoner-of-Conscience-in-Chief Mikhail Khodorkovsky.

The second goal—to form a “united democratic” party to compete in the 2011 parliamentary election—looks more like a joke, if not a deliberate fraud. To register a political party in Russia, a group has to collect at least 40,000 signatures of prospective members. Nemtsov’s Solidarity can boast no more than 4,000-5,000 members at best; Kasyanov’s People Democratic Union has even less; Ryzhkov’s unregistered Republican Party simply doesn’t exist; and Milov’s Democratic Choice only represents himself and a dozen obscure activists. In order to take part in the next year’s Duma election, the new party would have to start the registration process no later than early next year. There is no way that the coalition will be able to bring together so many supporters in such a short time. Acknowledging the problem, Ryzhkov already promised protest actions to be held should the registration of the new party be denied. It appears that these “protest actions” will turn out to be the only real outcome of the whole new party idea.

It’s commonly believed that all previous liberal coalitions collapsed as a result of internal squabbling. This might be true, but only partly. The real reason why such coalitions don’t last is a complete detachment of Russian liberals from the interests and concerns of ordinary Russians. The first signs of this persistent detachment are already there. Nezavisimaya Gazeta reported that Milov had put forward the idea of direct elections of regional governors as the cornerstone of the coalition’s political platform. Other coalition members opposed him, insisting that a broader set of political demands, such as freedom of demonstrations, should be promoted instead. At the same time, the results of a recent VTsIOM poll show that Russians consider alcohol and drug addiction, inflation, and unemployment as Russia’s three major problems. What country are Milov and Co. living in?

Russian liberals should finally realize that being a liberal doesn’t mean simply possessing a set of abstract liberal “values.” It means offering liberal solutions to people’s everyday problems. Unless this happens, the new coalition will become another short-lived reminder of a popular definition of insanity: doing the same thing over and over again while expecting different results.

Eugene Ivanov is a Massachusetts-based political commentator who blogs at

For another view on the Russian opposition, see Opposition vs. apathy