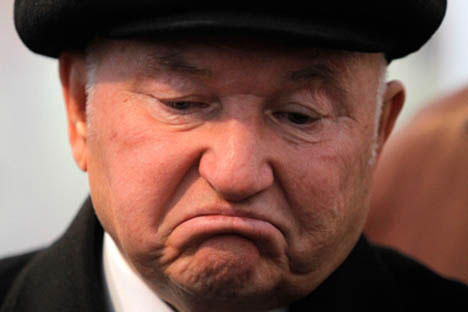 Yuri Luzhkov has indicated that he would like  to stay until theend of his term of officeSource: Reuters/Vostock Photo

The coinciding interests of opposition politicians and federal authorities provided Russia's capital with a rare political show not seen in years. Yet experts disagree over whether Yuri Luzhkov's departure from the Moscow mayor's office will improve the investment climate in Moscow.

At the end of September, Russia’s three state-controlled national TV channels ran compromising documentaries on Moscow mayor Yuri Luzhkov, the first time state-owned media has attempted to discredit a national political figure on air since the end of the 1990s.

Luzhkov, who has run Moscow since 1992, was accused of everything from illegally demolishing historical buildings to awarding favorable contracts to his construction magnate wife, who also happens to be Russia's only female billionaire, Elena Baturina. The last straw was apparently his poor handling of the summer wildfires crisis, which he had spent vacationing in Austria.

"He paid the nation's highest pensions when we lived on the verge of starvation, he kept the streets clean and the heat on in winter," reminisces Sergei Danilov, a small business owner and lifetime resident of Moscow, about Luzhkov in 1990s.

"For some reason in the early 90s, they stopped collecting garbage in the city. I don't know if it was criminal squabbles over turf or striking workers, but those bags pilled up. Luzhkov set that straight right away," adds Nikolai Grigoriev, also a lifetime resident. At one time, Moscow's babushka's carried Luzhkov's photo, together with that of then-President Boris Yeltsin, in their wallets.

Monuments to Luzhkov's tenure can be seen across Russia's capital. The Christ the Savior Cathedral (restored 69 years after the Bolsheviks had dynamited the original structure to make way for, originally, a skyscraper, and then, a swimming pool). The latter had been a project to symbolize Russia's rebirth from Communist yoke, and donations to restore the original structure poured in from the country's vast corners. Unofficially, some Christians bemoan how much of that money was stolen in the process of restoring the lavish cathedral.

Luzhkov's popularity (he won mayoral elections in 1996, 1999 and 2003) was backed by a record of both socially-oriented and pro-business policies as Moscow turned from a grey, Communistic city to a booming construction site and financial center. Yet his reputation became tainted as Moscow's historical center was raised to make way for dubious construction projects, the city's traffic grinded to a snail's pace amid rapidly rising car ownership rates and accusations of clan-like control over the business environment surfaced.

While the anti-Luzhkov campaign has damaged the mayor's reputation, it has not devastated it, reported RIA Novosti. About 42.2 percent of Russians polled think that the leadership in other Russian regions is more corrupt than Moscow, while 49.8 percent said they believed federal power bodies were just as corrupt as the Moscow authorities.

"Replacing Luzhkov with a radical reformer would be a mistake," explained Andrei Ryabov of the Carnegie Moscow Center. "I'm not an apologist for the mayor at all, but I acknowledge that he is a strong politician. He knows how to balance competing forces. I don't see anyone else on the political landscape who would be able to accomplish that," he said.

"A new mayor could push through important, yet unpopular policies. He could try to bring more competition and order to the city's pension fund and municipal services. God forbid social benefits would be reduced. Then we'd have pensioners on the streets, and this instability would be bad for business. You can't have so-called liberal reforms only in Moscow. They have to be done at the national level, and the Kremlin realizes this," continued Ryabov.

Not everyone agrees. An independent analyst who refused to be identified argued that while "in the short term, there could be some minor uncertainty under a new mayor, Luzhkov's departure would eventually open up major opportunities for business, especially in construction. Foreign investors should welcome this as a very positive long-term step against clan-like control of the economy and in favor of more competition."

Chris Weafer of Uralsib Bank agreed. “Whenever you have a long-standing administration change, opportunities open up for investors. This applies to any major city in the world. When a new team arrives, new players are able to bid and win contracts,” he said.

According to Mark Rubenstein, a bank analyst with the finance company Metropol, “There are many ways in which the business and investment climate can be improved in Moscow. But this applies to the country as a whole. I think we’re going there, but this change will come gradually, over many years. I don’t expect any major changes in the investment climate in the short term regardless of who the new mayor would be,” he said.

"The problem is that Russia's institutions are weak. A lot in business currently depends on personal connections and favors. If you remove a figure like Luzhkov without a concentrated effort to reform the entire system at the national level, you simply introduce more chaos. And investors don't like chaos," concluded Ryabov.