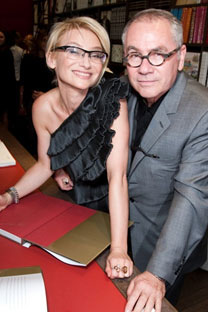 This summer the two grandes dames of Russian fashion, style icons and arbiters of taste both, or, simply speaking, the editors-in-chief of cult magazines, sent all of fashion-conscious Moscow into a tailspin. Within a few months of each other they both left their ultra-high visibility posts. Though they left for different reasons, their departures were equally unexpected and stunned all concerned. Evelina Khromchenko, editor of the Russian edition of L’Officiel, was fired in the most brutal and unceremonious manner. She arrived at work one morning to find that she had been locked out of her office. In her place the publisher had put his wife, a former model who had worked in the editorial offices of L’Officiel for a mere six months. The departure of Alyona Doletskaya, the editor of Russian Vogue, was not so scandalous and dramatic. But there too there were undercurrents. In a letter to staff, the president of Condé Nast International, Jonathan Newhouse, was full of compliments for his outgoing editor: “Alyona Doletskaya is the very embodiment of Vogue: she is as charismatic and elegant as the magazine she publishes. Alyona is a true style icon, the incarnation of glamour — both in her country and in international fashion circles.” Newhouse went on to say: “Alyona’s role in forming the magazine is so unique that, in a certain sense, to replace her is impossible.” Behind all this effusiveness one sensed a sigh of relief: “Thank God we managed to solve all our problems peacefully.”

In addition to the nearly concurrent departures of Khromchenko and Doletskaya, there was another symbolic coincidence. Both women had worked for 12 years as editor. This allowed journalists to write about “the end of an era of charismatic editors-in-chief”. But as it soon emerged, it wasn’t the end at all. At least not for Evelina Khromchenko.

The Way to the Top

Their success stories were different. Alyona Doletskaya was born into the family of a famous Moscow surgeon. Her parents’ social circle included film and stage directors, writers, and actors like Vladimir Vysotsky. Doletskaya graduated from the philology department of Moscow University where she eventually taught and translated English literature. After perestroika she easily found her place in the new, post-Soviet life. Thanks to her outstanding English and good family connections, she began working for foreign companies — DeBeers, the BBC, the British Arts Council. The editorship of Russian Vogue was a sort of logical continuation of her career path. In the 1990s, foreign publishers planning to open offices in Moscow came looking mainly for Russians with experience working in Western companies. There was no better recommendation.

Evelina Khromchenko, on the other hand, is the epitome of a self-made woman. She was born into an ordinary family far from Moscow, in the republic of Bashkiria. At the outset of her career in journalism she made what turned out to be a very smart bet: she decided to write about what didn’t yet exist — Russian fashion. Soon this topic became the family business. Evelina and her husband, Alexander Shumsky, created a PR agency called Artefakt; it specialized in organizing show business events. Alexander eventually became the producer of Russian Fashion Week. By the time L’Officiel arrived in Moscow, Evelina was well known as one of Russia’s very few fashion experts. It’s not surprising that the editorship went to her.

Their different paths to the top were reflected in the magazines they headed. In Alyona’s hands Vogue became a sort of Russian bible on The Art of Living. Beautifully and expensively. Every issue featured photographs of the rich and famous and reports on exclusive social gatherings where Alyona herself was a habituée along with model Natalia Vodyanova and her English husband. Evelina was rarely seen at social events. Her talent lay elsewhere: she was a master at creating Russian stars in the fashion firmament. Stylists and assistants who worked with her became successful designers. Vika Gazinskaya, for example. Thanks to Khromchenko’s magic touch the careers of Alyona Akhmadullina, Denis Simachev and Konstantin Gaidai took off.

Both Doletskaya and Khromchenko were always broader than the brand they were promoting. Alyona Doletskaya was well known in the West because of her friendships with international celebrities and frequent interviews. It’s not surprising that when a rumor went round that Vogue Editor Anna Wintour was tiring of fashion in New York, the fashion industry and the Western mass media “nominated” Doletskaya as the most worthy candidate to replace her. Khromchenko was always more successful in the Russian field. She co-anchored the popular television program “Fashion Verdict” where she acted as “prosecutor”, curtly explaining to contestants why they shouldn’t dress the way they did.

Small wonder that Evelina was asked to dub the role of Miranda Priestly in the movie “The Devil Wears Prada”. They say that Evelina’s attitude towards her work recalled that of the notorious Miranda as played by Meryl Streep. Evelina had a habit of publicly dressing down fashion show organizers who neglected to give her the “right” seat. She was asked about this habit by her colleague Alyona Doletskaya in an interview for Vogue. This was their one and only meeting. It became possible only after Evelina had been shown the door at L’Officiel. Doletskaya asked Khromchenko: “Don’t you think that the job of editor-in-chief is susceptible to wear and tear?” At the time, many readers were outraged at Doletskaya’s tactlessness. Here she had invited Khromchenko for a friendly chat and was accusing her of past her prime. A week after that exchange, Doletskaya announced that she was leaving Vogue. It became clear that her pointed question had not been an attempt to wound a colleague but a reflection of her own thoughts about herself.

Sometimes They Come Back

“You don’t need to turn this into a tragedy. I’m taking a vacation to take care of myself,” Doletskaya told journalists. Two years ago when she was asked about the possibility of leaving Vogue, she said that she loved her work and had no plans to go elsewhere. Still, she did say that she had no doubt that “there is life after Vogue.”

As for Evelina she is returning in triumph to her much loved old job. Last week the president of Les Editions Jalou, which owns L’Officiel, appointed Khromchenko editorial director of Les Editions Jalou. At the same time Evelina will oversee the relaunch of the Russian L’Officiel with a new Russian publisher. The old publisher and his young and talented wife will have to find new jobs. A masterly move in the style of Miranda Priestly. As you may recall, an unsuccessful attempt was also made to unseat her. “I’m not a combative person,” said Evelina, “but if there’s no choice, I can stand up for myself.” Yes, in the delicate world of fashion one must be a woman of iron to survive. So the era of charismatic editors lives on!