Big gains still to be made  from small changes 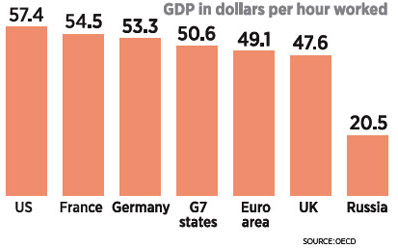 Russia can expect another decade of rapid economic growth if it manages to close the productivity gap that exists with Western countries.
What will Russia look like in 2020?

If the Kremlin has its way, then glittering skyscrapers will house the Russian banks that form a nerve centre of the globe’s financial markets. Meanwhile, Russia will constitute the largest consumer market in Europe, with some 60pc of the population considering itself middle class.

Fantasy? Yes and no. Russia may fall short of this vision, but it has the potential to get further down the road than many might think.

It’s a bold idea, especially in the current climate, but the reason the Russian government can be confident of another decade of strong growth is that the country has barely scratched the surface of improving productivity.

This potential source of growth is ideal for current times in which investment flows and bank credit remain restricted, because improving productivity offers huge gains at little cost.

During the boom prior to 2008, little attention was paid to productivity, with most companies focused on growing as fast as possible.

However, productivity in Russia is just 16pc of that in the EU.

Fat margins in a young market made the issue of efficiency irrelevant until now, but gains to be made from small improvements in management are huge.

“If as little as 10pc of the working population worked at the average productivity level in the US, then the total output of the Russian economy would increase 1.4 times, and GDP 1.5 times,” claims Alexander Idrisov of Strategy Partners. In this new age of restricted financing, it’s dawning on companies that Russian workers may cost a fraction of those in the West, but those savings are lost when you consider that it takes Russians many times longer to make a single car than Western factories can manage.

Climbing out of the hole

In the long term, the only way for Russia to keep growth on track is to improve output. The good news is that this should be surprisingly easy.

Most assume that low productivity is due to outdated factories, but Mr Idrisov says blaming old technology is a “myth” and the main problem is simply bad management.

This is supported by a recent report from McKinsey, which claims that 80pc of the productivity gap with the US is simply due to inefficient business administration. In other words, the changes companies need to make to massively boost their productivity are simple things that make better use of the resources they already have.

McKinsey also found that some sectors of the Russian economy are already on a par with international peers – particularly the steel sector. While issues remain in construction, retail banking and electricity production – in which productivity stands at between a fifth and a quarter of US levels – these sectors are still more productive than most of the economy.

It’s only once Russian management gets a grip on these issues that technology – the glamorous star of President Medvedev’s drive to modernisation – can start to play a proper role. At that point the traditional pillars of economic growth – capital and labour – will have the chance to feel the turbocharged benefits technology can offer.