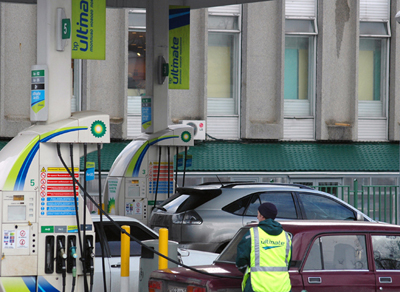 As BP sells off assets to  pay for oil spill damages  in the Gulf of Mexico, Russo-British joint venture TNK-BP is eager to buy them up as it looks to expand outside Russia.

The foreign expansion strategy backed by the Russian half of TNK-BP – the half that almost caused an irrevocable split between the two sides – is now back on the table, and assets BP is being forced to sell to raise cash could be used as the core for that international push.

In an interview in mid-September, TNK-BP’s interim executive chairman Mikhail Fridman said the Russian oil firm wants to grow internationally to a point at which no more than half of its production will come from Russia.

He added that the Russo-British joint venture is ready to buy assets from BP, and would be looking at the issue at the board level.

Fridman said that TNK-BP is interested in expanding its operations in Iraq, and that Alfa, Access/Renova group (AAR) – the Russian partnership that holds 50 percent of the joint-venture – is planning to sell its investment in the Kurdistan region of northern Iraq in order to clear the way for participating in deals in the rest of the country.

Fridman, who is Russia’s third-richest man and the head of Alfa Group – which holds interests ranging from banking to mobile phones to energy – said the Russian shareholders’ relationship with BP has changed since the flare-up in 2008, which went to the highest levels of the political elite and almost ended the partnership.

In the interview, Fridman reiterated the Russian partners’ position, that then-CEO Bob Dudley was running TNK-BP in the interests of BP rather than all the shareholders.

“We didn’t think we should be a branch of BP,” he said about the dispute, which was sparked by BP’s efforts to block any expansion by TNK-BP into international markets in which the British oil major was already operating.

The dispute, which led to Dudley and many of his expatriate staff being denied entry visas to Russia, ended when the two sides called a truce and agreed to establish a new board, with Fridman stepping in as acting chief. Dudley takes the helm at BP in October, following Tony Hayward's departure after the catastrophic oil spill in the Gulf of Mexico; the circle will be completed as Hayward arrives in Moscow to manage TNK-BP.

“TNK and BP had an intense dispute – but it’s over,” said Fridman, underlining who really won that spat by announcing the international strategy would now go ahead.

In an ironic twist, Fridman said the Russian firm is ready to base its foreign expansion on assets that BP is being forced to offload to pay for the clean-up in the Gulf of Mexico. BP is looking to sell $30 billion of oil and gas assets over the next 18 months, and Fridman suggests that, seeing as how TNK-BP is looking to expand abroad, BP “has no need to sell to a competitor.”

The TNK-BP board will consider the purchase of BP assets at the end of September, at a meeting that will be the first to include Hayward. Talks to buy assets in Venezuela and Vietnam are furthest along, TNK-BP’s chief financial officer, Jonathan Muir, said at a conference in mid-September.

In Venezuela, BP has stakes in the Petroperija and Boqueron oilfields, as well as the Petromonagas heavy oil-upgrading project, which produces 110,000 barrels of oil a day, according to BP’s website.

BP also plans to sell a stake valued at $1 billion in the Nam Con Son gas project in Vietnam.

Meanwhile, TNK-BP announced on Sept. 20 that it has signed a contract to supply crude oil blend to Vietnam, with the first cargo of 100,000 tons to be loaded at the Pacific Ocean port of Kozmino in November.

Maxim Barsky, deputy chairman of TNK-BP’s board, said in a company statement:   “We are committed to establishing a long-term presence in Vietnam and to pursuing joint projects in the upstream and refining sectors.”

The company is also looking at BP assets in North Africa, Muir said. BP holds production assets in Algeria and Egypt, as well as exploration acreage in Libya.

TNK-BP is not limiting its expansion strategy to international operations however, and Mr Muir said he wants to see the venture become the second-largest oil producer in Russia.

It currently sits behind state-controlled Rosneft and Lukoil in third place, producing 1.9 million barrels of oil equivalent per day, and contributes about a quarter of BP’s output and a fifth of its reserves.

It was announced on Sept. 20 that TNK-BP is one of five Russian majors that will bid for the giant Trebs and Titov Arctic field, which is estimated to hold 200 million tons of reserves, in the auction slated for Dec. 2, with a starting price of 18.2 billion rubles ($587 million).