What we don’t see from the opposite ends of Europe 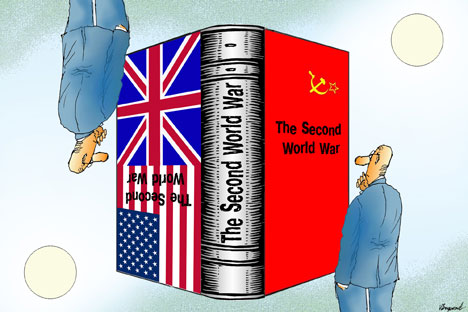 As a Russian translator of British poetry, it was hardly surprising that on my first visit to London I was so drawn to the bookshops, and in them to the shelves of classics (Chekhov in English translation winked at me) and the shelves of books about the Second World War. Or rather whole sections.

The British are interested in World War II – that was clear right away. Books about the Battles of Britain and El Alamein, about military operations in Italy and the Balkans, about the Normandy campaign and American engagements in the Pacific filled row upon row.

I looked for what I had known since childhood, for what was part of my heart – the battles for Moscow and Stalingrad, the defence of Leningrad – but could find almost nothing about the Eastern Front where some seven million soldiers were either killed or taken prisoner. The military triumphs of the Soviet Union existed in just one book (about the capture of Berlin) and then only in the context of actions by the Allies.

Of the 24 episodes in An Incomplete History of World War II by Edwin Kiester Jr, only one belonged to Russia.

I bought several books and began reading them. There was nothing about Russia in them, but Mike Brown’s Wartime Childhood inspired my respect for the well thought-out, strict and yet humane mobilisation of Britain’s civilian population. I thought of my grandmother who went to work in a factory when she was 11 years old.

In essence, it is hard to blame the Russians for calling the Second World War the Great Patriotic War. For the Soviet Union, which by early 1943 had lost around 1.25 million square miles of territory (home before the war to some 88 million people), this was indeed a patriotic war.

The peoples of Europe were united then. But the war ended, and the Allies’ paths diverged. Soviet historiography preferred to dispense with the concept of the Second World War in favour of that of the Great Patriotic War; it gave short shrift to heroic chapters in the principal battles for Britain and campaigns in North Africa; it underestimated the significance of military actions in the Pacific and belittled the significance of lend-lease.

For his part, Churchill, in his six-volume work The Second World War , devotes only a paragraph to the battle of Kursk – one of the two largest tank battles in history – and expresses the fear that the Russians may have the “unjustified feeling” that the palm in the victory over Nazism belongs to them.

It is hard to say to what extent that feeling was “unjustified”, but among the Soviet people, who lost more than nine million soldiers (26 million citizens all told, including civilians) in the war, that feeling certainly did arise. In the whole vast country there wasn’t one family unscathed by the war. It was indeed a holy war. For decades the subject of the victory was the main subject of literature and film. These featured the official version of history and reminiscences by front-line soldiers – beginning with the memoirs of Marshal Georgy Zhukov, who candidly described serious errors made by the Soviet high command that had cost hundreds of thousands of lives.

Even so, the truth discovered in the archives after the collapse of the Soviet Union was stunning. The number of victims was even greater than that conventionally accepted, while the subject of heroism, even tragic heroism, was replaced by the horror before the catastrophe. People began to ask: “Was it worth paying such a price?” The works of Russian historians were increasingly devoted to discussions of Stalin’s mistakes and crimes. The significance of the Soviet people’s great feat foundered in this sea of disclosures.

That may be why confirmation from other nations is so important to Russians.

In Russian bookshops, whole shelves are taken up with the reminiscences of Wehrmacht and SS soldiers who fought on the Eastern Front. There are also a number of books by Western European and American historians, such as David Glantz, Paul Carell, Andrew Nagorski, François de Lannoy and Christopher Ailsby. They often see the battles for Moscow, of Stalingrad or Kursk as the turning point in the Second World War. Russian stores also have books about the actions of British and American forces – the Gelb operation, battles in North Africa, engagements with German submarines. It has to be admitted that today’s Russian reader is almost entirely dependent on Western historians for information about these actions. Russian writers are evidently far less interested in them.

I was surprised and touched when I found in volume nine of The Second World War: An Illustrated History , edited by Sir John Hammerton, a photograph of a Red Army soldier laying a wreath at a statue of Johann Strauss.

But this magnificently published 800-page tome said almost nothing about the liberation of Vienna by Soviet soldiers, while the liberation of Prague was not mentioned at all. A substantial part of it told of engagements with Japan, without somehow mentioning the Soviet Union. Yet the Russians entered the war against Japan in accordance with the decision of the Yalta Conference and they routed most of Japan’s land forces – the million-man Kuantan army. An uncle of mine took part in those battles.

A famous Soviet film about the war features a song written by the poet (and front-line soldier) Bulat Okudzhava:

The planet is burning and spinning,
Smoke hangs over our Motherland,
That means we need one Victory,
One for all, no matter the cost.

Indeed, the Soviet people did not consider the cost. And the victory was one for all. In September we celebrate the end of our common war, the anniversary of our common victory – possibly the civilised world’s greatest reason to be proud.