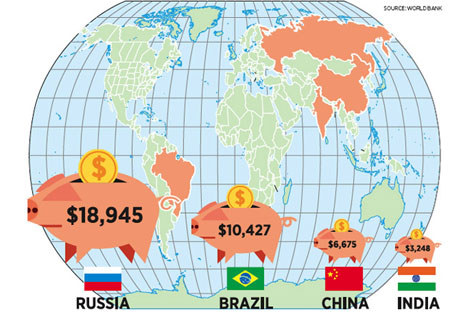 Despite a poor reputation, Russia’s economic indicators are among the most favourable when compared to those of its Bric peers.

Only a year ago, commentators were calling for the “R” in Bric (Brazil, Russia, India, China) to be removed after the global economic crisis hit Russia particularly hard. But now the economy has bounced back, the mood has turned and some are asking whether Russia is actually the best of the bunch.

The difference boils down to a question of quality over quantity. Most of the international investor focus is on China simply because it has a population of 1.3 billion: if a company can sell a widget in China, it will sell hundreds of millions of them. But a report from Russian investment bank Troika Dialog in August argued that Russia is, in fact, a better bet than either China or India.

“We are often subject to tirades about the supposed weaknesses of the Russian market, usually ending in the tired argument that Russia should not be part of Bric,” says Kingsmill Bond, head of strategy at Troika and author of the report.

In terms of GDP per capita, Russia is far ahead of its Bric counterparts

Mr Bond admits that Russia does have its weaknesses, but most of its advantages are usually overlooked. The most obvious is that the country is replete with every conceivable mineral resource – not just oil and gas. “The emerging market story is one of superior growth contrasting with the genteel decline of the West,” says Mr Bond. “As the world’s main storehouse of raw materials, this transformation is not possible without Russia.”

Less acknowledged is the importance of the Russian people. With a population of 142 million, Russia is by far the most populous country in Europe, and because it’s still in transition, consumer goods are in high demand.

These consumers are relatively well off: thanks to a decade of strong economic growth, Russia’s per capita income (adjusted for purchasing power) is $18,945, compared with $10,427 in Brazil, $6,675 in China and $3,248 in India. Russia may have fewer people, but those it does have are the richest of all the Bric nations – twice as well off as the average Chinese and five times better off than the average Indian.

Moreover, Bond suggests that 68pc of the Russian population can be counted as middle class (approximately 100 million people), against 31pc in Brazil (75 million), 13pc in China (160 million) and less than 3pc in India (30 million). In terms of who has the biggest shopping public, China obviously wins, but the gap with Russia is actually fairly small.

Differences in the social standing of the populations also explain the difference in the rates of growth between so-called Chindia (China-India) of 8-10pc and Russia at 4-6pc. Russia is already a sophisticated, industrialised society with a well-educated, cultured population, whereas China and India have only just set out on the path to create that sort of society.

The growing wealth of the Russian population is already apparent in the automotive sector. Car ownership in Russia is 231 per 1,000 people, half that of Western Europe but five times more than in China. Moreover, the average age of cars on Russian roads is 11.5 years, against the Western European average of 8.5. This means that not only will the market double in size as it converges with the West, but it will grow even faster, as owners have to replace existing cars sooner than their peers in the West. “Russia has huge potential for an increase in car ownership per capita as disposable income grows,” says Tom Mundy, strategist at Renaissance Capital. “And 2010 is already looking to be a good year for auto sales, despite being a long way off pre-crisis levels.”

Russian stocks are also increasingly appealing to portfolio investors, as the Russian stock market is now the cheapest major market in the world. Price/earnings ratios in developed markets are typically in the early teens, but Russia’s companies are trading well below the norm at a ratio of 7x, whereas those of India, Brazil and China are well above it at multiples of 21x, 15x and 14x respectively. “When I talk to investors in London, I always tell them to invest into Russia first,” says Danny Corrigan, head of global securities at ING. “Russia has a lot of horrible problems, but the economy is open to foreign investors, whereas the barriers to doing business in communist-controlled China are very high and the Indians simply preclude foreigners from many sectors.”

Mr Bond argues that despite Russia’s poor image, it actually compares favourably with the other Bric countries in terms of how easy it is to do business, and that the country’s poor image is as much due to sentiment as real problems. “Contrary to popular belief, Russia compares well with its peers on metrics like ease of doing business, market size, transparency, infrastructure, health, crime, return on equity, dividend yield, the Gini coefficient and a number of other parameters,” he says. “There is no universally accepted definition of what it takes to be an attractive market, and this is perhaps why so much anti-Russian propaganda finds its way into investment analysis.”