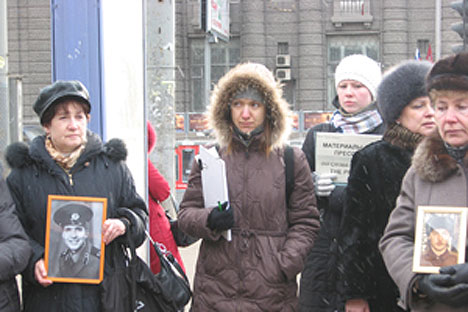 The Mothers’ Right foundation, which provides legal support for parents whose sons have died in the Russian army, has existed since 1989. Every year the charity registers an average of 5,000 called, and during its time in operation, it has helped more than 80,000 families. The victories of the charity’s unpaid lawyers are setting precedents that are changing Russian legal practice.

But in 1989, the foundation’s leaders didn’t even have an office; the charity was based at the home of chairwoman Veronica Marchenko. In 1992, Mothers’ Right set up camp in the same room as three other NGOs and, but two years later the charity had the office to itself. At the end of 1994, the foundation’s organizers met Kirill Ermishin. He had been working with Swiss NGOs that were supporting human rights organizations.

He said, “Why don’t you apply for a grant?” recalled Veronica Marchenko. “We asked ‘and what is a grant?’ We wrote two lists for stationary and salaries and we received a sum that paid the secretary a salary of $30, and the accountant $50. Our first grant was from the Swiss Association “Liberty Road.”

In 1996, branches of the Soros and Ford Foundations opened in Moscow. “They noticed us, because we worked hard. We weren’t looking for them, but its good they found us. We could have operated without them, but their help has enabled us to do great things,” said Marchenko.

Since 1995 the charity has published the Mothers’ Right newsletter. Copies are printed and distributed by subscription to NGOs across Russia. The low circulation—only 750 copies are printed—means that the newspaper doesn’t have to be registered as part of the media. Most subscribers make copies of the newsletter, however, which increases the circulation fourfold. The newsletter explains legislative intricacies and reports the charity’s victories. These are legal precedents that could be useful to parents who are trying to establish the reasons behind their sons’ deaths and to obtain the compensation to which they are lawfully entitled. Mothers’ Right also prints handbooks that provide a detailed version the legal rights of parents of deceased soldiers. The charity regularly distributes these not only to parents, but also to the federal courts of Russia, military enlistment offices, and other NGOs. Each handbook has a circulation of 10,000 copies.

But the distribution of these newsletters and the provision of free legal representation in court for the parents of deceased soldiers both require money. At present, Mothers’ Right does not receive financial support form the government, either from the Public Chamber or in the form of a presidential grant. The US Embassy in Russia gave the foundation a small grant to cover stamps and envelopes to distribute the “Lawyers Council” handbook throughout the federal courts and commercial organizations also help out. For instance, Russian Railways and various airlines provide free tickets for lawyers representing parents of deceased soldiers in court. Additionally, the proportion of private donations is growing, and today it makes up more than 10 percent of the charity’s funds. Donations increased after Veronika Marchenko was nominated for the
2009 Women of Courage Award, first from Russia, and then from Europe. The awards were presented by American First Lady Michelle Obama and U.S. Secretary of State Hillary Clinton.

“We were shown live on CNN, the ceremony was very festive and enjoyable; after it ended the Americans said, ‘you should come again, while the ceremony was on air, your donations went right up!’” said Marchenko.

In 2005 the Russian government finally took on the task of providing free legal aid to disadvantaged citizens to defend their constitutional rights. The so-called “Experiment for the Creation of a State System for the Provision of Legal Aid to Low-Income Citizens,” which to this day exists in the form of an “experiment,” is prolonged every year. In Marchenko’s opinion, this project should be seen as a step in the right direction, even in its current “raw” form.

Yet another result of the charity’s actions has been a reduction in the instances of regional law-enforcement contradicting federal legislation. Russia is a country with a heterogeneous territorial division, and there were often cases where pension funds in the regions have tried to save money on the deceased and refused to pay out the compensation to which bereaved families are entitled by federal law. However, cases such as these are the easiest for Mothers’ Right lawyers to contend with, and today they have dramatically decreased in number.

“There is a much bigger problem when one federal law contradicts another federal law. There are no courts where you can appeal against this,” said Marchenko. But she is more upset that there is no significant reduction of crime in the army. The charity still has a lot of work to do.

In 1997, Mothers’ Right launched a website, which includes an English language version. In 2009, work began on a German-language version of the site. The site describes the charity’s activities, the tragic deaths of soldiers in the modern Russian army, the charity’s victories—which always protect someone’s memory and sometimes assure the material wellbeing of the bereaved family—and an insight into the reasons behind each misfortune, since sadly misfortune can strike even the most just and noble.

For more information about Mothers' Right, visit their website, http://mright.hro.org/eng