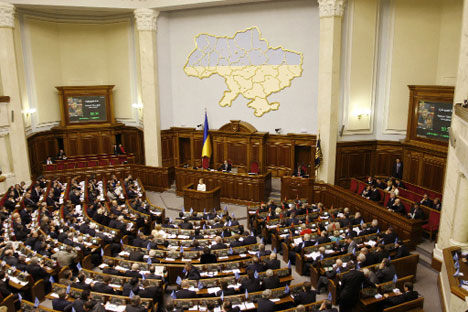 There has been wide agreement among Ukraine's politicians and experts for some time that the country's constitution needed changing. But after the Constitutional Court on Friday, October 1 cancelled reforms passed in 2004, thereby returning important powers to President Viktor Yanukovych, the question is whether this is the change that was needed.

There's no doubt that it will bring more clarity to the division of power and the decision-making process, which contributed to the political infighting that plagued the ruling years of former president Viktor Yushchenko and ex-prime minister Yulia Tymoshenko. The perpetual stand-off between the two leaders of the Orange Revolution severely hampered the government's response to the economic crisis of the past two years, which wiped 15% off the economy in 2009. But taken as part of Yanukovych's increasingly tight grip on power, the move can be seen as a further step toward authoritarian rule. In typically sharp language, now opposition leader Tymoshenko said the changes made Yanukovych a "dictator."

This is a key moment now for Yanukovych. Despite controlling the presidency and having a loyal coalition, he claims he needs these greater powers to push through much-needed reforms. Business now eagerly awaits a flood of much-needed overhauls to revive the stagnant economy, cut the stifling bureaucracy and root out the endemic corruption. Otherwise, it will be clear that the boost to his powers had another motive – the preservation and strengthening of his power.

In his seven months as president, Yanukovych has already shown a desire to play with the rules, not by the rules.

The two biggest decisions of his presidency so far have shown scant regard for the constitution. In March, his allies formed a coalition with a majority of lawmakers in the 450-seat parliament, despite the constitution stating that coalitions are formed by parliamentary factions, not individual lawmakers. Then in April, he signed a deal for Ukraine to receive cheaper gas from Russia in return for extending the stay of the Black Sea Fleet in Crimea until 2042. The constitution rules out the stationing of foreign military bases on Ukraine's territory.

The opposition says it is being intimidated and former officials from Tymoshenko's government are jailed and under investigation; the media complains of increased censorship; critics claim a new local election law favours the pro-presidential Party of Regions. The list goes on.

The president and his allies continue to deny all these allegations, but there's certainly a whole lot of smoke if there's no fire.

Ukraine could certainly use some tough economic decision-making; promised reforms have been slow in materializing. It is relying on a $15bn loan from the International Monetary Fund to prop up its finances. The government will need strong political will to stick to the programme's conditions in order to secure further loans, including further controversial increases in household gas prices.

Yet Yanukovych's popularity rating has been sliding in recent months as the euphoric hopes of his election victory and generous promises have faded into a reality of more of the same. Thus the urge will be to maintain power by further sidelining the opposition and dominating the airwaves. In short, following the path of Russian Prime Minister Vladimir Putin when he centralized power after becoming president in 2000.

This political culture is, of course, traditional for Ukraine. For years, preserving and increasing power was the driving factor in political and economic decision-making. (Or decreasing your opponent's power, as when Yanukovych's allies in 2004 pushed through the very constitutional changes that were just repealed to weaken then soon-to-be President Yushchenko.)

Depressingly for citizens and investors, these powers are not given by public consent, but in closed-door meetings. Take the Constitutional Court's decision: it was arrived at just a few weeks after four judges were allegedly forced to quit and were replaced. As with many other recent critical decisions, there was no public discussion of what constitutional changes were needed. The court's decision even avoided debate in parliament by simply declaring the 2004 reforms invalid, and that therefore the 1996 constitution was in force. Ukrainians now have a president and a parliament with different powers than those held when they voted for them.

Some analysts are predicting a contentious few weeks ahead, as laws have to be brought in line with the 1996 constitution by a parliament just stripped of some of its powers. But there have so far been few signs of dissent, other than Tymoshenko's rhetoric.

As for the consequences of the decision – whether positive or negative – we'll have to wait to see how Yanukovych uses his new powers to appoint and dismiss his prime minister and cabinet of ministers and cancel government resolutions as he sees fit.

Did he push for the increased powers to reform the economy or to maintain his and strengthen his position for its own sake? We can only live in hope that it's the former, but the signs would seem to point to the latter.