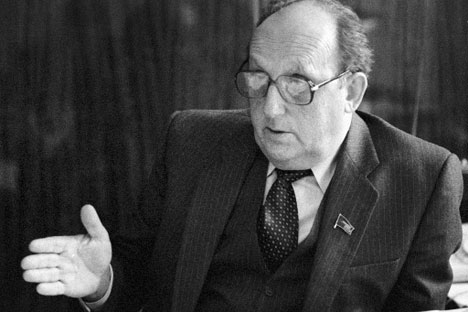 Georgy Arbatov, adviser to Soviet leader Leonid Brezhnev, who believed that cooperation between the United States and the Soviet Union was possible, died on Oct. 1 at the age of 87. He was a master of compromise who sought to introduce a touch of human rationality to the totalitarian system.

Arbatov was director of the Institute of United States and Canada Studies from 1967 to 1995. He paid many visits to the United States and saw grounds for cooperation, recognizing the absurdity and artificiality of each side’s claims against the other, and the endemic suspicion that hindered any such cooperation.

The standoff between the Soviet Union and the United states, which was to a great extent contrived by bureaucrats or orchestrated by Russophobes and Anti-Americans in each country, appears particularly absurd against the backdrop of the Cold War threat of a nuclear conflagration and the subsequent terrorist attacks that have, in recent decades, claimed thousands of lives.

These contrived positions rolled back in the face of real danger. In the 1970s they were replaced with détente after a long drawn-out arms race, the 9/11 tragedy in the United States was followed by cooperation in Afghanistan and the list goes on. The détente of the 1970s was Arbatov’s moment of glory and one of the main achievements in his career.

Arbatov was born in 1923 and took part in the Nov. 7, 1941 military parade in Red Square, after which the troops went straight to the front to fight the Nazi invaders. His was one of the most deprived generations in Soviet history, having witnessed the cultural and economic devastation of the country as a result of the civil war , the subsequent collectivization period, World War II—which only 3 percent of his peers survived, the difficult years of post-war recovery, and the period of the Brezhnev stagnation.
While in hospital suffering from tuberculosis in 1944, Arbatov read a newspaper report mentioning that a state institute of international relations (MGIMO) was being established in Moscow. His fate was sealed: He decided that he simply had to enroll at the institute, which after all, promised to open up the world to him.

After graduating from MGIMO he worked for the Kommunist magazine and the English-language magazine New Times. Otto Kuusinen, a Finnish-born Soviet politician who hoped to become president of Finland once the Soviet Union had won the ill-fated Winter War of 1939-1940 and who led the international communist movement after World War II, noticed this talented young journalist. By the time Leonid Brezhnev came to power in 1964, Georgy Arbatov was a 40-year old highly respected intellectual with frontline experience, who spoke fluent English and had an open mind.

The language of U.S. political life, which crept into dissertations and subsequently newspapers thanks to Arbatov's work at the Institute of the United Sates and Canada, was changing the Soviet Union and preparing it for democratic reform. Arbatov addressed the country’s practical problems such as the need to cut military spending, balance internal and external stability, and improve relations with the United States and West European countries.

This was a language that Soviet leaders understood and, happily, there came a day when the pragmatic Nixon administration also started speaking the same language. The results were the détente of the mid-1970s and the Helsinki Accords. Détente had breathed its last by the end of the 1970s. The octogenarian Soviet leaders, who had long since forgotten all about pragmatism, instead becoming ever more paranoid about security, approved the invasion of Afghanistan to preempt the alleged deployment of U.S. troops there.

Arbatov was pushed back into the shadows, only reappearing during Gorbachev’s perestroika.
In the 1990s, Arbatov had to fight another aspect of excess in Russia’s politics: the radical reform program. He criticized the idea of Russia’s “accelerated Americanization” proposed by Yegor Gaidar and Anatoly Chubais, who suggested importing foreign managers instead of training Russian ones.
Indeed, it is much simpler to wave a magic wand and wish to “have everything they have” than to work hard to find rational solutions to problems and train local managers.

Under Arbatov, American studies in Russia became a science, and science does not accept simple solutions without explanation, instead demanding that they are tested in practice before being applied. This was one of Georgy Arbatov’s main achievements.