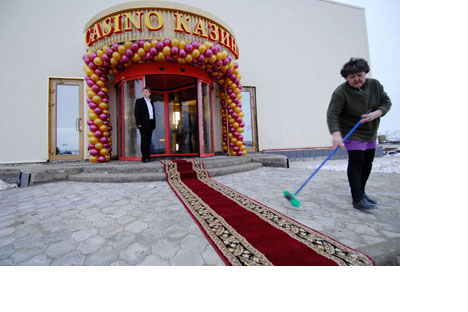 Glonass has soaked up some $2 billion in investment during the last 10 years of its development, and Russian satellite scientists believe Glonass stands fair chances to become a world leader.

With three more satellites launched in September, Glonass will be fully operational by the end of this year.

“It’s high time Glonass developed its potential, as US satellites have been around the orbit for a long time and are getting worn out while the European Galileo and Chinese Beidou projects are not launched yet,” said Alexei Smyatskih, managing director of M2M Telematica, which produces GPS and GPS-Glonass navigation systems.

For now the Russian positioning system is mostly used by municipal organisations and state-owned companies.

M2M Telematica, one of the main local producers of GPS and GPS-Glonass navigation systems, claims that the dual system achieved a 70 per cent share of all Russian corporate sales this year. For now its main customers are state-run energy and transport companies, municipal emergency vehicles.

Glonass will soon go on sale to a wider public, and the system is set to make a profit from 2013, when the devices will appear on the mass market, said Deputy Prime Minister Sergei Ivanov, speaking at the recent Sochi Economic Forum.

The first Glonass-compatible mobile phones, cars and other appliances will appear on the market by the end of 2012, when 48 billion roubles will have been invested in the system, Ivanov said.

The government plans to give Glonass an advantage by slapping a 20-25 per cent duty on GPS-only navigators.
In July, Vladimir Yevtushenkov, the owner of AFK Sistema, which produces Glonass devices on its two high-tech subsidiaries – Sitronics and RTI Systemy – proposed a total ban on import of devices without Glonass, including well-known cellphone brands.

“Foreign producers will install Glonass in their devices … anyway, but local producers should be protected here,” said Alexandr Zubahin, a spokesman for Russian Cosmic Systems. “We don’t yet produce LCD here, that’s why GPS-Glonass navigators will be more expensive than GPS ones.”

Smyatskih, of M2M Telematica, said the Glonass-GPS dual device would help Glonass in entering foreign markets, “so everyone wins.”

However, some experts say the Glonass technology has not yet been perfected. “They shouldn’t bar the GPS navigator from the market, until the whole range of devices using Glonass are produced. Now, from the consumer’s point of view, Glonass systems are not perfect as they lag behind in [functions],” said Georgiy Shulgin, head of navigation systems at Navis, a Russian manufacturer.

But experts say Russia’s political clout will help Glonass spread around the world.

“India, China, the Middle East and South America [would like to be] independent from the U.S.-led GPS, and China and India are working on launching their own positioning satellite networks already,” said Smyatskih. “For now, Glonass will be popular with all of them.”

At this year’s Shanghai Expo, China’s ZTE and its Russian partner, Sistema, unveiled the first navigation device using both GPS and Glonass technologies, along with Galileo and Beidou receivers.

“Two-system receivers will be soon the trend globally, as they are definitely more precise, and for consumers the quality of the navigator is the only thing that matters,” said Georgy Shulgin, of Navis.

Recently Vladimir Putin has backed the idea of installing Glonass systems on all Russian-made cars. The device will automatically inform ambulance and other emergency services about car accidents.