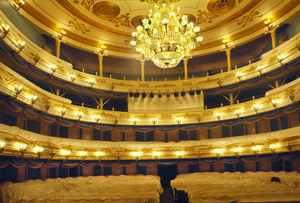 For a dramatic natural setting, few Russian cities can rival the Siberian metropolis of Irkutsk. Located on the banks of the Angara River (a tributary of the Yenisei), Irkutsk is a major point on the Trans-Siberian railway and the gateway to sacred Lake Baikal, the deepest body of fresh water in the world. Because of its favorable geographic location, Irkutsk has attracted the resources to create a remarkable ensemble of historic architecture.

Russian settlements existed in the Irkutsk area from the early part of the 17th century. In 1661, a log fort was eventually constructed at the confluence of the Angara and Irkut Rivers. The original purpose of the settlement was to establish Russian authority with the region's aboriginal Buryats. In 1686, Irkutsk gained the status of a town, and shortly thereafter began sending caravans to China, which became a source of trade and cultural influence for the city.

By the beginning of the 18th century, Irkutsk was becoming the administrative and commercial center of a vast territory in central and eastern Siberia. Its importance was reflected in a number of large masonry churches, profusely decorated in forms that combined Russian and Ukrainian influences with Asian motifs. The pioneering culture of the Russian north—towns such as Vologda, Totma, Veliky Ustiug, and Solvychegodsk—also provided inspiration as well as master builders for the churches of Irkutsk. Early 18th-century monuments include the Church of the Miraculous Icon of the Savior, with its distinctive exterior frescoes, and the brightly painted Cathedral of the Epiphany, began in 1718 and the expanded over the course of a century.

By the middle of the 18th century, Irkutsk advanced to a new level of commercial importance. The majority of the city’s population was involved in entrepreneurial activity of one form or another, and its merchants assumed an increasingly important role in guiding the city in the absence of an established local nobility. This surge of economic vitality gave rise to a rich urban silhouette created by the vertical accents of church cupolas and towers.

The most remarkable of these new buildings is the Church of the Elevation of the Cross (also known as the Trinity), built between 1747 and 1760 on the Hill of the Cross. From the bell tower and steeple over the west end to its panoply of Ukrainian-style domes over the main structure in the east, this church remains to this day a dominant presence in the southern part of historic Irkutsk . Its design displays not only the influence of central Russian and Ukrainian church architecture, but also the building traditions of the Russian north and the Urals. Furthermore, its stylistic range extends to Asian sources as revealed in the facade ornamentation, which has been carefully restored. Of particular note are intricate stupa-like forms in terra cotta framing the north and south portals. It is likely that the active trade between Irkutsk and China played a role in this cross-cultural work of art.

Irkutsk also had churches in the neoclassical style, yet its most refined example of neoclassical architecture is the imposing mansion built for Ksenofont Sibiryakov, a merchant who had successfully tapped the great wealth of Siberia and its fur trade. The mansion, now used as the central building of Irkutsk University, can be compared with mansions built in Moscow during the same period.

Until the 20th century, housing in Irkutsk was largely made of wood. Among the earliest surviving examples of wooden houses are those belonging to Sergei Trubetskoi (1790-1860) and Sergei Volkonsky (1788-1865), members of the noble elite who were exiled to Siberia for their role in an uprising against tsarist authority in December 1825. Later examples of wooden houses in Irkutsk show a more ornate “merchant style” with elaborately carved decorations comparable to examples in other Siberian cities, such as Tomsk and Chita.

A catastrophic fire in 1879 destroyed much of Irkutsk, including masonry buildings as well as wooden houses. Nonetheless, the town soon rebounded on the strength of gold mining and growing trade, both domestic and foreign. Like other Siberian cities, Irkutsk in the late 19th century was of town of various faiths. While the local Catholic parish was rebuilding the Church of the Assumption in the early 1880s, Irkutsk gained a new synagogue, built in 1881-82 by Vladislav Kudelsky. The Muslim population of Irkutsk also has its place of worship, constructed at the turn of the 20th century. During this period, Irkutsk was transformed by an eclectic array of office buildings, hotels, banks, and theaters. The most impressive public structure in Irkutsk at the end of the 19th century was the City Theater, built in 1894-97 and splendidly restored a century later.  These major buildings reflect an economic stimulus created in part by the construction of the Trans-Siberian Railroad.

As elsewhere in Siberia, these promising developments were shattered after 1914 by seven years of conflict, including fighting among various Red and White factions during the Russian Civil War. Today, the central part of Irkutsk (population around 600,000) has preserved much of the ambiance created during the commercial and building expansion at the beginning of the 20th century. Although many churches were destroyed or damaged during the Soviet period, those remaining are being carefully restored. As one of the leading cultural, educational, and industrial centers of eastern Siberia, as well as the gateway to Lake Baikal, Irkutsk has ample reason to protect the rich cultural legacy of its historic architecture.