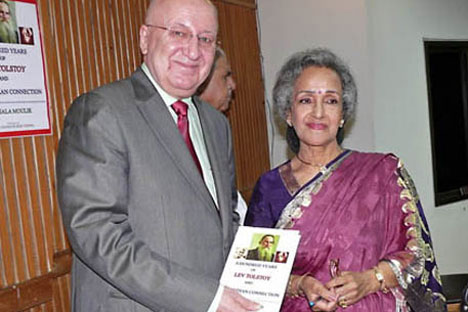 Book on Lev Tolstoy by Achala Moulik released by Russian Ambassador.Photo by RCSC

“A Hundred Years of Lev Tolstoy & The Indian Connection” by Ms. Achala Moulik, I.A.S.(Retd.), Former Education Secretary, Government of India, was released by H. E. Mr. Alexander M. Kadakin, Ambassador of the Russian Federation to India, at the India International Centre on September 27.

The solemn ceremony was organized to commemorate the 100th death anniversary of Lev Tolstoy. The function, attended by an elite gathering of diplomats, educationists, media men, academics, artists, and others, was held under the joint auspices of Har-Anand Publications Pvt. Ltd., Embassy of the Russian Federation in India and the Russian Centre of Science and Culture.

Releasing the book, H.E. Mr. Alexander M. Kadakin, Ambassador of the Russian Federation to India, said that Tolstoy's greatness as a thinker, social activist and enlightener lies in the ideas expounded in his literary and epistolary oeuvre. His interaction with Mahatma Gandhi is of crucial importance, with India's great son considered one of ideological successors of Leo Tolstoy, he pointed out.

The author describes with deep understanding and empathy the major events of Tolstoy's life, his family, friends, home, interests, escapades and even his eccentricities. She narrates Tolstoy's story set against the vivid panorama of Russian culture and events and each of his masterpieces is lucidly described and analyzed along with the literary, social and political impulses that shaped these novels. Tolstoy championed the cause of the oppressed, both in Russia and in other countries. He encouraged Gandhiji to fight apartheid in South Africa and British rule in India through non-violent resistance to evil. The unique political strategy practiced by him has been adopted by other nations struggling against injustice and foreign rule.

Ms. Achala Maulik was Director-General of the Archaeological Survey of India and Education Secretary to the Government of India. She is also a cultural historian, novelist, poet, playwright and author of 22 books. Her play “Pushkin's Last Poem” was performed in Moscow and St. Petersburg during the “Year of India in Russia”. Russian history and Russian literature are two of her major interests.

Thanking profusely the Russian Ambassador in his generous gesture in releasing her book, the author Ms. Achala Maulik described as to how she was deeply inspired by the classics of distinguished Russian writers, novelists and poets, particularly the magnificent literary giants such as Pushkin, Tolstoy and others from her childhood days. She referred to the historic correspondence between Lev Tolstoy and Mahatma Gandhi, two great pillars of humanist philosophy. The author cited the remarkable inspiration Gandhiji drew from Lev Tolstoy as an important milestone in world history.