Russia picks up the China card 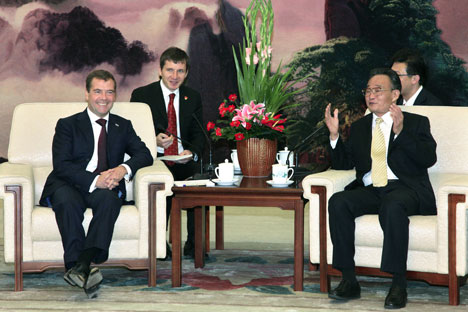 Long gone are the times when aged and frail denizens of the Kremlin would go on a foreign trip only on special occasions: to sign a strategic arms control treaty or to visit with fellow septuagenarians in the so-called fraternal socialist countries.

These days, Russia’s young, youthful and fit leaders travel abroad non-stop. However, it’s not arms control negotiations, much less “ideology,” that is driving them. It’s all about business. Usually accompanied by a bunch of prominent businesspeople, Russian top guns relentlessly tour the world to advance Russia’s economic interests.

President Dmitry Medvedev’s three-day trip to China last week was no exception: Out of 15 documents signed by the two countries, 12 dealt with different aspects of Russia-China economic cooperation. The visit itself pointedly ended with Medvedev and his Chinese counterpart, Hu Jintao, presiding over the opening of a 625-mile oil pipeline from Eastern Siberia to China.

Does this mean that the visit was devoid of any geopolitical overtones? Certainly not. It coincided with a moment when China’s relations with some countries are turning edgy. A minor collision of a Chinese fishing boat with Japanese patrol ships has elevated to an ugly shouting match between Beijing and Tokyo. China’s dispute with the United States over the undervalued yuan keeps heating up. And should the U.S. Congress adopt legislation threatening to bloc Chinese imports, a bona fide economic war between China and the U.S. may well erupt. Against this background, the deliberately warm, problem-free, tenor of Medvedev’s interactions with Chinese leaders could not but send an unmistakable message to the whole world: In Russia, China has a long-term, faithful, and understanding friend.

It is so tempting to compare Medvedev’s visit to China to his summer trip to the United States. True, President Hu did not treat Medvedev to lunch in a popular fast-food joint, but they signed a joint declaration in which the words “strategic partnership” were almost as common as commas and prepositions. In contrast, in the United States, analysts still struggle to find a proper term to characterize U.S.-Russia relations; options oscillate between the bold “selective cooperation” and more cautious “engagement.” Although Medvedev did begin his U.S. trip with a stop in Silicon Valley, his Chinese itinerary was more diversified, including meetings with people from all walks of life. Speaking with students and the staff at the Dalian Institute of Foreign Languages, Medvedev said: “China is very close to me…I feel comfortable here.” Does anyone remember Medvedev saying anything similar about America?

Medvedev hardly tried to play the proverbial China card against his friend Barack Obama, but this card will certainly be played against him at home. It’s not a secret that a large and influential faction of Russian political elites is actively pushing for more close cooperation with China. This “China party” is likely to use the success of Medvedev’s trip as a vindication of their views. With the “reset” in U.S.-Russia relations limping along, the supporters of Russia’s pro-Western orientation with have little to brag about in response.

Even if playing card games isn’t a favorite pastime at the White House, Obama’s foreign policy team ought to pay close attention to the Moscow-Beijing romance. It should also take a note that while staying in China, Medvedev received a message from French President Nicolas Sarkozy: Sarkozy invited Medvedev and German Chancellor Angela Merkel to come to France in October to chat “about security.” All things considered, President Obama and his advisors will be wise to realize that the directions of Russia’s foreign policy are not fixed and that Russia is keeping its options open.