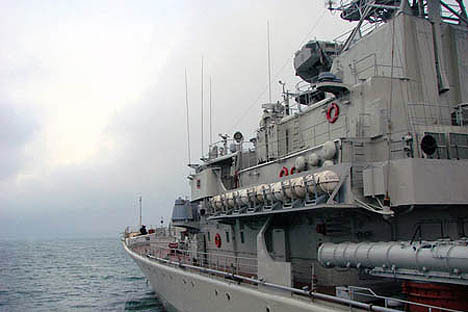 Russia is ready to restore its naval base in Cam Ranh, Vietnam, where our military ships, submarines (including nuclear), and aircraft (including long-range strategic), were deployed, since Soviet times, free of charge.

The base had existed for 31 years, since 1979. This time, the geopolitically important facility will be rented from Vietnam for 25 years, after which the lease may be renewed. A source in the Defense Ministry told Nezavisimaya Gazeta (NG) that the agreement may be signed in time of President Dmitry Medvedev’s visit to Vietnam, scheduled for late October.

The information, provided by NG’s source from the Defense Ministry, is indirectly confirmed by an Interfax report, in which a source from the General Staff of the Navy said that “the Main Command has completed the preparation of documents, which substantiate and calculate the necessity of rebuilding the naval base for Russian ships in the Asia-Pacific region”. Meanwhile, it is stressed that “if a political decision is made, then the Navy is ready to make the base operational within three years”.

Looking back at the recent history, the decision of early termination of stay of the Russian Navy and the Air Force in Cam Ranh was made by then-President Vladimir Putin. In a February, 2002 interview with the Wall Street Journal, he had argued that Russia’s decision to leave the base in Cam Ranh is an “absolutely correct” and “balanced military and political decision”.

“These are not arbitrary decisions of a single person,” stressed Putin. “These are well-considered military and political decisions, based in the realities and opinions of not only politicians, but also the military personnel, first and for most of the General Staff.”

General-Colonel Leonid Ivashov, who at that time headed the Main Directorate for International Military Cooperation (GUMVS) under the Ministry of Defense, told NG that the proposal to close the base in Cam Ranh and the intelligence and technical center in Cuba was personally made to Vladimir Putin by the former head of the General Staff, Anatoly Kvashnin. Many experts, however – especially in the Main Command of the Navy, the GUMVS, and Defense Minister Igor Sergeev (who served as defense minister since 2001) – had objected to the idea.

NG’s interlocutor recalled that he had, for several years, taken part in negotiations and consultations with the Vietnamese side regarding the future of the base in Cam Ranh and “the Vietnamese were against our withdrawal from the county; though they did demand rental fees”. According to Ivashov, the suggested fees were relatively small (about $300 million annually) and it could have been written off as Russia’s debt to Vietnam, which according to Moscow’s estimates, amounted to $10 billion. “But, apparently under America’s pressure, the former Russian leadership had made an absolutely arbitrary decision to withdraw from Vietnam. If we are able to, again, secure our military presence in the country, it is likely to be a major geopolitical victory for Russia,” says the general.

After Russia withdrew from Cam Ranh, proposals to establish a naval presence on the base were made by China and the United States. They were ready to pay $500 million for rent. But, Hanoi refused. It was officially announced that Cam Ranh will not be a foreign base.

Director of the Center for Analysis of Global Arms Trade, Igor Korotchenko, told NG that Russia and Vietnam have signed contracts worth over one billion dollars in the military and technical spheres. The expert does not exclude the possibility that some of the arms, which are being supplied to Vietnam, will be concentrated in the Bay of Cam Ranh: “A joint base for the Vietnamese Navy as well as the Russian ships and submarines in Cam Ranh is a highly possible option”.

Vladimir Komoedov, a State Duma deputy and former commander of the Black Sea Fleet, is concerned about the possibility that there may not be anything to deploy in Cam Ranh. “The Pacific Fleet, whose ships are supposed to monitor the waters of South-East Asia, has, for nearly two decades, not been supplied with new military equipment. So, what will we deploy in Cam Ranh?” asks the admiral. According to Komoedov, the new 2020 arms program does not provision the construction of aircraft carriers, which had, at one time, protected the geopolitical interests of the USSR in the Indian and Pacific Oceans.

The naval base of the USSR and Russia in Cam Ranh
The Cam Ranh Bay is one of the best deep-water bays in the world. Its total area is 60 square kilometers, and its depth reaches 20 meters. The bay is protected from the wind by the mountains. Since the 1950s, Cam Ranh was one of the most important bases for the US Seventh Fleet, especially during the Vietnam War from 1964-1973. There, US engineers had constructed a military airfield and a port. In 1972, due to America’s gradual withdrawal from South Vietnam, all military facilities in Cam Ranh were transferred to the South Vietnamese Army. On April 3, 1975, during an all-out offensive on Saigon, the Cam Ranh base was captured by the North Vietnamese Army. In 1979, after the brief war between Vietnam and China, the USSR and Vietnam signed a 25-year agreement.