Blue Noses: Still crazy after all these years 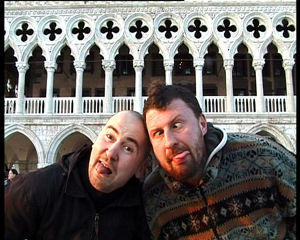 Vyacheslav (Slava) Mizin and Alexander (Sasha) Shaburov have way too much fun making art. So much fun, in fact, it should be illegal, and sometimes it almost is. Although they act like accidental tourists in that holy hierarchy called the international art scene, the works of the duo, who call themselves Blue Noses, now command a nice sum at auction. Their “Era of Mercy” photograph, which depicts two kissing policemen in a birch forest, would probably now sell for five figures. They don’t need a public relations team; it is publicity enough that their art is confiscated by bewildered regional authorities from time to time.

Blue Noses don’t seem official enough for a retrospective. They have become known as the Dumb and Dumber of the Bienalles and their obvious peasant-style jokes-called-art have garnered them an audience outside the typical art audience. And yet a retrospective of the Blue Noses is taking place through Oct. 31 at Winzavod, the trendy Moscow wine-factory-turned-art-space.

Sasha Shaburov used to have serious dental problems. In the early 1990s, he received a grant from the Soros Foundation to do an “art action” and videoed the transformation of his pretty horrific teeth to American-style, high-beam whites. Ten years later, he paired with Slava in “Two Against the Mafia,” a hilarious performance that ends with their heads stuffed in pickle jars.

But they are best known for “A Candle on My Life.” In this photograph, the duo, along with a fellow prankster, portray Jesus, Vladimir Putin and Alexander Pushkin. The piece was seen as a political provocation, and was the subject of a criminal complaint.

A truly inspired Blue Noses piece is “Lenin Turning in His Grave.” In it, Lenin is projected on to the bottom of a cardboard box, where he literally coughs and turns. They scoff at the idea that they are opposition artists. “I wish the FSB was interested in me,” they often tell journalists.

So is this stuff even art? “I am sure we are not saying anything constructive,” said Sasha Shaburov.

It’s hard to argue with a philosophy like that.