A critical mass of intellect 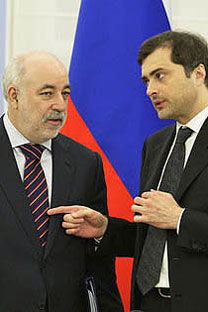 At a meeting with some of the country’s leading businessmen, Deputy Head of the Presidential Administration Vladislav Surkov announced that the Ministry of Finance has already allocated funds for the innovation city of Skolkovo. October 11 the Council of the Skolkovo Foundation is going to approve all documents needed for all the innovation projects to be selected and receive the necessary funds by the end of the year. Thus, the innovation city outside of Moscow, which still does not physically exist, will begin operating virtually. Very soon it will be populated by scientists, in order to accumulate “a critical mass of intellect”. For them, businessmen have already prepared a number of ideas for miracle-products.

From the legislative point of view, everything is ready for the innovation city to become operational. The president has already signed the basic Law on Skolkovo, which describes the status of the center, its special structure of management, tax preferences and discounts, and will be provisioned for the residents. Earlier, the question regarding the land for the innovation city and abolishment of immigration quotas for foreign highly qualified specialists was resolved. Now, everything depends on the documents, which should be adopted by the Foundation. As soon as it is determined what criteria the innovation projects need to follow, and by what algorithm they will be selected, the Skolkovo innovation city will be able to launch operations.

“Without having to wait for the construction of the center, we can already today, immediately, start financing the projects that are approved by the Council,” said Vladislav Surkov.

According to him, in making the selections, the Foundation should be guided by “hard-line principles”, the main one being – innovativeness. It should be something that no one else has. So far, things are not going well in this aspect. As an example, Surkov cited projects that the Presidential Commission on Modernization and Technological Development of the Economy asked from the large businesses. “In my unenlightened view, there were too many projects that could hardly be called innovational,” said the official. Many had simply copied certain designs, others were somewhat altered. The desire to receive state funds or simply appear present for mere formalities is understandable. “But, everything is being done for you!” Vladislav Surkov told representatives of the Russian Union of Industrial Entrepreneurs.

Another principle – is willingness to co-finance. The Foundation will not allocate money unless the company, which presents the project, does not agree to invest a share of its own funds. The risks should be shared, say Kremlin officials. A mandatory condition will be the participation of Russian and, more importantly, foreign universities in the projects. Moreover, naming the university won’t be enough – scientists’ names need to be present. “Graphene was not discovered by the University of Manchester, but by specific people,” said Surkov, referring to the recent Nobel laureates Andrey Geim and Konstantin Novoselov.

It would also be a good idea (in this case the Kremlin officials are not as uncompromising) for participants in a project, which lasts several years, to move to Skolkovo when it is constructed. It is very important to populate the city, says Surkov, “the critical mass of intellect must come together”, and then innovation activities can be effective.

As was later explained to Izvestia by the Co-Chairman of the Skolkovo Foundation Council, Viktor Vekselberg, several hundred projects have been submitted for the Council’s review, including 40 projects from large business (which were transferred to Skolkovo by the Presidential Commission).

“One of the businessmen told me: ‘You know, this (Skolkovo – Izvestia) will not improve your image’. But, I’m not thinking about my image. I want us to live in a different country...The same one, but different,” Vekselberg told his colleagues from the Russian Union of Industrial Entrepreneurs.

They did not object. How do they see their contributions to the creation of “this other country”? Head of Wimm-Bill-Dann, David Yakobashvili, enthusiastically spoke about the new methods of using peat, which in a compressed state (this is the novelty) is able to provide large amounts of heat. Moreover, a material has been received, said the producer of juices and milk, that is based on ceramic foam – “it is 10 times stronger than brick, 12 times lighter, and does not decompose in water”. And finally, Yakobashvili was especially impressed with a torch able to cut reinforced concrete “swimmingly”.

Before giving the floor to the next speaker, head of EvrazHolding, Aleksandr Abramov, said he felt it necessary to make the remark: “He studied at the Moscow Institute of Physics and Technology along with a Nobel laureate, and could have also gotten a million if he hadn’t gone into business. And now, he is just a simple billionaire”.

The simple billionaire supported the idea of the Skolkovo innovation city. “There, it will be possible to resolve the problem of theft on a reputable level,” said Abramov.

But he has some personal ideas as well. It would be nice to support those who export their finished product with high added value: you sell a machine in Britain – come, you will receive money (apparently, Abramov has such machines).

“We do not support the export of ready-made production,” responded Vekselberg.

Mikhail Abyzov from the E4 engineering company announced that his Foundation for the Support of New Construction Technologies has developed an energy-efficient housing design which uses 10 times less electricity than standard models. However, an impression had formed that even Abyzov had doubted the innovativeness of this project. He tried proving to the audience that it is not necessary to create something absolutely unique – “technologies can be borrowed and innovated”.

“And yet, let’s not copy,” persisted Surkov.