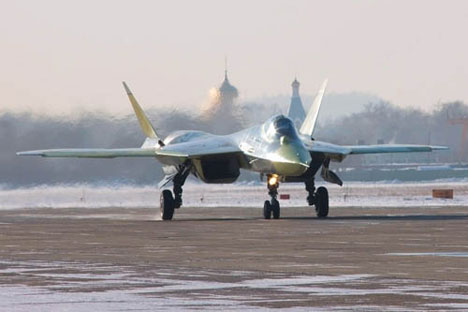 The 10th annual meeting of the Indo-Russian Inter-Governmental Commission on Military-Technical Cooperation (IRJGC-MTC), held in New Delhi, highlighted the dramatic progress the two countries have made in their defence ties since the first session of the commission in 2001.

Over the past decade India and Russia have largely transformed their multi-billion-dollar defence interaction from a buyer-seller relationship to joint development of high-end technologies. While 10 years ago the bulk of defence deals were off-the-shelf purchases of Russian hardware, today a half all Indo-Russian defence projects involve joint designing and manufacture of advanced weapon platforms.

Two thrust-area projects discussed at the 10th IRJGC-MTC will define the agenda of Indo-Russian defence cooperation in the years to come: the fifth-generation fighter aircraft (FGFA) and a multi-role medium transport aircraft (MTA).

The two countries have finalised a preliminary design contract for FGFA which is expected to be signed during President Dmitry Medvedev’s visit to India in December.

The FGFA will become India’s biggest-ever defence project. The IAF plans to acquire 250 to 300 5th-generation stealth fighters. They will give the IAF unquestionable air supremacy in Asia, according to defence experts. The FGFA is tipped to be superior to the comparable F-22 Raptor while costing just over half the price of the American 5th-generation plane.

The FGFA is the first truly joint aviation project. India will contribute about 30 percent of the plane’s total design by providing composite material components, some avionics, electronic warfare systems and cockpit displays. Indian designers will also be responsible for re-modeling Russia’s single-seat fighter into a two-seater version for the IAF.

The MTA project got the final go-ahead at the 10th IRIGC-MTS session with the signing of a shareholding agreement providing for a 50-percent contribution of each side to the plane’s cost and development. It is the first Indo-Russian project where India will be involved right at the drawing-board stage. The 20-tonne MTA will not only give the Indian and Russian air forces a new workhorse, but at a later stage will also be modified into a passenger aircraft of a 100-seat capacity.

“In the coming 10 years, the FGFA and MTA projects will be the flagship programmes in Indo-Russian defence cooperation,” Defence Minister A. K. Antony said after co-chairing the 10th IRIGC-MTC with his Russian counterpart Anatoly Serdyukov. He praised the two projects as “shining examples of defence cooperation between the two countries.”

Russia, which heavily dominated the Indian defence market for the past 50 years, today faces strong competition from leading arms exporters – the United States, Israel, France and other European countries. Russia is also criticised for delayed deliveries, cost escalations and inadequate product support. Mr. A. K. Antony flagged India’s concerns at his talks with Mr. Serdyukov, who promised to take the matter under his personal control.

However, Russia has one crucial advantage over its Western rivals: it is willing to share with India any defence technologies requested by the India.

“There are things that we can get only from Russia. No one else would give them to us,” Indian military diplomats in Moscow admit.

Next March, for instance, India will get the Nerpa nuclear-powered submarine from Russia on a 10-year lease. It will help the Indian Navy train the crew for its first indigenously built nuclear submarine, INS Arihant, whose design is also based on Russian Akula-class submarines.

The FGFA project is another example of the unique nature of Indo-Russia defence cooperation. It will propel India into the exclusive club of global powers – the U.S., Russia and China, who have or will have in the foreseeable future the capability to build the 5th-generation fighter aircraft.

“Russia does not have, nor will ever have in the future, any restrictions on the supply of most cutting-edge military technologies to India, because it is in Russia’s national interests to see India as a strong regional and global military power,” said Ruslan Pukhov, head of the Moscow-based Centre for Analysis of Strategies and Technologies (CAST).

India is the only country with which Russia has a long-term programme of defence cooperation. Last year the Defence Ministries of the two countries approved a second 10-year programme till 2020, which envisiouns about 200 joint projects in aviation, shipbuilding, armour and missile technologies.

Geopolitical considerations, as well as growing international competition may prompt Russia to further expand its defence cooperation with India into the sphere of strategic technologies, such as nuclear submarines and delivery systems, Russian experts said.

“India’s de-facto joining of the nuclear club makes international restrictions on the transfer of strategic weapon technologies to it pointless,” Mr. Makienko said. “Russia will have no rivals in such technologies on the Indian market.”

In coming years India will remain Number 1 destination for Russian defence sales, according to the Russian Centre for Analysis of International Weapons Trade (CAIWT).