Russians don't have to look far for organic produce 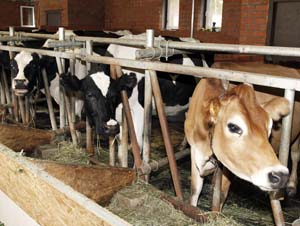 Every weekend I go to my local market. My usual path is like this: First, I’ll go to the Lipetsk farmer for dairy products, then on to the Tambov farmer for meat and poultry; I buy honey from people I know in Volgograd; the fruit and vegetables I like best are those that are in season. Of course all this can be bought much more cheaply at the supermarket, but the taste of a chicken that has been running around a farmyard is completely different from that of a chicken that has spent its short and unhappy life imprisoned in a cage at a factory farm. And organically grown apples smell completely different from those that will keep for half a year.

It turns out that I share these preferences with many of my compatriots. According to a recent survey carried out by the research company Romir, 39 percent of Russians believe that high-quality produce and Russian produce are one and the same. This surge of culinary patriotism is easily explained. In the early 1990s, when the Russian market was flooded with imported produce, their foreign origin alone was seen as a guarantee of quality, but it gradually transpired that this was a simplistic view. After it became known that much foreign produce was genetically modified, enthusiasm for it cooled off completely. This is a good example of Russian backwardness being one of the country’s assets: Thanks to the fact that the progressive feats of Western bio-engineers were never applied to Russian agriculture (due to lack of funds), Russian produce has retained its natural taste.

According to the survey, 37 percent of Russians are willing to pay more for produce free from genetic modification and 41 percent would spend more on organic produce. In the early 2000s, the first organic food shops began to open in Russia. Their proprietors were counting on the Russian public being willing to pay more for quality food, but nearly all of these enterprises folded within a short time. The people who set up these shops approached it from the wrong angle; ninety percent of the produce in these shops was imported from outside Russia, so it was much more expensive to buy food in these organic shops than in the most expensive supermarkets, let alone at local markets. The owners of these organic shops blamed their failure on the ignorance of the Russian public, but in my view, common peasant savvy also played a role. City dwellers from even the biggest Russian towns have not forgotten their peasant roots, and every one of them has either a dacha in the area or relatives who live in the countryside. The result is that Russian city-dwellers still remember the taste of true local, organically grown food. As a result, they could not justify paying the price for imported, certified organic food from special shops when they could get quality food at a better price at the market.

There is no official organic produce in Russia, but this is because organic standards have yet to be developed, and it does not mean at all that organic produce doesn’t exist. In fact, state regulations on food production are already quite strict. Russian health authorities recently banned the import of chicken drumsticks from the United States because they had been treated with chlorine. According to data from the Ministry of Agriculture, the United States uses 11 times more mineral fertilizers than Russia, and China uses 23 times more. Pesticides are also used much less frequently. All this is a result of Russia’s relative poverty, which could unexpectedly be turned to its advantage as the market for organic food continues to grow.

And now, major suppliers of organic produce are Russian farmers. A year ago, Alexander Konovalov ran a big web marketing company. Now he owns a farm where he grows vegetables and raises pigs, sheep and chickens. One of his latest plans is to start breeding rabbits. His daughter Nastya, a graduate of Moscow State University, said that at first she was embarrassed to tell her friends that she worked on a farm. But when her friends came to visit, tasted the farm’s products, and began to regularly order food from the farm, her initial concerns disappeared. Although their products are twice as expensive as those from a conventional supermarket, the organic farm already has a regular client base. Their produce cannot be officially verified as organic because there are no standards in place, but Konovalov’s customers trust him and for them, the quality of the food speaks for itself. I also trust the farmers at my local market even though their produce has no “organic” label. The difference is plain to taste.

In communist times there was a very popular anecdote. An Englishman asks a Russian: “When do you start selling strawberries in your country?”
The Russian answers, “In June.”
“And in England,” says the Englishman, “we start selling them at six in the morning.”
Today, strawberries are sold all year round in Russia and that’s a good thing, but you cannot dispute the fact that strawberries in January have a very different taste from strawberries in June. I prefer to wait until June, and for the winter, I have three kilograms of cranberries already prepared that can be turned into a really tasty jam.