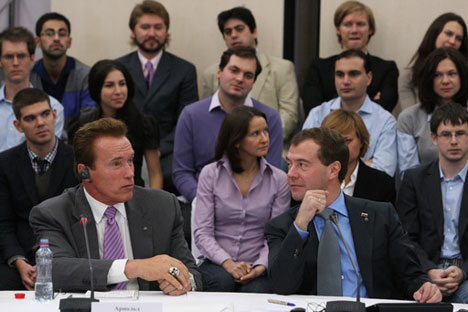 He is taking part in the Global Innovation Partnership Forum, featuring such Russian and American businesses as Rosnano, the Skolkovo Foundation, Global Technology Symposium and Silicon Valley Bank.

Ahead of business there were some light moments. On arrival in Moscow, Arnold Schwarzenegger wrote an entry in his Twitter microblog, “Just landed in Moscow. Beautiful day. Can't wait to see Pres Medvedev.”

The Russian President, whose English-language Twitter account is KremlinRussia_E, was quick to answer, “@Schwarzenegger, welcome to Moscow. Looking forward to meeting you and your delegation at @skolkovo.” Dmitry Medvedev and Arnold Schwarzenegger have also become mutual followers on Twitter.

After two days in Moscow the California Governor’s delegation, not including Arnold Schwarzenegger himself, will fly to the city of Kazan for further talks with local businesses.