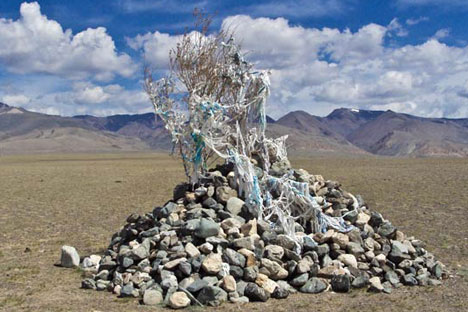 The painter Grigory Choros-Gurkin, who lived in Russia’s remote Altai wilderness wrote in a poem:

“Altai is more than simply mountains,
forests, rivers, or waterfalls.
It is a living spirit …
gazing into the Universe.”

The lakes, woods and deserts of the Altai Republic make a spectacular destination for travellers. Here, on the borders of Mongolia and Kazakhstan are the relics of old shamanic religions and prehistoric rock-carvings above meadows full of flowers. There are also opportunities for rafting, hiking, mountain climbing and sleeping in traditional yurts.

An overnight train journey from the vibrant Siberian capital, Novosibirsk, brings you to dilapidated Biysk, with its few wooden houses and silver-domed church, built by 19th century merchants. There are several ornate brick buildings in the Siberian baroque style, one of which houses the town’s museum.

The road towards the distant mountains of the Altai Republic becomes gradually more scenic as you pass through woods and valleys. This more accessible edge of the region has several seasonal markets selling local produce: honey with nuts, pickled cucumbers, liqueurs flavoured with forest fruits, and wild strawberry jam. Local tourists pour in on summer weekends to stay on the scenic shores of wide Katun River.

The Katun (“princess” in the local language) runs through tall cliffs and pine forests, lined with villages and dachas. Numerous companies offer rafting trips that last from two hours to several days. They supply life jackets, waterproof gear and helmets for the white-water ride past rocks and islands. The “Altai Voyage” company (tel. 8-913-977-3322) can provide rafting and fishing trips, and tours of some of Altai’s scenic lakes in cars or on horseback.

Thrill-seekers can also head to treetop adventure playgrounds like the “Extreme Park.” Near the popular village of Chemal, you can fly across the hydroelectric dam on a high wire or bungee-jump off the cliffs. More spiritual pilgrims descend on the area to visit the island chapel of St. John, reached by a rickety bridge or take part in the new-agey festivals that have grown up around the local religion.

The Chusky Tract, the 375-mile main road that leads to the Mongolian border, bisects the republic and passes through a series of changing, dramatic landscapes. The highest point is the Seminsky Pass, a mile up, which features a stone circle, a handful of cafes and souvenir stalls and a sports resort. In medieval times, the Scythian and Mongol hordes crossed this pass. The hills around are covered in incredible wild flowers: lupins and helleborenes, lilies and columbines.

The next pass, long and winding, is known as the “mother-in-law’s tongue.” The snow doesn’t melt up here in the hills until late spring. In some years, it is possible to ski in early May. Beside the road, there are mysterious carved figures known as “Kameny Baba,” or stone grandpas. Petroglyphs of deer and bison have survived for thousands of years, scraped into the red rocks of the aromatic shrub lands.

South of the Chusky Tract, the snowy mountains rise above dusty plains crossed by fast-flowing, freezing rivers and galloping herds of horses. The hills here and the mountains themselves are prime walking territory and the views are breathtaking. The Sib-Alp tour company has a new campsite in the area where it is possible to stay in a yurt. Accessible only by jeep, there is a cold spring and a pinewood banya. The usual privations of outdoor living (outhouses, insects, extreme temperatures) are outweighed by the incredible surroundings.

The plains and valleys here in the shadow of the Ak-Tru Mountain not far from the cattle-grazing town of Aktash are among the most scenic in all Altai. The fields are full of flowers: blue gentians and golden melliots and bedstraws, purple vetches, bellflowers and meadowsweet. There are nearly 1,000 plant species in Altai, including rare or endangered ones. It is a naturalist’s paradise with a biosphere reserve nearby and diverse range of habitats

Further east, the lush valleys give way to rocky moonscapes where the occasional trees are covered in knotted, votive rags. Ground squirrels run between the outcrops and patches of wild thyme and tansy form pungent straggling carpets between the beribboned bushes. Eagles, kites and buzzards circle overhead. Kosh Agatch, the last town before the border, has an abandoned feel. Its nickname is “farewell trees.”

The “Kurgany” burial mounds and heaps of pebbles look increasingly eerie in the desert landscapes stretching towards the Mongolian border. The ancient Telengiti tribe have recently restored their traditional religious site, keeping alive a faith that celebrates the natural world around them. The open site, with a stone circle and altar, was chosen because three sacred mountains are all visible on the horizon. Slava Toktoshev, one of the organizers of the restoration explains that the altar is a “spiritual table: a focus for nature, trees, mountains, the world force.”

Getting to this remote part of the world takes a certain degree of perseverance. Independent travellers might reach the more accessible northern areas, but getting into the scenic heart of the region needs transport and expertise.

Sib Alp Tour Company takes travellers by jeep from Novosibirsk. An individualised holiday for a family of four costs around $3,200.
http://www.sibalp.com/en/index.html

Eco Tours runs group trips for two to 12 people for nine to 18 days, specialising in the region’s cultural or natural treasures. See their website http://www.ecotours-russia.com/Destinations/Altai
for more details.