Has the Gazprom tower met its match? 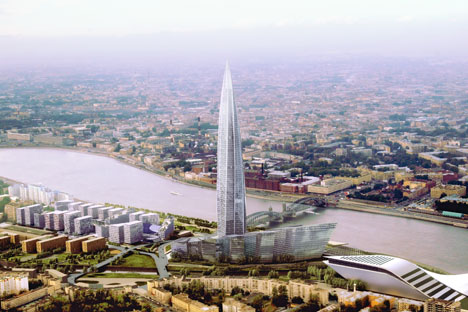 St. Petersburg is often referred to as Russia’s second capital, and it is the most European-looking city in Russia. In 1990, the city’s historic center, suburbs and fortifications were added to the UNESCO World Heritage List, which means that they are unique in their kind and brightly illustrate an important period in Russia’s history. This also means that new buildings should not distort the city’s iconic look. There’s one company, however, that is not bothered by these considerations – it is Gazprom, Russia’s state gas monopoly.

An exhibition of design projects for the Okhta Center skyscraper, a new office building for Gazprom, was held at the Museum of the Russian Academy of Arts in November 2006. At that time, the project was known as Gazprom City, but it later changed its name. In summer 2006, it became clear that the new building would change the look of the city’s historic center, and the St. Petersburg Union of Architects sent a letter of protest to Governor Valentina Matviyenko. Their protest was ignored, and the Union of Architects boycotted the competition. Celebrated foreign architects Norman Foster, Kisho Kurokawa and Rafael Viñoly supported their Russian colleagues by withdrawing from the jury. They, too, realized that the new skyscraper would be sharply out of sync with the city’s iconic beauty.

This left the jury comfortably homogenous, composed of Gazprom and city administration officials plus Peter Schweger, the designer of Moscow’s Federation Tower. They chose the proposal they liked best, and Governor Matviyenko increased the acceptable height of buildings in the city from 167 feet to 1,320 feet. Even before that decree was signed, work began to clear the construction site and demolish surrounding old buildings. Not waiting until the completion of archaeological exploration, ground excavation began. A powerful campaign swept across the country’s main TV channels in support of the Gazprom project, and voices were heard that Gazprom would itself finance the construction, although these claims were dismissed by opponents.

It is interesting to compare the images of the city’s projected appearance with the skyscraper presented by the supporters and the opponents of the controversial project. A picture posted on the website of the NGO Zhivoi Gorod (Living City) shows a dark gray tower placed smack in the middle of the old city, while the Okhta Center’s official website portrays the building in silverfish tones, light, almost transparent in some pictures, with no historic buildings around. Indeed, Gazprom officials used this argument in the early stages of the campaign, saying that the tower would afford a breathtaking view of the historic center. There is little doubt that the tower would be the only place left to from which to get such a view of the old city!

Meanwhile, local residents are split on whether they need the new skyscraper. Some want their city to be modern, and many newcomers are not attached to the city’s traditions. And yet, the public movement against the Gazprom skyscraper has developed into an impressive campaign, especially by Russian standards. According to many opinion polls, more than half of the city’s residents are against the construction of the skyscraper close to the old city, while some 25 percent support the idea. In spring 2010, UNESCO experts confirmed again that the tower would distort the city’s harmonious look. In the end, the Russian government, which is often guided by lofty and vague considerations, made it clear to Gazprom that the company should think twice about whether it really needs the tower, and whether it needs to build it at the disputed location. The construction has now been halted, and if it stops altogether, this will be an impressive victory for public opinion and leading world experts.