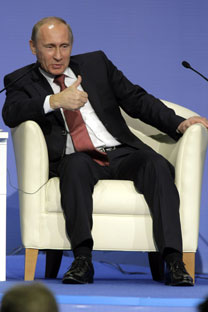 Optimism is not exactly the middle name of Russian Prime Minister Vladimir Putin, but it would increasingly seem so. “I think that the Russian economy can avoid a repeat of the negative scenario that is under way on many European markets — we can see it now — when a long stagnation period follows a winding-down of state programs,” he said at VTB Capital's investment forum.

Putin also reiterated the government's commitment to increase the attractiveness of the Russian market for foreign investors by creating a system of tax preferences.

A number of bills aimed at stimulating foreign investments to modernize the economy have already been sent to the State Duma, and another one will be sent in the coming days, he said.

The new bill cancels the profit tax for investors selling securities that are not publicly traded and have been held for at least five years.

“We appreciate the fact that even more investors choose Russia's economy and its stocks … to invest capital,” Putin said, adding that foreign direct investment has reached $25 billion so far this year.

“Excellent!” said Dominique Cerutti, deputy head of NYSE Euronext. He told The Moscow Times that he was “positively impressed by the personal commitment of the prime minister” to turn Moscow into an international financial center.

“I think the understanding of the need of diversification of the economy is one of the main parameters that stand out here," said Telenor chief executive Jon Fredrik Baksaas. "Any moves in this direction will be welcomed by the investment community.”

Projects with Skolkovo as “an engine of innovation” will be one of the three pillars of the future growth of country's economy, presidential economic aide Arkady Dvorkovich said.

Privatization of state-owned companies, the second driver of the growth, will also boost investments as the government sells stakes of up to 50 percent in order to raise the companies' competitiveness, Dvorkovich said.

But investment activity is not keeping pace with current economic growth. “Investments aren't growing yet the way we want them to grow," Dvorkovich said, adding that the government's economic growth forecast was unlikely to be reached without increasing investments in the coming months.

The third factor influencing the economy's growth is capital inflow, he said.

Some of the negative aspects of economic growth were also touched upon. During the question and answer session, investors brought up the issue of fighting corruption. “In general … I think that the fight against corruption is the main evil,” Finance Minister Alexei Kudrin said, causing the audience to burst into laughter. He quickly added that he had said this by mistake.

When asked about Mikhail Khordokovsky, Putin said, "Yukos is a special case; it is a criminal case," and added that it should be considered outside the framework of the investment climate, since it involved acts like murder.

Dvorkovich said he doesn't like the tone of the term "recovery," and told the forum that the government's foremost task was “renovation of the economy and creation of the basis for the new economy, which could grow sustainably over many years."

Putin concurred, saying, “Healthy and qualitative growth of the economy” will be the main driver in reducing the budget deficit.

As a result, Russia will see a budget deficit of 3.6 percent of GDP next year. The figure will drop to 3 percent in 2012, and by 2015 there will be no budget deficit.

The prime minister pointed out that in the three-year budget plan sent to the Duma last month, there is no anti-crisis package. He said the country won't need “a reserve cushion” to cope with possible problems.

“We'll be able to react effectively to any force majeure in the framework of the standard budget rules,” he said.