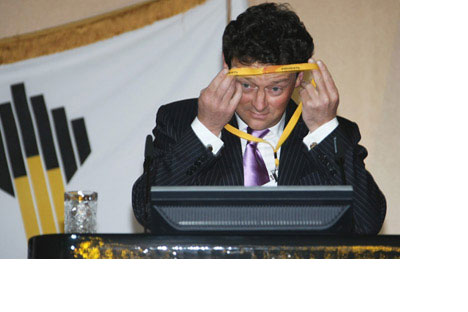 "It is not only for manufacturing nuclear equipment, but we are planning to also manufacture balance-of-plant equipment for conventional power plants," said Vladimir Kashchenko, chief executive of Atomenergomash, or AEM.

"We do not want to specify any individual company at the moment, but we are talking to leaders in the Indian market," Kashchenko said on the sidelines of the India Nuclear Energy Summit 2010, without elaborating on any financial details.

India plans to add 63,000 megawatts of nuclear power plants by 2032, while its present nuclear capability is at about 4,500 MW.

The Indian government has recently entered into civil nuclear pacts with several countries including the United States, Russia and France, and nuclear equipment suppliers from these countries are competing for the share in the Indian market.

Kashchenko said India's norms regarding domestic manufacturing for foreign equipment suppliers were the main reason to have local partnerships.

He said the Indian manufacturing joint venture would serve as a base for AEM to supply power equipment to other Asian and African markets.

AEM will set up an India office by December, and a partnership with an Indian company for nuclear equipment manufacturing is expected to be finalized by April next year, he said.