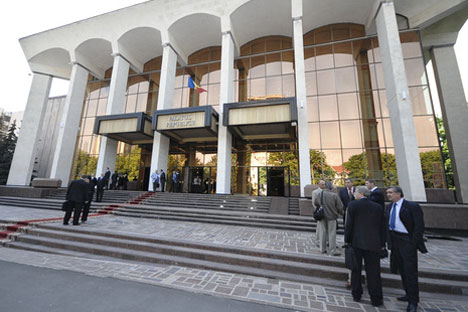 Moldova is preparing for another round of parliamentary elections. In 2009-2010, the country stands every chance of breaking the record for the most election campaigns in the shortest period of time. In contrast with the majority of post-Soviet states, Moldova is a parliamentary republic rather than a presidential one, so electing a parliament is not just a matter of selecting lawmakers, but a reform of the entire government structure; the parliament is responsible for electing the republic’s president. In Moldova, a non-operational parliament paralyzes the entire government machine.

Over the past year, the Moldovan government was restricted. First, the majority Party of Communists of the Republic of Moldova (PCRM) were not able to elect a president, which led to the premature parliamentary election of July 29, 2009. In these elections, the Communist Party experienced its biggest defeat of the last decade. The Communists were forced to relinquish their pivotal position to their opponents, the Liberals, Moldovan Democrats and the Liberal Democrats, who together made up the Alliance for European Integration. But these adversaries of the PCRM did not manage to save the country from an internal political crisis. The majority they achieved over the Communists was not a landslide victory and within parliament, they were also incapable of electing the head of state.

Additionally, the European alliance was also internally unstable. The politicians in the alliance were too incompatible in terms of their methods and opinions. Foreign policy was a particularly contentious issue. The Liberal leader Mikhai Ghimpu attempted to follow in the footsteps of Georgian President Mikhail Saakashvili and force the Russian army out of the separatist region of Transnistria. Meanwhile, Ghimpu’s supposed ally, Moldovan Democrat Marian Lupu, went to Moscow in September to meet with Sergei Naryshkin, head of Dmitry Medvedev’s presidential administration, and to sign some agreements with United Russia. And despite its name, the coalition experienced a serious divergence of opinion on the issue of European integration. Lupu and Liberal Democrat leader Vlad Filat expressed their willingness to coordinate with Brussels on Moldova’s internal political transformation, but Ghimpu declared he was capable of determining the best policies for Moldova’s internal political development.

In this way the latest parliamentary elections, scheduled for Nov. 28, will be an unconventional test of the national elite. Will the blocs and parties sacrifice their personal ambitions for the sake of the republic? The internal schisms, which have now reached the public sphere, have seriously weakened the position of the Moldovan Liberals, Democrats and Liberal Democrats. And the Communists’ triumphant return to power is not by any means guaranteed—a lot will depend on the impact of the key political figures’ election campaigns, and on the resources they will be able to mobilize. This is why the significance of the pending campaigns goes beyond the internal political struggle. Out of all the post-Soviet republics, Moldova has the most ill-defined and contradictory sense of national self-awareness. Should Moldova consider itself an independent entity with its own identity, or should it see itself as a fragment of Romania, or still tied to Russia? Today in Moldova, these themes are far from abstract academic discussions; they are political weapons that will be important in the fight for votes.

Russia is watching the potential changes in Moldovan politics, considering if the victors in the election will turn towards the West. Russia has few allies among the Moldovan elites. In 2001-2003, Russia considered the Moldovan Communists the main pro-Russian force in Eurasia. But the PCRM has also several times demanded the withdrawal of the last of the Russian 14th Army from Transnistria. They have also allied with Kiev in enacting economic sanctions against the separatist region. Meanwhile, the Liberal party of Moldova is actively pushing union with Romania. Many of the young people who form the base of this party have studied in Romania (every year the Romanian government gives more than 1,000 grants to Moldovan students). However, not everyone in Romania is overly enthusiastic about the idea of a union with the poorest country in Europe, which has an ongoing unresolved conflict with a separatist region.

There is no escaping the fact that roughly 10 percent of Moldova’s population has left the republic in search of a better life. Some have gone to European countries—primarily Romania, Italy, Spain and Portugal—while others have found employment in Russia or Ukraine. And this is why there is need for an internal political discourse on Russia, Romania and Europe; a unanimous decision in favor of prioritizing relations with Moscow, the West or Bucharest is impossible. However close the Moldovan leaders from the “European coalition” are to Washington, Brussels and Bucharest, they appreciate the role Russia must play in solving the Transnistria problem and the fact that many of their compatriots work in the country. Conversely, the importance of Russia for Moldova in these respects does not cancel the Romanian grants or the large number of Moldovans living in Southern Europe. And in Moldova, if not in any other country in the post-Soviet sphere, the next president could be a pro-Western Communist or a Westernizer who is also a Russophile.

Sergei Markedonov is a visiting fellow at the Centre for Strategic and International Studies in Washington, DC .