IMF reform: time for Europe to give in 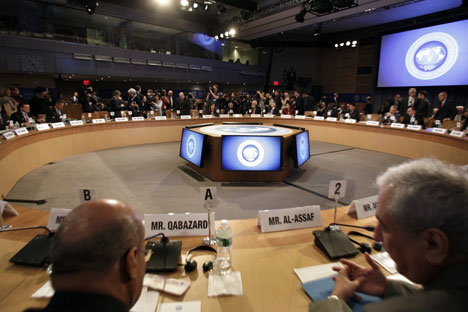 If this reform goes through, the global economy will become more honest and fair. What makes this reform so challenging is that it has little to do with economic matters and mostly focuses on global politics.

Against this background, the need for IMF reform is obvious. The rapidly expanding economies of the developing world have the right to demand parity within the IMF. While leaders of the G20 previously agreed for a redistribution of 5 percent of the quota, some experts have proposed a 7 percent redistribution. This plan is supported be members of the BRIC groups as well as the Group of 24, which includes developing economies in Africa, Latin America and Asia.

The main concept behind the reform was declared five years ago by Rodrigo de Rato, then IMF managing director. The idea was that the entire global community must feel that its voice is heard in the IMF. Over the past five years, however, the European Union has been successfully resisting this reform. Five years ago, de Rato’s statement seemed purely theoretical; public attention to the reform largely centered on the appointment of the managing director. Since then, however, the developing world has developed some very concrete demands, and in this situation the problem of the IMF’s legitimacy takes on added importance.

The European Union currently holds 33 percent of the votes in the IMF, one-third of the seats on its board of directors and controls the position of managing director. Understandably, the EU does not want to lose all these privileges. But today it is obvious that the 12 percent of votes in the IMF held by the BRIC countries in no way at all reflects their political and economic weight. Therefore, it is now time for the BRIC countries to start showing as much political will and resilience as they can.

The moment of truth is approaching: the doubling of the IMF’s capital that is currently taking place will determine how forces will be aligned for many years to come. If the quota system is not reformed now, it will never be revised in any way substantially, as no one will need it for new capital volumes.

In 2008, under pressure from Europe (and especially from then-British Prime Minister Gordon Brown), the “April Package” of reforms was passed. Among other things, it introduced a new formula to revise quotas. The formula, which involves an ad-hoc quota increase to underrepresented countries and a promise to realign voting shares every five years, was criticized as unfair by many, especially by top US officials, but they could not block it. Although the formula has not yet come into effect, the EU wants it to be at the heart of any changes to the IMF. However, the plan intentionally distorts the simple and clear principle for assessing a country’s shares in the global economy based on its GDP.

What can the BRIC countries and the US do? Washington made its move at the end of August when it blocked the IMF’s proposed board of directors. Europe responded with vague offers to change the board’s structure. As for the BRIC countries, they allowed themselves to be dragged into the IMF operation for increasing its capital. At the G20 summit a year ago, it seemed that the emerging economies were given a guarantee that the quota system would be reformed. At that time, it was decided to “redistribute the IMF’s quotas in favor of dynamically developing markets and emerging economies by transferring at least five percent of the quotas from over-represented countries to under-represented ones, using the existing quota formula as the basic starting point.”

No real guarantees, however, were provided. Russian Finance Minister Alexei Kudrin recently revealed that based on this formula, Europe will redistribute only around three percent of the votes. According to other reports, the United States may also see its quota cut under the new formula – something that will not please Washington.

The EU has run the show for too long now. If the United States and the BRIC countries stand their ground, the EU will have to make concessions and real compromises. Hope for any serious change lies in the G20 summit in November in Seoul, South Korea. In this context, the meeting of French President Nicolas Sarkozy, German Chancellor Angela Merkel and Russian President Dmitry Medvedev, scheduled for mid-October in Deauville, France, raises serious concerns. In the friendly company of Sarkozy and Merkel, Medvedev may lose some of his confidence at a very critical moment. On the other hand, Medvedev can be very persuasive himself. If he succeeds in making the two European leaders more flexible, it will be Russia's invaluable contribution to strengthening the IMF as a legitimate global institute.

Andrei Denisov is the deputy editor in chief of the daily newspaper Vremya Novostei.