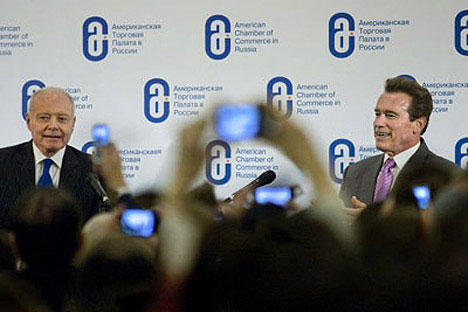 The 63-year-old bodybuilder and Hollywood star came to the capital to lead the 2010 Silicon Valley trade mission to Russia, bringing along senior management from 28 U.S. companies — including leading IT and energy companies and venture capital firms — as well as State Department officials.

"President Medvedev is a great visionary. He had this vision to create a Silicon Valley in Skolkovo," Schwarzenegger said.

"I love places where there is an extraordinary potential," Schwarzenegger said of Russia. "It's almost like looking at a gold or diamond mine and saying, 'All you got to do is go in there and get it.'"

The Kremlin has been pushing the development of the Skolkovo innovation city, just outside Moscow, as a way to diversify Russia's economy and encourage foreign investment from high-tech companies.

The project is being developed by billionaire Viktor Vekselberg, who told reporters on Monday that investments in Skolkovo could reach 200 billion rubles ($6.7 billion) over the next three to five years. Under the investment plan, which "still hasn't been approved by anyone," 50 percent of the funding would come from the Russian state and the rest from investors, Vekselberg said, Interfax reported.

Schwarzenegger arrived Sunday to follow up Medvedev's summer tour of California's famed Silicon Valley, where he first met the governor, started his Twitter account and met with a number of CEOs from IT companies. In February, another group of U.S. tech executives visited Russia to discuss their experience with innovation.

"I know the challenge that you had after communism fell. … Now is the time to diversify,"Schwarzenegger told the members of the American Chamber of Commerce, who laughed and applauded as Schwarzenegger shared tales of his mother smacking him with a ruler when he was a kid.

Medvedev noted that Schwarzenegger arrived in Moscow as the city was waiting for the new mayor. "If you were a Russian citizen, you could work here for us," Medvedev told the Austrian-born politician, who holds dual citizenship.

Schwarzenegger responded that he almost had to skip the trip because of his state's budget crisis, which was resolved late last week. California's economy was worth $1.8 trillion last year, compared with $1.3 trillion for the Russian economy.

In between jokes, the governor was quick to promote his state and praise the potential of his hosts.

"We know that Russian people have extraordinary ingenuity. … So with those minds, with our minds, one and one will become three," Schwarzenegger said.

"It's all about bringing back the economy; it's all about jobs, jobs, jobs," he said, stressing the fact that by bringing businesses to Russia, U.S. companies will actually be creating new opportunities for American workers.

"Bottom line is that California is a state that has a lot to offer," the governor said.

Despite occasional skeptical comments from audience members, the visit seemed to be going on a positive note.

"Vekselberg's team has done a great job. They have prepared a comprehensive presentation for the delegates. It is clear now that it is not just some blah-blah-blah," Alexander Galitsky, managing partner at Almaz Capital who participated in meetings with the leaders later Monday, told The Moscow Times.

Galitsky's firm was among the first to bring money to Skolkovo by investing 900 million rubles ($30 million) into a business incubator housed in the planned hub.

Businessmen and delegates said that while Monday's visit broke some ice, it will take time to generate actual investment.

"It's too early to speak about concrete deals. And some of these companies already have investments here. So this is the way for these guys to see how things are going right now and to introduce their colleagues to the Russian market," Andrew Somers, president of the American Chamber of Commerce in Russia, which had organized the talk, told The Moscow Times.

"I think the deals will come later. Usually if you've got 15 [companies] and you get one deal out of 15 in a year that's very good," he said.

Nonetheless, Medvedev's efforts to promote Russia as a country that is opening up to foreign investment already seem to be paying off, entrepreneurs said. Medvedev is seen by many in California as a "visionary," Galitsky said.

"You wouldn't get these guys here unless people in the States really believed that Russia is trying to change and become much more open," Somers said.

But earlier investors in Russia are often quick to caution their colleagues that the great rewards the country offers also come with risk.

"In general terms it sounds like Schwarzenegger is encouraging American businessmen to play Russian roulette. Out of six investors, five of them will have a positive experience but the sixth will blow his head off," Bill Browder, founder and CEO of Hermitage Capital Management, told The Moscow Times by phone.

Hermitage Capital was forced to leave Russia amid a legal crackdown after the company accused Interior Ministry officials of stealing from the state budget. Browder was denied entry to the country as a threat to national security in 2006 and Russia asked Interpol to put him on their wanted list last year — moves that he links to his stand against corruption.

"With all due respect, Governor Schwarzenegger has no idea of the risks of investing in Russia, and he is not going to be there when things start going wrong. … He won't be there to wipe the blood off the floors," Browder said.

The governor says his relationship with Russia began when he was 15, watching Soviet heavyweight lifters on TV.

"I knew that this is what I wanted to do with my life," Schwarzenegger said, referring to a bespectacled bodybuilder "who was also an engineer" and an "intellectual." Several trips followed, including for the 1988 movie "Red Heat" — in which Schwarzenegger played a Russian police officer — and then with the opening of Planet Hollywood in Moscow.

The Terminator star began his news conference on time and had a lengthy to-do list. He managed to squeeze in a metro ride, saw Red Square, and found time for brief photo sessions with multiple fans.

Medvedev and Schwarzenegger, both big fans of social media, exchanged friendly tweets and photographs throughout the day.

"Riding with President Medvedev in his great car. You're a great driver, Mr. President!" the governor tweeted Monday, referring to a vintage Soviet-era Chaika.

"I discussed with @Schwarzenegger not only investment but also sports," Medvedev tweeted, linking to a photo of the governor lifting weights.

At one point in the day, the governor explained to reporters that he came to Moscow because he had promised Medvedev: "I'll be back."

"So I came back," Schwarzenegger said.