Twenty-five questions for everyone in Russia: 2010 census begins 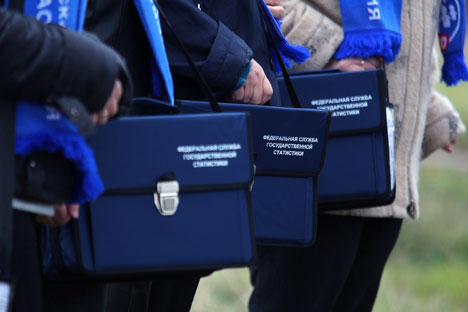 Knocking on doors in downtown Moscow is not how Vladimir prefers to spend his afternoons. But like thousands of other students in the Russian capital, the 20-year-old, who would not give his last name, is a "forced volunteer," drafted to work for the next 12 days on the country's census.

Vladimir says the work is surprisingly rewarding, however.

“I can’t say that I am glad or not glad about it. Of course, I would prefer to study than to do the census, to spend my own time. There are some who work who are not very happy," he says. "But what is interesting is to go flat to flat, to go to people, to see what kind of people there are. So there are pluses and minuses.”

Mundane to exotic
Of the 47,000 census takers who took to the streets in Moscow on October 14, 30,000 are students, officials say.

The forms they take from door to door consist of 25 questions, including basic facts like age, gender, income, and marital status. They also have some more exotic queries — like how people deal with household waste.

The census takers fill out the questionnaires themselves after speaking to respondents. Officials say the whole process should take no more than 15 to 20 minutes.

No one is required to answer the questions. In fact, no one is even required to open their door. Nevertheless, approximately half of the 50 residences Vladimir visited so far have let him in.

“I have a good impression. I didn’t expect that people would be so kind," he says. "There has not been one person yet who has not let me into their flat.”

Sergei Polesnikov, 20, a film production worker who was working on the set of a television crime series two doors down from a census office, was enthusiastic about the census, viewing it as a patriotic duty and an expression of national pride.

“Every person should take part so we know the size of our country's population, the Russian Federation," Polesnikov says. "I hope it will be higher than 150 million. Every year people die, but there are also a lot of people from the former Soviet Union who take Russian citizenship. So I think there will be more and more Russians.”

In reality, experts predict that the census will show a drop in the Russian population to 142 million, down from the 145 million counted in the 2002 census.

The first official day of the census was actually months ago. On April 1, census takers trekked to the remotest parts of Russia, such as the Far North where deer herders live and to islands such as Valaam on Lake Ladoga in the country's northwest.

The government will spend 17 billion rubles ($566 million) on the census, Surinov said.

Census takers are paid 5,500 rubles ($184) for the entire 12 days — a small sum, Surinov admits. He says he had to shame his own student son into working as a census taker.

Organizers have gone to great lengths this year to publicize the census and to inform citizens how an official census taker should look — carrying an official blue census bag and wearing a blue scarf — as well as what they have the right to do and not do.

Zoya, a pensioner, says that due to the public relations campaign, she knew how to tell a real census taker from a fake one.

“In the first place, there should be a blue scarf and a bag with census written on it," she says. "They must show a document. I haven’t seen a census taker yet. But we know every thing. We are up to date and ready.”

Nevertheless, Russian media reported that a fake census worker robbed a woman of 8,000 rubles even before the census began.

Census officials say all data given will remain anonymous and confidential. They point out that none of the data from the 2002 census was ever found for sale on CDs at markets, as is often the case with other databases — from police and tax authorities.

The census is the first one to fully embrace the Internet, and the website has all the questions in 16 different languages, including English, Georgian, and Tajik.

Surinov stresses that the census has tried to work with foreigners, including migrants, who, even if their legal status is shaky, will be counted.

“We have done a lot of work with a very difficult category — foreigners," he says. "It is, first of all, foreign workers, students. We hope that with some work and with the help of the media, the diaspora, and embassies, we can halt foreigners’ fear,” he says.

In real life, police will provide security to ensure that census forms remain secure and census workers are safe — especially when they visit neighborhoods that police consider potentially dangerous. Specialists, rather than students, will be used for these visits, officials say.

Female census takers have also been given advice on what to wear to protect themselves, said Vladimir.

“They said that girls should not wear revealing clothes, shouldn’t wear especially expensive clothes, and also not to wear jewelry at all,” he notes.

Seventy percent of injuries to census takers in the previous census were reportedly because of dog bites.

This article originally appeared on the RFE/RL site, http://www.rferl.org/content/TwentyFive_Questions_For_Everyone_In_Russia_The_2010_Census_Begins/2190884.html