What are they waiting for? 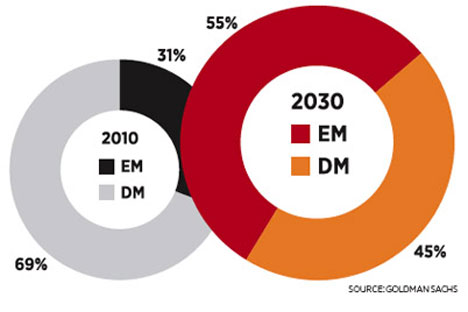 Emerging markets used to be a hobby for risk-seeking investors, but they will soon go mainstream, according to a report.

Goldman Sach's head of global economic research and BRIC guru, Jim O’Neill, coined the term BRIC (Brazil, Russia, India, China) in a classic paper in 2001, when he predicted that their combined economies would overtake the west in size by 2050.

His new paper not only moves the deadline forward China’s economy already overtook Germany’s in 2007 and has Japan in its sights for this year but states that the combined value of the BRIC equity markets will be bigger than those in the West as soon as 2030.

Currently, 6 percent of the assets held by institutional investors in the West are in Emerging Market (EM) equities. Goldman’s analysts predict this will triple over the next 20 years to reach 18 percent, as the total value of EM stocks overtakes those in developed markets.

“Investors are still keen to invest in the slowly growing and highly indebted markets in Western Europe and the United States, when there are markets to the immediate east and south growing fast without much leverage,” he said. “There is a lot of uncertainty in the market at the moment, but regardless how the short term plays out, the structural, long-term case for emerging markets is stronger than ever.”

Numerous studies show that the long-term average return on equity investments is 8 perent a year, which means your money is supposed to double every 10 years or so. However, if you invested $100 in a pension investing into traditional markets in 2000, you would have $103 now. If you count inflation into the equation, then these investments have actually lost money. At the same time, the same $100 invested into EMs would have soared seven-fold and be worth $700 today.

In emerging markets, equity values will continue to soar, rising to $37 trillion in 2020, before overtaking the developed world to reach $80 trillion in 2030. That’s a six-fold gain over 20 years, after which China’s stock market will make up half of all the wealth on the planet, with America coming in second.

In the last year, India and China’s stocks have already risen strongly, but analysts say that these markets are starting to slow. Russian stocks remain the cheapest in the world when measured on a ratio of the price of the stock to the earnings of the company.

“As a Westerner, I’m somewhat alarmed at the pace of our relative decline, the fact many Americans and Europeans will have to endure falling living standards and the inevitable political fall-out that they will bring,” said Liam Halligan, Prosperity Capital Management chief economist who manages $3 billion of investments in Russia. “But as an investor, it seems to me that emerging markets are where the action is and where the bulk of one’s capital should be.”