A quest for harmony 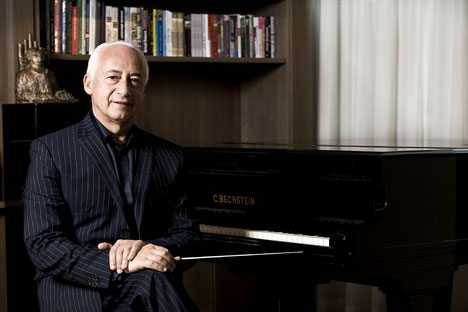 The only way to preserve humanity is throughculture," said Vladimir Spivakov, shown here in his Moscow office.Source: Igor Huzbasic

World-renowned violinist and patron Vladimir Spivakov focuses his talent on the most vulnerable segment of society – children.

Vladimir Spivakov, impeccably dressed, relaxed without being nonchalant, has finally found a comfortable position on the leather couch. His office in the Moscow International Performance Arts Center, where he is musical director, clearly reflects the maestro: sober, elegant, sophisticated and filled with unassuming yet daring works of art. The day before, the conductor led a final concert of the season with the Youth Symphony Orchestra, which is made up of talented young musicians from every country in the former Soviet Union. The orchestra spent a year playing the capitals of the Commonwealth of Independent States (CIS), from Moscow to Baku, as well as New York and Paris. “There were no translators on stage,” the conductor explains. “We all spoke the same language, that of music.”

At the age of 66, Spivakov is one of the most renowned violinists and conductors of our day. This month, he is again touring the United States, from Bethesda to San Francisco and on to New York's Lincoln Center with his Moscow Virtuosi Chamber Orchestra, a group of Russia's top-ranking soloists, and one of the most sought-after orchestras in the world. "What this violinist has achieved with this group is remarkable," wrote The New York Times.

In his deep, booming voice, he talks about the the joys of his most recent tour, and of seeing Azeri and Armenian children eating and dancing together: “This is an essential unification project. The mood isn’t always conducive to dialogue, but by bringing together Kazakh, Turkmen, Tajik, Ukrainian and Georgian children, we remind ourselves that the time has come to build together. The success of our endeavour proves that culture can’t be split up,” said Spivakov, who has worked as a UNESCO Artist for Peace since 2006.

Since 1994, the Vladimir Spivakov International Charity Foundation has been helping children with bursaries, instruments, medical care, shows and concerts.

Over 10,000 children have received support, transportation, encouragement and have simply been treated with kindness. “This is my life’s greatest work,” Spivakov explained without false modesty. This generosity, often praised by those who know him the world over, also comes through in how he defines his profession. “An orchestra is the unity of the masses,” he said, quoting the poet Marina Tsvetaeva, “but it’s especially the capacity of each and everyone to support each other and to cover the faults of the next person.”

Spivakov is a social philanthropist, but he is also a virtuoso known for being solitary. “Solitude is essential for the musician, and music is protection against public life,” he noted. Yet he is equally as passionate about his work as a conductor and spares no effort when it comes to organizing first-rate festivals. He finds it especially hard to resist the artistic genius of his friends and invitations to collaborate.

The International Performance Arts Center’s new season was recently launched with a sneak preview screening of the animated musical production The Ugly Duckling.

“When [director] Garri Bardin came to see me with his project, I saw an exceptional artist who was passionate about his work even before it was conceived he already knew every last detail,“ Spivakov said. “I also saw a big kid.” Spivakov immediately accepted to help with the production’s soundtrack by leading the National Philharmonic Orchestra in an arrangement of "Swan Lake" and Tchaikovsky’s "The Nutcracker."

“It’s a Chaplinesque film, but in a Russian setting, a fairy tale that criticizes intolerance of others while celebrating inner beauty,” he said of the movie, an adaptation of Hans Christian Andersen’s tale combined with George Orwell’s "Animal Farm." Invited by Bardin to play the role of the hateful rooster, it is obvious that Spivakov enjoyed the journey back to his own childhood.

Spivakov, 66, has no end of projects on the go. He recited an endless list of dates worldwide and said he is delighted with the intensity of his life and would not change it for anything. The year ahead will be marked by the American tour, but also by familiar events such as the “Vladimir Spivakov Invites…” Musical Festival in Moscow or the Colmar Festival that the maestro has directed every summer since 1989. That does not include the concerts in Moscow . Are there enough hours in the day? “I sleep little and I always work on the plane. My best ideas come to me in the air,” Spivakov said.

Music in Russia Viral in Russia