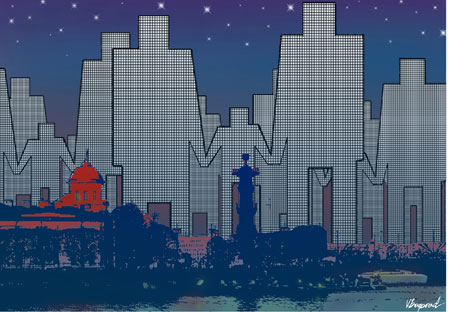 Monuments to Russia’s new power and wealth have been sprouting up and testing the limits of new construction and city development. But as geography constrains expansion, Russia’s “cities of the future” are forced to concentrate within the country’s dense cultural and historic urban milieu. This development has pitted preservationists, who decry the havoc wreaked on the fabric of historic cities, against politicians and businessmen, who believe that historic neighborhoods should make way for a truly modern metropolis.

Nothing symbolizes these tensions better than the planned construction of Gazprom’s 1,322-foot-tall Okhta Center skyscraper in St. Petersburg. Plans to build a modern tower in the historic center of Russia’s iconic city have made headlines, caused protests and propelled UNESCO to take action over this Russian World Heritage Site. The project is planned for a plot on an abandoned industrial site on the banks of the Neva and Okhta rivers, across from the 18th-century Smolny Cathedral. It’s hoped the construction, which is expected to cost more than $2 billion, will bring a much-needed economic boost to a city that has long suffered in Moscow’s shadow.

Representatives of the British-based firm RMJM, which designed the project, describe the proposed tower as an organic, baroque composition, inspired by celebrated city landmarks like the Peter and Paul Fortress, St. Isaac’s Cathedral and the free-flowing water of the Neva River. The Okhta Center has been in the works since 2005; Gazprom planned to finish construction by 2016. The project has garnered some high-profile support, including that of Governor Valentina Matviyenko. Prime Minister Vladimir Putin, a native St. Petersburger, has officially refused to become involved in the argument, in what many critics saw as tacit support for the project.

The spire of the Peter and Paul Cathedral, currently the highest point in central St. Petersburg, is less than one-third of the height of the proposed Gazprom building. Current legislation limits the height of the buildings in the district selected for the Gazprom tower to 100 meters (closer to 325 feet). But the St. Petersburg government passed an ordinance in September of 2008 bending this rule for the Okhta Center.

“No one’s ever suggested putting up a building of that height in St. Petersburg before,” Vladimir Popov, the director of the Architects’ Union of St. Petersburg, told Radio Free Europe. “Ours is a horizontal city, the center of which is protected by UNESCO. There are very few vertical buildings in the city.... That’s why we think the construction of a tower is absolutely inappropriate—it’s simply barbaric fantasy.”

The city, designed mainly by Italian architects, was built on a network of canals and has been dubbed the Venice of the North. Local opposition to the Gazprom project has been fierce, as opponents argue that the tower’s modern design, which locals derisively call “kukuruzina” or the corncob, would dominate the city’s skyline if built. A poll conducted in October to gauge how residents feel about the proposed tower showed that 72 percent of respondents oppose the skyscraper.

President Dmitry Medvedev waded into the controversy in May by urging the St. Petersburg authorities to reconsider the height of the controversial skyscraper.

UNESCO, the United Nations’ cultural arm, opposes the construction of the Okhta Center, saying the tower may spoil the skyline in the city’s historical center. The Kremlin’s letter, signed by presidential aide Sergei Prikhodko, was also sent to the Federal Service for Protection of Cultural Heritage, said the service’s head, Alexander Kibovsky. He said Medvedev highlighted an appeal by UNESCO’s World Heritage Committee to suspend all work on the construction of the Okhta Center and consider “alternative options concerning its height.”

UNESCO, which has been tracking the situation with the Okhta Center since 2006, has warned that St. Petersburg may be struck off the World Heritage list if the tower is erected. Last year, the World Heritage Committee passed a resolution calling for the project’s implementation to be halted. UNESCO experts visited the construction site in March, but this did not change their position.

Russian courts have so far thrown out all lawsuits against Okhta filed by critics who claim that the Okhta Center violates international regulations on world heritage, because it will ruin the skyline in the historical part of the city. But in what looked like a glimmer of hope, the Constitutional Court ruled in July that such construction projects must comply with Russian and international laws, thereby obliging lower courts to take such regulations into consideration, the Kommersant daily reported. Thomas Barry, the construction head at the Arabtec Holding, which won the $2.7 billion contract to build the Okhta Center complex, said in July that Gazprom Neft has not changed its plans.