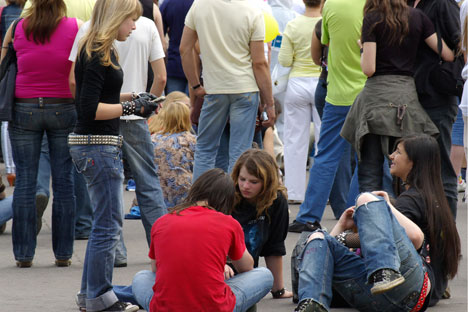 After decades of wearing the same shabby apparel, the most important thing in Russian appearance is not to look worse off than others.

It is hard to think of another nation that makes so little effort on its wardrobe than the United States. Two city trendsetters, namely New York and Los Angeles, are the exceptions that, in fact, prove the rule. Americans manage to combine what does not match at all; a sense of elegance is replaced with one of simplicity and comfort.

Historians suggest that the young nation has been too busy for appearances. “The crucial attention was given not to a product’s perfection but to its functionality,” Daniel Boorstin wrote in “The Americans.” Less drama over clothes allows people to pursue something truly productive and important, like work, study and family.

Now, in Russia we see a totally different situation. Once a person enters an office or metro train, he will be “scanned” with gazes to determine his status.

The most important thing for the Russian is to not be worse off than others. This is truly remarkable: The average person doesn’t want to be better than others; he is just concerned about not being worse. He either looks at a stranger with condescension or shows servility. An attendant in a luxury boutique, for instance, promptly becomes more polite to a potential customer in a fur coat instead of a sports jacket.

Some offer an economic explanation to this snobbish behavior. Russians were deprived of elegant goods and forced to wear low-quality Soviet products. A Westerner can hardly imagine a miles-long line for bras or shoes. It was a miracle to buy a bottle of Polish nail polish; a French perfume remained a pipe dream. Those few who traveled abroad and returned with trendy clothes occupied a privileged position.

The system of “equality in poverty” was destroyed with the collapse of the Soviet economy. As a result, the income of the wealthiest 10 percent of Russians is 16 times higher than that of the poorest 10 percent, while in large cities, according to unofficial calculations, the difference reaches 40 times. In Europe, the ratio is four to six times, in the United Stares it is 12 to 13. Moscow is among the most costly cities in the world, with irritating contrast between luxurious cars and dirty Soviet jalopies, glamorous bags of prosperous long-legged young women and shabby coats of seniors whose scanty pensions hardly cover their basic needs.

The cult of power and splendor is on top today in Russia. Economists assume that decades of stable onward development must pass before the nation will give up its habit of evaluating a person solely on the car he drives or the clothing he wears and instead shape other symbols of respect and success.